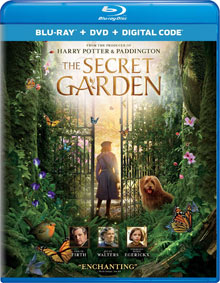 The Secret Garden tells the story of Mary Lennox (Dixie Egerickx), a prickly and unloved 10-year-old girl born in India to wealthy British parents. When they suddenly die, she is sent back to England to live with her uncle, Archibald Craven (Academy Award® and BAFTA winner Colin Firth), on his remote country estate deep in the Yorkshire moors. There, she begins to uncover many family secrets, particularly after meeting her sickly cousin, Colin (Edan Hayhurst), who has been shut away in a wing of the house. Together, these two slightly misfit children heal each other through their discovery of a wondrous secret garden, lost in the grounds of Misselthwaite Manor. A magical place of adventure that will change their lives forever. (from iTunes) 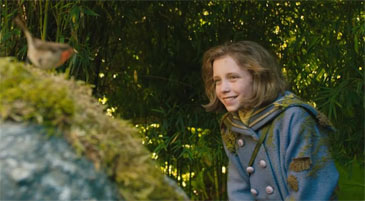 Originally published in 1911, The Secret Garden, by Frances Hodgson Burnett, is a tale that has been told and retold for generations. I remember watching one of its iterations--in part or in its entirety--in class in elementary school. Recently, Apple offered a Karen Gillan-narrated audiobook of The Secret Garden completely free on iBooks, which sparked my own family's interest in the classic tale (and I believe it's still free on there if anyone's interested). But in 2020, the story has been reimagined in theatrical form by director Marc Munden, who sets the story in 1947 in this version, and further changes things up from its source material.

From the start, Munden aims to give the movie an indie, artful feel. Unfortunately, this approach doesn't really work for this kind of film, giving its start feel choppy and disjointed. We're meeting Mary for the first time and are learning about her parents' death and her newfound desolate lifestyle, but Munden tells it in a dreamlike way that disconnects the viewer from Mary and her story. I found it off putting at best, and more a disservice to the story than a strength. As little Mary Lennox, Dixie Egerickx does as best as she can with the material at hand, but she can only do so much with Munden's direction and the film's editing. Thankfully, after its dismal beginnings, things start to take form upon her arrival at Misselthwaite Manor, but not before Munden continues to bombard the audience with cryptic scene after cryptic scene of Mary daydreaming, being fully awake, thinking she's hearing ghosts, and then everything creepily blending into one another (a moment where she's talking to her cousin Colin while he's confined to his bed and a memory of her father jumping out to scare her merge in an unsettling way when he pops out from under Colin's covers and it transitions to the memory). If Munden is trying to convey that Mary's life has become a living nightmare, he's done a good job, but the fact that the film is aimed at children, it's more likely that they'll be more confused, terrified and disturbed by some of these scenes than enchanted by them. 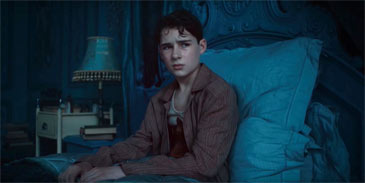 Upon Mary's discovery of the garden, the movie takes a significant turn towards the better. Munden still makes some odd choices, but the heart of the story really gets revealed once she strikes up a friendship with the caretaker's brother Dickson and her cousin Colin. Mary digs into the mysteries of the garden (and oddly entrusts nearly everyone she meets with her "secret" of it), and the relationship between her mother and her mother's sister--who is Colin's mother. Both have passed, leaving the children brokenhearted and hopeless, but it's through their friendship as cousins that the two begin to find healing. And herein lies the real heart of The Secret Garden. Colin's grumpy father, Archibald Craven, played by Colin Firth, is an almost villain in the story, but the film redeems the broken man before its end, which lends a great deal of weight to the story.

It's funny, because as I write about aspects of the movie that I didn't care for, I wonder why I don't just give it a lower rating, but really, the last half or so of the movie does make up for that which precedes it. The garden itself really is beautiful, and the filmmakers do a great job merging imagery from real gardens in Britain with some digital enhancements. Thankfully, the digital effects are kept to more of a minimum, and the movie is better for it. The kids in the film are also quite good; the movie just wouldn't work otherwise. Firth's Archibald remarks later in the film about how parents can learn from their children, and it's interesting food for thought about how the worldview of a child can be more hopeful and pure than that of adults who've been marred and scarred by the weight of adulthood and the burden of loss. The Secret Garden is a thematically heavy film, and definitely not "for the whole family," but it has its moments that pull at the heartstrings--in a good way. 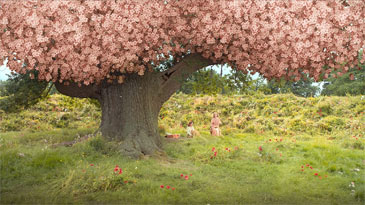 The content isn't too rough, but sometimes it can be a bit heavier than you might expect. In the first 7 minutes of the movie, Mary's parents die and she's left to live life alone in their home till she's discovered and taken to live with her uncle. As she's transported, we see a man hobble by with a full view of him missing the lower half of his leg. It's healed over so there's no gory wound, but it's definitely visually startling and unsettling. A lot of the imagery Munden uses to set up the film is meant to show us the harshness of post-war life in 1947, and make you sympathize with Mary for her troubles. Still, the dreamlike way he portrays this is more creepy than anything at times, and it muddles up the movie more than it should (For example, while we hear the harshness of war in the distance, Mary plays with dolls by candlelight in her tent as she talks about battling demons). The only other potentially gross visuals come in the form of a dog who gets its leg stuck in a bear trap. We don't see the wound right away, but later get more of a quick look at the bloody fur around its leg as Dickson cleans it. There is no profanity, and no sexual content, but it's a little weird that, when Mary introduces the socially awkward Colin to Dickson, that the only thing Colin says is "He's handsome," to which Mary oddly replies, "and he can whistle!"

While the worldwide pandemic postponed the theatrical release of The Secret Garden enough to earn it a direct-to-home release, I'm not sure it would have found much of an audience in theaters. It's decent, but not great, with the players (and the garden itself) being the only aspects that help elevate the film. With their talents, the story is able to pack the emotional punch it needs to make its bleak journey worthwhile.


The Secret Garden is available on Blu-Ray/DVD/Digital, DVD, and through the usual digital providers (including in 4K, digitally).

Along with the feature film, the Blu-Ray disc includes the following extras (in addition to the "Official trailer"):

Characters (3:17) - This is a quick rundown of each central character in the movie, including how they added the dog character to the film (which wasn't in the book).

Concept to Reality (3:50) is about the "magical realism" of the film. The filmmakers and actors talk about the story and how, when Mary arrives, the Manor is as broken as Mary is. We also learn here that they shot as much of the movie as they could on location in the best gardens Britain has to offer, stitching them all together to look like one big garden.

Page to Screen (2:45) is about the story enduring through the years -- and how the movie is a modern story, yet told in a period setting.

Overall, the film looks excellent in HD (I wouldn't recommend seeing it any other way), and is beautifully shot, but the "extras" offered with it are rather thin and minimal.

Sex/Nudity: When Mary introduces the socially akward Colin to Dickson, that the only thing Colin says is "He's handsome," to which Mary oddly replies, "and he can whistle!"

Blood/Gore: A man walks by Mary on crutches who is missing the lower half of his leg (its healed over); We see a slightly bloody wound on the dogs leg as it's cleaned in a stream.

Violence: In the opening scenes, Mary hears loud and violent noises (war sounds?) and she's scared. To escape her fears, she creates shadow puppets about demons on her tent wall; She wakes to find her parents missing and her house empty; Mary hears gun shots in the distance; Man walks by on crutches missing lower half of his leg (its healed over) (*Note: This is all in the first 7 minutes if parents might want to skip this for their children*); Mary stomps her foot in protest; Mary hears crying and moaning in the house at night and believes it to be the ghosts of soldiers who were helped in the house during the war (it's not); Marys father pops out of bed covers to scare Mary, but the memory starts in Colin's bed and flashes to be a memory from her past; A dog growls at Mary; The dog gets its foot caught in a bear trap and whines. Mary frees it and it runs away; Mary falls off the wall and tumbles down the hill; We see a flashback of Mary banging on her mother's door. Her father says she's sick, and Mary yells for her to get on and die; We see a slightly bloody wound on the dogs leg as it's cleaned in a stream; Colin yells at Mary. He screams when she raises her hand and covers his mouth. He falls out of his wheelchair to the floor with Mary; In anger, Mary knocks over a wooden horse in her room; We see the mansion on fire. Mary rushes in to save Mr. Craven. They then cough and stumble through the manor trying to get out with flames all around them. Craven trips and falls as Mary begs for him to get up; They move through the house more and fall down the stairs in the foyer of the manor. Disclaimer: All reviews are based solely on the opinions of the reviewer. Most reviews are rated on how the reviewer enjoyed the film overall, not exclusively on content. However, if the content really affects the reviewer's opinion and experience of the film, it will definitely affect the reviewer's overall rating.