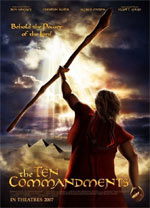 - for some mild peril. 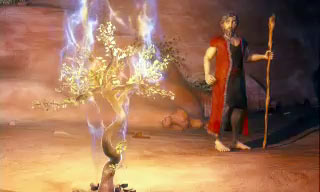 Condemned to die by Pharaoh while just a baby, Hebrew Moses is set adrift on the River Nile by his mother and his sister. Rescued by the daughter of Pharaoh, he grows up thinking he's an Egyptian prince. Eventually exiled from Egypt when he is exposed as a Jew, he is touched by God, and told that he will lead his enslaved Chosen People to the Promised Land. With the hand of God firmly on his shoulder, and with faith as his only weapon, Moses performs miracles, casts down plagues, evades a pursuing Egyptian army, parts the Red Sea and, after forty years of leading the Hebrew Chosen Ones to the Promised Land, is embraced by God and led to a better place. (from EpicStoriesoftheBible.com)

The story of Moses leading his people out of Egypt is one of the more popular old Testament stories. It's been made into almost countless TV and big screen films over and over again, from the award winning The Ten Commandments in 1956 to 1998's animated The Prince Of Egypt. Last year, the story was filmed as a musical and this year returns once again to the big screen as a computer animated feature film called The Ten Commandments.

The first thing noticeable about the computer-animated version of The Ten Commandments, is its low budget presentation. The animation is unmistakably straight-to-video quality, and movies like those of Pixar Animation Studios (The Incredibles, Cars, Finding Nemo), Fox (Ice Age), Sony (Open Season) and DreamWorks (Shrek, Over The Hedge) have raised the bar so high, it's embarrassing to see a film of this animation quality in 2007. It's tempting to compare the look of The Ten Commandments to that of video game cut scenes, but even most video games these days look better than the animation here. At times, the characters walk and move so stiffly and some characters look so lifeless, that it seems as though the animation is unfinished.

Animation aside, the voice acting for the movie is pretty good. Alfred Molina brings an immense amount of life to the otherwise rigid Ramses, and although Christian Slater's signature voice is far from imaginable as Moses, he does a fine enough job. Elliot Gould, who may be most recognizable in recent years from the Ocean's movies, is fantastic as the voice of God, while Ben Kingsley (who actually played Moses in a TV film) adds an almost elegant quality with his voice as the narrator. 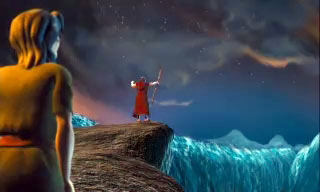 The film's script isn't all that strong, but it takes plenty of cues from scripture when it matters most. There's also a few artistic liberties taken with some facts, however. The gnats in the plagues are changed to lice and an earthquake is caused by Moses smashing the tablets, which then swallows the golden calf and a few of its worshippers. But the biggest change is one that The Prince Of Egypt also treaded softly with. In the scriptures, it's pretty clear that Moses deliberately kills an Egyptian guard he sees mistreating a Hebrew slave and then tries to hide the guard's body. The next day, it's revealed that the body was found and Pharoah tries to kill Moses but he flees. In The Ten Commandments, it's pretty evident that Moses kills the guard by accident in self-defense and he flees that day, but his life is spared by Pharoah because he is his grandson and he's thrown into the desert. It's minor, but parents will need to clear up the details with their children with things like these.

The mood of The Ten Commandments is pretty consistent, but at times it strays in strange directions. Overall, it takes itself seriously with a few smile-worthy moments along the way, but one character in particular is so sorely out of place, it gives the film a cartoony feel whenever he's present. Although he's just one of the standout complaining Israelites, he looks more like one of the Mario Brothers in an overtly colorful outfit and with a whiney voice than an Israelite. Nitpicking aside, the central characters are done well and are fine for carrying the story forward. The only other possible significant problem the film does suffer a little of, however, is that parts feel a bit rushed to fit the story within its hour and twenty minute length. Moses' time in Egypt is especially brief, and where Prince Of Egypt concluded with the Red Sea encounter, The Ten Commandments summarizes Moses entire life up until his people reach the Promised Land. It's a lot of time to squeeze into a family movie, but given what The Ten Commandments manages to accomplish, it's handled to the best it probably could have been.

The Ten Commandments is a good film for the family, offering a strong message about trusting God and following His call, but the poor animation quality is tough to overlook. It's to the point where the film may have benefited from being hand-drawn instead. However, some unique camera angles, sweeps and effects sprinkled throughout that couldn't have been accomplished with hand-drawn animation do come as little surprises in the film. However, as a whole, The Ten Commandments is an underachievement in Biblical storytelling, which is a shame. If the film had a stronger composition, it may have garnered a wider appeal. Instead, The Ten Commandments merely looks like a straight-to-video effort from a decade past that is somehow making it to the big screen in 2007.

Sex/Nudity: None. When the Israelites create the golden calf, we see some of the women have changed their robes to almost-tube tops and become self-conscious of this when Moses appears

Alcohol/Drugs: Some Israelites appear drunk when dancing around the golden calf (and drinking)

Blood/Gore: We see blood on a knife after Moses kills the guard; We see all water turn to blood with dead fish floating to the surface; God turns Moses' hand to look diseased briefly as a sign to show Ramses; Some characters appear to have scars on their skin during the film; The Egyptians are struck with sores as part of the plagues; We see some blood smeared above doorways for the passover

Violence: The Pharoah orders that all Jewish babies be killed; Moses and Ramses wrestle playfully but cause a fountain to collapse; Moses accidentally kills an Egyptian guard who fights him; Moses is hit in the face with a staff and knocked out; We see some slaves being mistreated; One of God's plagues kills all the first born of Egypt; The Red Sea collapses on top of the Egyptian army, killing them; Moses throws the tablets to the ground and it causes an earthquake which swallows the golden calf and some of its worshippers Disclaimer: All reviews are based solely on the opinions of the reviewer. Most reviews are rated on how the reviewer enjoyed the film overall, not exclusively on content. However, if the content really affects the reviewer's opinion and experience of the film, it will definitely affect the reviewer's overall rating.