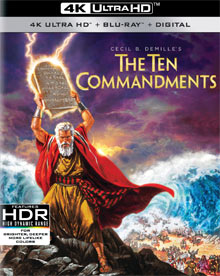 Moses, an Egyptian Prince, learns of his true heritage as a Hebrew and his divine mission as the deliverer of his people. (from IMDb) 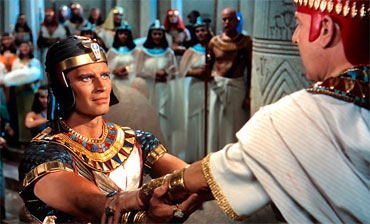 Cecil B. DeMille's 1956 epic, The Ten Commandments, is still one of the most impressive in film history. The nearly 4-hour movie ambitiously sets out to tell the story of Moses in a far more detailed way than the pages of the Old Testament does. DeMille referenced the writings of ancient historians, Philo Judaeus and Flavius Josephus, to flesh out the Egyptian years of Moses' life - something the book of Exodus largely leaves out. One must assume The Ten Commandments takes some great artistic liberties to bring this story to the big screen, but the end result is a reverent and inspiring film that stands the test of time.

The story of Moses has been told time and again on film through the years, but The Ten Commandments may just be the ultimate version. Cecil B. DeMille went to great lengths, with a truly impressive production, to tell this amazing story. Screen legend Charlton Heston was an inspired choice to play Moses, while The King and I's Yul Brynner is equally fantastic as his rival, Ramses. To complete a love triangle between the two leads, Nefretiri is played wonderfully by Anne Baxter, and Edward G. Robinson steps in as a foil for the Israelites as the creep, Dathan. Other standout performances include Debra Paget as Lilia, John Derek as Joshua, and Yvonne De Carlo as Sephora. The sets and production values of the film are truly impressive - from some scenes filmed on location in Egypt to towering Egyptian sculptures and sprawling scenes containing 14,000 extras working to build cities in Egypt. The attention to detail in this production really lends a sense of authenticity and wonder to it. 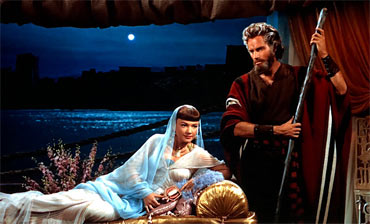 This 2021 4K debut of The Ten Commandments utilizes a 2010 6K scan of the movie to deliver the most beautiful presentation of the film ever shown. According to the press materials for this new release, Paramount Pictures reportedly spent an additional 150 hours cleaning up the image and enhancing the color of the picture -- and it shows. It's definitely a noticeable improvement on the picture. The 4K disc allows the entire film to be viewed on a single disc, while the bundled Blu-Ray discs split the movie up onto two separate discs. (I'm a stickler for wanting all of a movie to make it onto one disc if possible.)

Thematically and spiritually, The Ten Commandments is an inspiring movie. The story follows Moses as an Egyptian prince (which makes sense), living his life in service of the Pharoah and working towards eventually inheriting the throne for himself, before learning about his true Hebrew heritage. And Moses doesn't just naturally and immediately assume a faith in the God of Abraham; as Moses grows to understand his Hebrew heritage and brethren, he begins to develop his belief in and reliance on God. His inevitable showdown with Ramses, and Ramses' eventual admittance that the God of Moses is indeed the one true God, is incredibly satisfying and inspirational. DeMille and his team do a great job telling the story about the strength, power, and vanity of men, and how it leads to the compassion and freedom that comes from the liberation of the Israelites. Then, of course, there's the finale where God gives Moses the Ten Commandments and he descends the mountain only to find the Israelites have given themselves over to sin and debauchery. It's a sad sight, and one that feels a bit too eerily relevant to the current self-absorbed world we're living in. 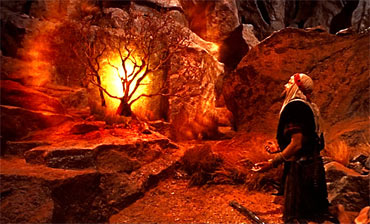 The film is rated G, and is intended for most audiences, but there still are some pretty intense themes and moments. For starters, the scenes depicting the slaves may be too much for the younger viewers. There's a scene early on where a woman is nearly squashed by a large stone that the slaves are pushing and she gets caught behind it. She does get rescued, but for a few tense moments leading up to that, it seems like she might actually meet a horrible demise. Other scenes depict slaves getting whipped, sometimes with a little blood, and one such scene shows an Egyptian hurl a blade at a slave that stabs and kills him (with a little bit of blood). Like the Biblical story of Moses, he does kill an Egyptian in this story, and specifically by strangling him (but not before the man whips another man). But in probably the film's most emotional sequence, one of God's plagues threatens to kill the firstborn of Egypt. As such, we see a couple men drop dead as a creepy dark mist drifts across the ground. It also takes the life of a young Egyptian boy, which may upset some viewers, and we see the boy's dead body in a couple scenes afterwards. Another plague turns all of the water of Egypt to blood, so we see the water has turned blood red during a lengthy sequence. Lastly, when the Israelites build their golden calf and descend into a gigantic party of immorality, the narrator describes their acts as adultery and we see them dancing and pouring wine over each other and pulling at each other's clothes. It's not too explicit, but it does get the point across.

The Ten Commandments is a fantastic Biblical cinematic epic and the new 4K UHD presentation only enhances this. It's a wonderful and inspirational story that has impacted generations, and it's one that is still worth revisiting 65 years later. If you've never seen the movie, there is no better time than now to remedy that.

Sex/Nudity: Throughout the film, we see many, many men without shirts and sometimes wearing minimal loin cloths (especially slaves). Some women show cleavage in their dresses, while others where dresses that expose their stomachs. However, no outfits are especially revealing or inappropriate; Baka, the Master Builder, takes Lilia to the palace and dresses her up (with other intentions); The narrator mentions that the Israelites engage in adultery while worshipping the golden calf. It's implied, but not shown, that many engage in immoral sexual acts during this time.

Alcohol/Drugs: The Israelites make wine while worshipping the golden calf. At one point, we see someone pouring wine into the mouth of someone tied up.

Blood/Gore: A man holding a blade over a crib has blood on the blade and the crib, but we do not see the dead child; Joshua appears to have a scar on his shoulder; We see blood on a man's shoulder after being whipped. Hes then hit with a blade in the abdomen. He has blood on his hand and theres blood on the blade and Moses hand (who comes to his aid) as he dies; Baka puts a whip around Joshua's neck and pulls it off fast so a bloody scratch appears on his neck. He then whips Joshua twice and we see a couple bloody scratches on his body; Aaron touches Moses' staff to the water and it turns red with blood; Joshua smears lamb's blood on a door frame. We see more on Moses door frame and later on Dathan's;

Violence: We see slaves in Egypt pulling ropes with the sound of whips cracking; After the murder of all children was ordered, we see a man holding a bloody blade over a crib (with some blood on the crib) and the child's mother standing by looking wide-eyed in shock; We see slaves working and one lying on the ground trying to carry bricks. A man whips him once lightly; Lots of slaves are show pulling on ropes with Egyptian soldiers standing by and whipping; An Egyptian throws a woman aside who is trying to stop him; A woman's sash gets caught under a sliding rock. Other slaves cry for help and are pushed away. Joshua swings down to help and gets hit and wrapped in a whip. Moses finally intervenes and cuts the woman free; Ramses shoves Nefritiri down in anger onto her bed after they briefly kiss; The slaves raise a large obelisk and some fall as the ropes break; Nefritiri angrily pushes an old woman off screen and we hear her scream and then be silent. We soon learn that she had pushed her off the balcony to her death; We see blood on a man's shoulder after being whipped. Hes then hit with a blade in the abdomen. He has blood on his hand and theres blood on the blade and Moses hand (who comes to his aid) as he dies; Baka lunges at Joshua with a knife and Joshua punches him. He gets caught and tied up. Baka puts a whip around his neck and pulls it off fast so a bloody scratch appears on his neck. He then whips Joshua twice and we see a couple bloody scratches on his body. Moses grabs his whip and then strangles Baka to death; We see Moses in chains a couple times; Some men push a woman down. Moses jumps in and fights them off with his staff; We see an old man die on his bed (not bloody or disturbing); Aaron touches Moses' staff to the water and it turns red with blood; Hail rains down on Egypt and fire spreads on the ground; Joshua smears lamb's blood on a door frame. We see more on Moses door frame and later on Dathan's; We hear cries of anguish through the night as the firstborn of Egypt die; A man drops dead in the street; Another Egyptian drops dead at Ramses' feet; Nefritiri carries their dead son and hands him to Ramses. Ramses places him on an Egyptian altar and we see the dead boy's body, covered in a cloth a few times after that; Ramses pushes Nefritiri to the ground; A pillar of fire blocks the pursuing chariots; The Red Sea collapses in on the chariots, drowning many of the Egyptians; Ramses raises his blade over Nefritiri to kill her. She then stops him and asks to see Moses' blood on the blade first. He then drops it in defeat; A man strikes another with chains; The Israelites try to sacrifice Lilia to the golden calf, but she is eventually rescued; Moses throws the Ten Commandments at the golden calf and it explodes. The ground opens up with fire and people fall in the crack. Disclaimer: All reviews are based solely on the opinions of the reviewer. Most reviews are rated on how the reviewer enjoyed the film overall, not exclusively on content. However, if the content really affects the reviewer's opinion and experience of the film, it will definitely affect the reviewer's overall rating.