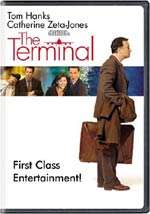 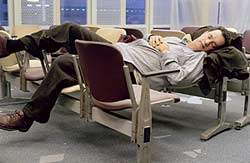 The Terminal tells the story of Viktor Navorski (Tom Hanks), a visitor to New York City from Eastern Europe, whose homeland erupts in a firey coup while he is in the air en route to America. Stranded at John F. Kennedy International Airport with a passport from nowhere, he is unauthorized to actually enter the United States and must improvise his days and nights in the terminal's international transit lounge until the war at home is over. As the weeks and months stretch on, Viktor finds the compressed universe of the terminal to be a richly complex world of absurdity, generosity, ambition, amusement, status, serendipity, and even romance with a beautiful flight attendant named Amelia (Catherine Zeta-Jones). But Viktor has long worn out his welcome with airport official Frank Dixon (Stanley Tucci), who considers him a bureaucratic glitch, a problem he cannot control but wants desperately to erase... (from theterminal-themovie.com)

Tom Hanks is arguably one of the best actors of today. He's as versatile as being able to pull off an obsessive compulsive cop who has to take care of a hazardous mutt (Turner & Hooch), a cross-dressing college student trying to get into the women's dorm (TV show Bosom Buddies) to a gangster father (Road To Perdition) and a high-strung Fed Ex employee stranded on a deserted island (Cast Away). When I saw the trailer for Spielberg's latest venture, The Terminal, I knew right away they'd picked the right man for Viktor Navorski.

The story centers around Navorski's misfortune of being unable to leave the JFK Airport due to a war in his homeland. Spielberg, with the help of a good writing team, paint a real picture of the kind of guy Navorski is, and we feel bad for him from frame one of the film. The supporting characters also feel real but with almost charicature-like delivery. We can imagine meeting them, but the kind folks that Navorski befriends almost seem too-good-to-be-true. Sadly, one of the most believable characters is the ridiculously shallow flight attendant Amelia whom Viktor meets at the airport. While Zeta-Jones pulls off a great "you like her but you don't" vibe for her, Amelia's worldly an immoral life practices are believable and also not too attractive. Viktor is attracted to her beauty and her kindness towards him, but the very fact she is seeing a married man on the side makes her character more undesirable and we know Viktor deserves better. Some language and the story angle of Amelia's affair (which we never see, just hear about) seems to be what warranted this film's PG-13 rating. But to be honest, I've seen much worse before in some PG films. 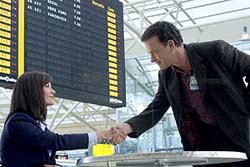 The Terminal is an utterly charming story about Navorski's innocent and rather mysterious fish-out-of-water character. The film has plenty of laughs and several tear-jerking moments. Spielberg seems to have a handle on when and how to tug at the audience's heartstrings. The Terminal is a comedy, a drama, and a romance all in one without ever really becoming one for too long. The film has a classic feel to it and Spielberg indeed pulls it off. Sadly, with just a little snipping here and there on the language, The Terminal could have been a perfect live action summer family film.

While the story may eek some for not being purely believable, the sweet, candycoated nature of the tale is infectious and well worth a viewing if properly received. All in all, I thoroughly enjoyed The Terminal. Hanks was fabulous, turning in one of his best performances in years. Spielberg has a future in quality family films with a classic feel should he choose to explore the genre more. However, some language and minor sexual content is present so you will want to take that into consideration before checking your bags at The Terminal.

Sex/Nudity: Amelia is dating a married man. At one point she makes a comment about the sex being "amazing" and makes a few comments about guys making advances on her. While gambling away unclaimed items left by passengers, Gupta holds up a pair of panties he insists are Cher's.

Alcohol/Drugs: Some people have some drinks. Frank claims an employee brings in marijuana and liquor. A man is caught trying to smuggle drugs through baggage check.

Violence: Amelia falls on a wet floor and breaks the heel off her show. Viktor falls on a wet floor in a later scene. Some guards get rough with a passenger at the airport who is upset. Frank pushes Viktor into a copy machine. Disclaimer: All reviews are based solely on the opinions of the reviewer. Most reviews are rated on how the reviewer enjoyed the film overall, not exclusively on content. However, if the content really affects the reviewer's opinion and experience of the film, it will definitely affect the reviewer's overall rating.