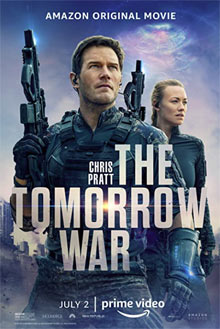 A family man is drafted to fight in a future war where the fate of humanity relies on his ability to confront the past. (from IMDb)

Twenty Five years after humanity fought off an alien invasion on the 4th of July in Independence Day, Paramount Pictures and Amazon Prime Video have brought movie fans another futuristic alien encounter with The Tomorrow War. Starring, and executive produced by, Hollywood superstar Chris Pratt, The Tomorrow War is about soldiers from almost thirty years in the future who come back to 2022 to recruit people to fight a war with aliens in their time. It's not nearly as large scale as the ambitions of Independence Day, but it's no less entertaining. And, if anything, The Tomorrow War just has a little bit more heart (and perhaps less blatant American patriotism) than the aforementioned 1996 box office smash.

The Tomorrow War is just another one of the many films affected by 2020's global pandemic. Paramount/Skydance had financed the film and reportedly sold it to Amazon for exclusive distribution for a whopping $200 million. It's actually unfortunate, in a way, because while it has become the top streaming film in its debut weekend (according to a social media post from Pratt), it's definitely the kind of movie best experienced on the biggest screen possible. This movie feels tailor-made for the theater experience, not just your home TV screen (much like Godzilla vs Kong translated so much more strongly on IMAX than the home theater). To be fair, a movie's life is short-lived in theaters, but I couldn't help feeling on more than one occasion that this movie would have been awesome on the big screen (especially IMAX or Dolby).

The story is a neat one, even if it will likely remind viewers of many other films that have come before it - like Terminator, Edge of Tomorrow, Independence Day, World War Z and other alien invasion or time-bending films. While many large-scale disaster/invasion films, like Independence Day to continue that example, include too many characters to follow just one central character, The Tomorrow War centers mostly on Pratt's character, Dan Forester, a science teacher who is also former special ops, who gets drafted (against his will) to fight the war in the future. As he's transported into the most dangerous world of tomorrow, he leaves behind a wife and his sweet 9-year-old daughter, Muri. He finds himself fighting alongside a few experienced warriors, but also other very green, very scared civilians that he must help keep alive as they battle forces unknown. These unknown enemies turn out to be aliens they call "white spikes," which kill their prey by shooting large, nasty spikes out of their tentacles, and eating their victims with gigantic, sharp teeth. They're also super difficult to kill, and hunt in numbers. It's a pretty hopeless, no-win scenario.

I've been a fan of Pratt's since his time in Parks and Recreation, and I think he's done well to make the transition from dopey slacker to charming action hero (surprisingly). From Owen in the Jurassic World series to Star-Lord in the Guardians of the Galaxy movies, and even the western remake The Magnificent Seven, he's proven he can do it. And for The Tomorrow War, he balances that everyday-man kind of persona with the heroics of a leading star, and it helps elevate The Tomorrow War above being just another bargain bin sci-fi action film. Now, in reality, this movie is pretty straightforward about what it is. There's some good character drama involving Dan and his family, with some wonderful scenes set around the midpoint of the movie, but the movie is primarily an action-packed monster flick. The body count is high (although the death moments are seldom all that gruesome), and the alien beasts are shown in great numbers. It's a great summer "popcorn flick" that you just shouldn't overthink or take too seriously. And I think it's good enough to be worth revisiting. The movie seems to be getting mixed reviews from viewers, but it's a satisfying sci-fi action film that delivers on the entertainment when you just want to sit back and be thrilled. It definitely sucked me in and took me along for the ride.

The content of The Tomorrow War is a firm PG-13. At first, with very little language heard in the first 20 minutes or so of the movie, I was feeling like it would be a lighter film in that regard. However, as the events escalate, so does the profanity, and one scene has the character Charlie rapidly using the "S" word about 40 to 50 times in a matter of a few seconds as he's being chased by a white spike. Later, the character Dorian uses the movie's lone "F" word in a casual-yet-stern response to someone's suggestion. Other profanity is a steady mix of what you'd expect from the rating and genre. Violence is intense at times. The monsters themselves are pretty scary looking and intimidating. We see some blood on characters, but none of it is especially gruesome. There's one scene where a large white spike gets a soldier caught in its jaws and it bites the man in half, but it's done right on the edge of the screen--and we see it from behind the monster, so it's not too graphically shown. There's lots of yellowish, gooey blood shown when the creatures are shot or blown up, and we even see the creatures get decapitated a time or two. Finally, there's one very quick shot of a man with an arm missing, and near the end of the film, we see a character drag a knife across their palm to draw blood (to attract a monster). Overall, it's a pretty intense movie, so I'd keep that in mind if any of the younger ones are hoping to see it. 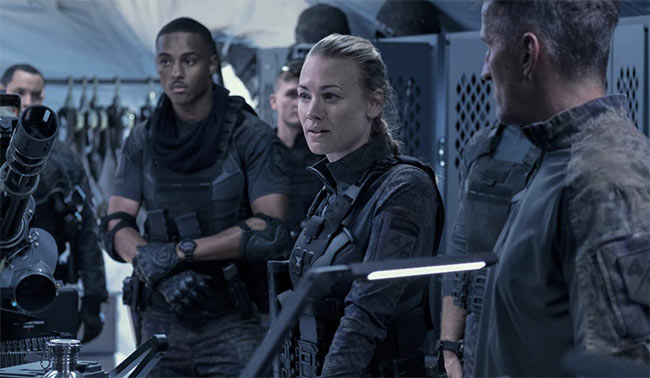 While there doesn't seem to be any spiritual content in the film, the movie's story has a surprising generation-spanning family-centric theme. Dan is estranged from his gruff, military-based father (played by J.K. Simmons), and refuses to let him see his daughter. Things are even more complicated when Dan learns in the future that he's just as capable to commit some of his own father's faults, and the movie offers an encouraging theme about giving - and getting - second chances.

Overall, The Tomorrow War is an enjoyable futuristic alien invasion action movie. It's not super deep, but it doesn't try or pretend to be, and just aims to entertain. A solid cast delivers solid performances (it was great to see Yvonne Strahovski from TV's Chuck here as well), and some fun action sequences involving some really memorable monsters make The Tomorrow War a highlight of the 2021 summer movie season.

Sex/Nudity: James says Dan has a metrosexual look because of his scruff; After James makes a comment about having a job to do, Dan remarks to himself under his breath about his dad, "The job of convincing the world you have a small "d*ck."

Alcohol/Drugs: There's some drinking at a Christmas party at the Forester house; Dan drinks from a beer bottle and throws it in his recycling can; James drinks alcohol while helping Dan. He throws his drink on Dan and grabs him by the shirt; We see Dorian drinking in a bar.

Blood/Gore: Lt. Hart has a star-shaped scar on her cheek; We see people with prosthetic limbs in a therapy session; We see blood splattered on walls, broken windows and floors inside a building; We see a team of people hanging upside down dead in a web of goo; Dan pulls an ax up into a creature's head. Dorian comes and shoots it, killing it, with lots of yellow bloody results; A person is hit with a spike in the chest and thrown back, in slow motion, with a little blood on them; Dan shoots a creature, in slow motion, with it taking hits and then its head is blown off with lots of yellowish blood; Dan has a patch on his shoulder with some blood on it; Some soldiers descend into a pit that has many bones littering the ground; A white spike grabs a solider in its jaws and bites them in half (it's shown quickly and somewhat obscured by being seen from behind the creature); Dan shoots up another male white spike as it charges, killing it with gory results; A helicopter uses its blades to slice up a bunch of the monsters, splattering yellow blood; The colonel gets in a Humvee and uses the gun on top to shoot a bunch of creatures to pieces with yellow-bloody results; A character is hit with a spike and we see blood on their clothed stomach and hand; We see blood on Dan's ear and hand after landing back in 2022. Another man who has just landed is missing an arm and has a bloody stump of an arm (shown very briefly); A creature falls out of an embryo-type sack onto the floor dead and covered in goo; We see lots of yellow goo as Charlie uses a metal blade slicer on the head of a white spike; Two characters shoot at a white spike multiple times, spraying yellow blood. We see lots more yellow blood as they fight with it; A man cuts his hand with a knife to draw some of his own blood to attract the monster; A monster falls and hits a large rock, splattering into a mess of yellow blood and guts; Dan has some cuts on his face.