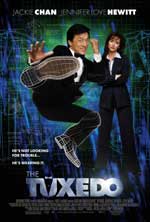 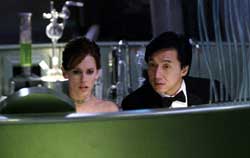 Jimmy Tong (Jackie Chan) is a naive cab drive who's life changes forever when he picks up an agent from the C.S.A. Jimmy is immediately hired for his driving capabilities to serve as the chauffeur for secret agent Dead Devlin. Shortly after Devlin grows fond of having Jimmy along as his driver, he suffers an accident leaving him in the hospital and out of commission, asking Jimmy to serve as a replacement. With that, Jimmy dons Devlin's top secret weapon -- a tuxedo that possess incredible technological powers. Not knowing Jimmy is posing as Devlin, C.S.A. agent Del Blaine (Jennifer Love Hewitt) is ordered to team up with Devlin as they work together to foil a diabolical scheme for world domination.

If you've read reviews on Jackie Chan's latest project The Tuxedo, you'll know it's not being too well-received. Chan has become known for his signature mix of jaw-dropping stunts and physical comedy. In 2002's The Tuxedo, it seems almost blasphemous (and yes I use the term very loosely) to enhance/desecrate Chan's God-given abilities with computer effects. The joy of watching Chan on screen is mostly due to his antics and stunts coupled with his infectious charm, but throw special effects into the mix and it defeats half the purpose. A critic recently complained that because of this, they could have easily put someone like Adam Sandler in the role besides Chan. This is only partly true as Sandler (or most anyone) would have to be almost completely an effect (as Spider-Man often was in that film) because Chan's abilities were still the backbone of all of the action sequences.

For those expecting a realistic movie with extraordinary events that unfold, you'll be extremely disappointed. I found Tuxedo most comparable to the 1994 Jim Carrey vehicle The Mask. Unfortunately, it's not as well done as Mask. The Carrey-fronted comedy was based on a comic book series which explains a lot of the cartoon elements that were incorporated. The Tuxedo, however, is an original. A wannabe

mix of the other Chan buddy movies Rush Hour and Shanghai Noon with the typical fantasy action comedy. While Chan mixed astonishingly well with Chris Tucker and Owen Wilson (respectively), however, lightening could not be struck a third time with the beautiful-but-that's-it Jennifer Love Hewitt. Hewitt had a couple good lines and seemed okay at moments, but ultimately her butt-kicking abilities and corny approach at it were oftentimes downright embarrassing. Also, typically with such a co-star, the filmmakers couldn't pass up innuendo and the exploitation of Hewitt's figure, securing the film's PG-13 rating. While no nudity is shown, cleavage is in abundance, as well as a scene where a woman tries to bed Jimmy who doesn't want to, and we see her in her bra and panties as she tries to disrobe Jimmy. Some sexually-related jokes are made -- nothing graphic, but definitely unnecessary. There was plenty of action violence, but nothing particularly bloody. However, we see 2 instances where characters dehydrate drastically to the point of death and we see their ghastly shrivelled up bodies (highly reminiscent of The Mummy when the mummy sucks the life out of his victims. Finally, as in a lot of Chan films, Tuxedo also offers up the classic cookie cutter bad guy. He didn't entirely irritate me, but his cheesey "diabolical" scheme was the icing on the mediocre cake.

With that all said, it's just sad this film wasn't as good as it could have/should have been. It riddled itself with unnecessary material and was focused in the wrong direction. Let's just hope that if a Tuxedo 2 ever did come to pass that they'll correct the significant blunders of the first one. Entertaining, but never living up to it's greatest potential, Chan charms his way out of this one being a complete stinker, so I still give it 2.5 out of 5 stars.

Sex/Nudity: Plenty. Many comments/innuendo; Del wears several revealing outfits during the film. As Del and Steena are at a shooting gallery, the security guards focus the camera's on the girls' clothed butts. Cheryl tries to bed Jimmy who doesn't want to, and we see her in her bra and panties as she tries to disrobe Jimmy. We soon see Cheryl with just a towel around her waist and Del in a wet dress. Del comes on to Banning while working undercover and she touches his leg and suggestively touches her own cleavage.

Alcohol/Drugs: Some casual drinking at parties and such.

Blood/Gore: We see a dead body with an incision on its chest. Clark has some blood running down the side of his head. Del has a slightly bloody scrape on her knee. We see 2 instances where characters dehydrate drastically to the point of death and we see their ghastly shrivelled up bodies (highly reminiscent of The Mummy when the mummy sucks the life out of his victims.)

Violence: Classic Jackie Chan fight scenes, high speed driving, etc... (also see blood/gore) Disclaimer: All reviews are based solely on the opinions of the reviewer. Most reviews are rated on how the reviewer enjoyed the film overall, not exclusively on content. However, if the content really affects the reviewer's opinion and experience of the film, it will definitely affect the reviewer's overall rating.