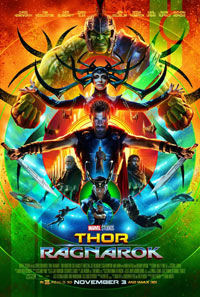 Imprisoned, the mighty Thor finds himself in a lethal gladiatorial contest against the Hulk, his former ally. Thor must fight for survival and race against time to prevent the all-powerful Hela from destroying his home and the Asgardian civilization. (from IMDB)

When Iron Man launched the Marvel Cinematic Universe 9 years ago, I don't think anyone really knew what we were in for. I, for one, never imagined I'd get so pumped for each new entry in the series either. But, so far, I can honestly say I have enjoyed every single Marvel film that's been part of the Avengers series. The latest addition is the third standalone Thor film, Thor: Ragnarok. Of the standalone films centered around their respective heroes, the Thor series has probably been the most heavily criticized, outside of The Incredible Hulk. Still, I found the first film, released in 2011, to be a strong introduction to the character. The sequel, Thor: The Dark World, released two years later, was met with mixed opinions, but I have grown to enjoy it more with each rewatching. Now, four more years later, we have Thor: Ragnarok, a film that serves as more of a sequel to 2015's Avengers: Age of Ultron than anything else (and it explains where Thor and Hulk were during the events of last year's Captain America: Civil War).

If you just watch the Thor movies by themselves--which, technically, you should include both Avengers films in that series for a more complete story, then Thor: Ragnarok offers a shockingly different tone in its storytelling. The two other Thor films are driven by drama with humorous aspects mixed in, but Ragnarok feels like a comedy first and foremost, which is rather odd in context. It's almost as if this film was trying to fit inside the Guardians of the Galaxy model more than what you'd expect from Thor. It works for entertainment value, but it feels out of place in the series of films about the character. Thor has always felt like a fish out of water, and The Dark World shelved that feeling, for the most part, grounding the character in his homeland of Asgard. Ragnarok tears Thor from his comfort zone, and it brings back the fish out of water humor that made the first film - and Avengers - so much fun.

I laughed A LOT during Thor: Ragnarok, but given the character and the events that occur during the film, if you stop to think about what's transpired too much, it might even make you mad. For example, the previous Thor films took us to Asgard, giving us a look at life in Thor's home world. Ragnarok quite literally wipes the slate clean (in similar ways that Iron Man 3 changed things for Tony). It's sobering--if not even just outright disappointing. Some characters that we came to love from the previous Thor films are either mysteriously altogether absent or brutally dismissed completely in a matter of seconds. It's surprising at the time, but it feels so cheap and careless in its execution (no pun intended). If you've ever seen the original animated Transformers film from 1986, you'll know exactly what I mean. The other odd thing is that Natalie Portman's Jane Foster is missing completely. I get that Portman doesn't want to do the films anymore, but it seems bizarre that Jane and Thor would just decide to break up (as explained in passing by a joke between Thor and Loki), especially with how much their relationship cost Thor and Asgard in The Dark World (Let's face it, she was pretty responsible for the death of Thor's mother). Even the after credits scene for that film brought the two back together. Thor seems almost unfazed by their "break-up," when their absence from each other clearly had such a big affect on them both in the previous entry. The events in this film kind of cheapen some things that happened before it. Lastly, with all of the new characters introduced in the film, Tessa Thompson's Valkyrie is one of the least likable, and yet she almost seems positioned to be a potential love interest for him. She has her moments, don't get me wrong, but I had trouble warming up to her in this film. It seems like a more obvious story progression would have been to bring back Jaimie Alexander's Sif and brought her along for the ride. Fans are already familiar with her far more likable support character.

Nitpicks and beefs aside, Ragnarok is truly a cinematic ride! While the edits and quick cuts can border on the frenetic, it adds to the insanity that Thor is experiencing for himself. Just seconds after learning he has an evil sister, named Hela, who's breaking out of banishment, he loses his trusty hammer. He then must rely on his deceptive adopted brother Loki to drive Hela out of Asgard. But to take the crazy to the next level, in his travels, Thor bumps into his fellow Avenger, Hulk, and it makes for some great action and hilarious interactions. This is also where the film continues events from Age of Ultron, when it comes to the characters of Thor and Banner. The villains are also great in this film, too. Cate Blanchett is excellent as Hela, and Jeff Goldblum has a surprisingly large part as the slimy ruler of a planet. You can tell they both had an abolute blast in their respective roles, too. Director Taika Waititi also enlists the aid of The LEGO Movie composer, Mark Mothersbaugh, to give the film a more 80's, electronic vibe. It actually adds to the silliness of the film, but it serves the tone Waititi is chasing after quite well.

Content-wise, the film is on par with the other Thor movies. There is a little bit of profanity, including a couple uses of the "S" word, some "Oh my G-d's," and a handful of uses of the words "h*ll" and "*ss." A lot of it also shows that Thor isn't the same guy he was back in 2011, with his time on Earth clearly affecting his personality (He even uses "S.O.B." in the opening scene as a play on the whole "Name - son of __" lineage reference). Sexual content is limited to a few comments, including a joke about a spaceship being used by the Grandmaster for "orgies and stuff" (and instead of letting the joke go by quickly, Banner repeats it emphatically in disgust). There is also quite a bit of violence, including a character getting impaled on a spear, several characters getting killed, with knives sticking out of their bodies, and battlefields being littered with dead soldiers. An action scene also includes quick cuts of soldiers being sliced up or gunned down. It's not too graphic, but it would be too much for younger viewers. Also, Valkyrie is unashamedly a drunk, and we see her drinking in many of her scenes--usually to excess. When we meet her, she's even visibly intoxicated. There's also another scene where Thor is seen drinking beer at someone's home.

Thor: Ragnarok is certainly a deviation from the other Thor films, but it's also a really fun time at the movies. If you liked the other Thor movies, just know that this is a drastically different experience. This movie also seems to rely very heavily on blue screen to provide backgrounds, and it's obvious on more than a few occasions. If you love the Guardians of the Galaxy films, though, Ragnarok is tailor-made just for you. I'd be hesitant to say it's the best Thor film, and it's definitely nowhere near the best of the Marvel series, but it's without a doubt a great deal of hulk-sized fun!

Sex/Nudity: Thor tries to describe how his hammer would make him fly to Korg, and when he describes about it "pulling me off," Korg reacts as if it were an explicit reference, but it's just played for laughs; When they realize a ship has no weapons, Valkyrie comments that the ship is used for Grandmaster's "orgies and stuff," to which Banner repeats it in surprise and disgust; We briefly see part of Hulk's bare butt and Thor reacts to seeing the front of Hulk naked (which we don't see); an interdimensional portal is called "the devil's anus," with some jokes being made about it.

Alcohol/Drugs: Odin is seen reclining at a play drinking from a goblet; When we first see Valkyrie, she stumbles out of her vehicle, drinking and then falls off the landing platform; Valkyrie drinks heavily throughout the film; Some people are shown drinking at a bar; Thor is given tea by a character and he says he doesn't drink that. The character then transforms it into beer and he drinks the whole stein before the character magically refills it.

Blood/Gore: A dragon head flies through a portal, sending an incredible amount of green blood/goo onto a nearby character. We then see the severed head slide across the floor; A character who is killed has blood on their face; A character's face and eye are bloodied after a battle; The Grandmaster touches a man with a stick that causes them to start to smoke and then melt into goo. The characters around them then comedically react to the goo pooling on the floor.

Violence: There's a great deal of action violence. Thor is seen chained up and we see a skeleton in his cell with him. Thor fights off monsters and skeletons; A main character dies and we see them dissipate into the air; An evil woman throws daggers to kill characters, and we see a few supporting characters get killed quickly with knives sticking out of them; Thor is equipped with a device that electrocutes him. We see another character get this device too; Hulk and Thor fight during a massive arena battle; We see a slowed-down, stylized flashback of Hela in battle; A character is impaled with a staff and killed; Hela steps over many dead bodies littering the ground; We see some hurt or dead characters outside an arena; Hela awakens the corpses of dead soldiers and a huge wolf. We see them fighting characters and killing many of them; Skurge wields machine guns and mows down opposing creatures; And lots of other action violence. Disclaimer: All reviews are based solely on the opinions of the reviewer. Most reviews are rated on how the reviewer enjoyed the film overall, not exclusively on content. However, if the content really affects the reviewer's opinion and experience of the film, it will definitely affect the reviewer's overall rating.