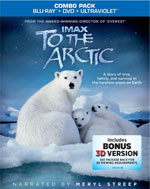 An extraordinary journey to the top of the world, the documentary adventure To The Arctic tells the ultimate tale of survival. Narrated by Oscar® winner Meryl Streep, the film takes audiences on a never-before-experienced journey into the lives of a mother polar bear and her twin seven-month-old cubs as they navigate the changing Arctic wilderness they call home. (from IMAX.com) 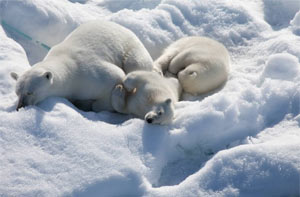 One of the neatest things about documentaries is when they take you to locations that the average person may never see in actuality in their lifetime. And when you take such documentaries and present them in such a grand fashion as in IMAX (and even IMAX 3D), it can be something truly special to behold. However, when the filmmakers end up turning what could be a fun and educational experience into a thinly veiled means of guilting their audience into donating to their cause, it can suck the joy and intrigue right out of it.

To The Arctic is needlessly one of those kinds of documentaries. It takes us to the frigid ice-covered tundra but tries stuffing various attributes of the icy climate into a brief 40 minutes. But this short running time actually ends up being mercifully short when you realize the intent of the project is to mainly make their viewer feel bad for existing and pitching in their "greenhouse gases" from "thousands of miles away." Everything they cover in this short time is from the perspective of how the ice is melting and how it's affecting the inhabitants of the land. Their scope is considerably grander than the running time allows and, instead, the movie feels like a long trailer for a bigger idea. For example, instead of making it about just polar bears or the Arctic's human residents, it tries to cover both of those topics plus caribou, the human researchers of caribou, walruses and the climate changes. Shortly after they introduce the first researchers to ever follow the 5-month migration of the caribou, they wrap up that storyline to move on to something else. And the climax of this documentary is merely a mother polar bear and her two cubs being hunted by a male polar bear...because, due to the ice melting, he has to eat polar bear cubs, of course. The film then ends, not surprisingly, with an urging of the audience to financially support those who dedicate their lives to undoing what the viewer's lifestyle is doing to this majestic land. 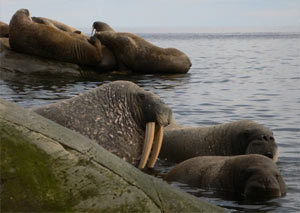 In the same way that a Christian film can be so ambitious in its desire to minister and get their message across that it can to go over way too heavy-handedly, the documentary filmmakers make a similar mistake here as well. In cases like these, it'd make more sense to let the subject or story speak for itself and just try to interest people in the Arctic by doing an incredible job of showing the beauty of the land and letting it inspire the viewers. But To The Arctic shows its hand immediately, talking about "greenhouse gases" and human living's negative effects on the Arctic within the film's first few minutes. The movie throws statistics out like how the ice has decreased by 25% in 30 years and theoretically could be gone in another 40. It also shows each Arctic animal from that viewpoint, not of their existence but of their survival. It just all plays out way, way too preachy and skewed.

To add insult to injury, the film's music is over the top. At times, it's just plain goofy or too whimsical; other times its just too melodramatic. Even the songs by Paul McCartney are more irritating than complimentary of the documentary. Meryl Streep is the main narrator, and her voice is enjoyable to listen to, but when guest narrators -- like an Arctic photographer or a native of the land -- take over, they're either tough to understand or too corny to listen to. I just found myself wishing Streep would return, but she was gone for often long stretches of time.

The content is indeed G-rated, but there's one particular scene that gets a little rough for the squeamish. After a polar bear kills an animal for her cubs' meal (we don't see the killing), we see them picking at a bloody carcass from a distance. But then we see the food is all gone and the ice is splattered with blood, along with the cubs having blood from their meal on their faces and fur. It's a bit gross considering this is rated G, but they don't focus on it very much or for very long.

It's a shame that To The Arctic is so heavy-handed in its intent to give the audience a guilt trip and hopefully use that guilt to move them to donate to its cause. The visuals for the movie are often stunning, but the execution is just very poorly done. Save your time and money by avoiding this mess.


To The Arctic is available on DVD and in a Blu-Ray/DVD combo pack that manages to squeeze the Blu-Ray 3D onto the same disc as the 2D. As mentioned above, the visuals are truly stunning. However, there are a couple instances where the footage isn't quite up to par with IMAX standards, so the filmmakers float the footage in a separate box over some Arctic landscape footage. Sadly, this isn't some pop-up Blu-Ray menu or feature; this is actually part of the movie. Otherwise, the main film's images are incredible!
Along with the 40-minute feature film are an array of extras on the Blu-Ray disc that may actually be a bit more interesting than the movie itself...except for the fact that all of these extras are basically 2 to 3 minute commercials for the film. "Behind the Scenes: To The Arctic with Meryl Streep" (2:22) features the film's narrator talking about the film and driving home environmental passion behind the documentary. Most of the rest of them--"Short Feature: Pristine" (2:00), "Behind the Scenes: Life Under Water" (3:24), "Behind the Scenes: The Challenges of Filming in the Arctic" (3:15), "Behind the Scenes" A Polar Bear Family" (3:15)--are given the commercial format with the same intro for each one before showing some standard definition making-of footage after it. The more unique one, however, is "Short Feature: Welcome To The Arctic" (3:06), which shows the crew on-site as they're filming the polar bears in their daily routines. It's only 3 minutes in length, and about a third of it turns out to be a guy retrieving his digital camera and clicking through to see if he got any photos (which we only ever see one of), but the end proves triumphant for them. To wrap it all up, there's the official Trailer for the film. - John DiBiase, (reviewed: 3/25/13)

Blood/Gore: We see a polar bear eating a bloody carcass from a distance; Later, we see cubs and a polar bear eating fresh meat and we then see the blood-stained ice around them. It then cuts to the aftermath of ALL of the carcass having been eaten and we see blood splattered across the ice and some on the cubs' fur (Mind you, this isn't staged, so this is real animal blood)

Violence: There's talk of animals eating each other and we see two different scenes where polar bears are eating dead animals, but the climax of the film shows a mother polar bear and her two cubs fleeing a male polar bear. But the male does not get them. Disclaimer: All reviews are based solely on the opinions of the reviewer. Most reviews are rated on how the reviewer enjoyed the film overall, not exclusively on content. However, if the content really affects the reviewer's opinion and experience of the film, it will definitely affect the reviewer's overall rating.