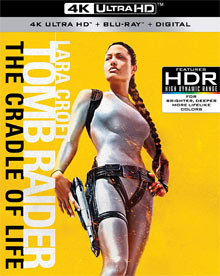 Facing her greatest challenges yet, the intrepid tomb raider Lara Croft (Angelina Jolie) travels the world on a spectacular adventure that takes her to such exotic places as Hong Kong, Kenya, Tanzania, Greece, and the Great Wall of China. Demonstrating her physical prowess and revealing her courage as never before, Lara proves that she will stop at nothing in her search for an infamous site known as "The Cradle of Life"... especially when it means she could save the world from the most unspeakable evil ever known.

Believe it or not, but I voluntarily chose to see the sequel to the mostly terrible 2001 original, Lara Croft: Tomb Raider. The films are based on a popular role playing adventure video game about a shapely treasure hunter named Lara Croft. While the story could work well as a movie, given the popularity and success of the Indiana Jones adventure films, it only works sometimes. An engaging plot and likable characters are replaced with action-for-action's-sake sequences and cardboard representations of where a character should be. While Indiana Jones had the clever humor, a genuinely likable hero, truly sinister yet often sophisticated central villains, and a supporting cast that only complemented Harrison Ford's character, Tomb Raider lacks in each of these areas. And while Angelina Jolie is often very good in the Croft role, and adds a fun spin to her character, she doesn't seem to be able to carry the film on her own. This is the feeling that came across again the second time around. While James Bond often teams up with a beautiful and known co-star in his films, Jolie's Croft is often accompanied by slobbering nincompoops who just leave a drool path behind them as they follow Croft around like little lost puppies. So when one of those characters gets bumped off one way or another, who really cares? But shouldn't we? So with Jolie as the star of every scene, doesn't it work as a one-woman show? Oftentimes no, but sometimes yes. 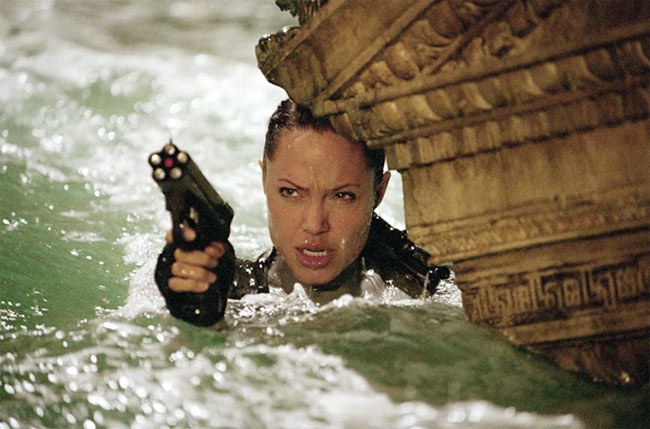 While it may sound like I'm picking on the idea of a "girl-power" heroine who can rock the socks off any man who comes toe-to-toe with her, that's hardly the case here. My problem is that no other characters really stand out. It's Croft in a world of lifesize cardboard stand-up representations of characters. Even though it probably would steal Jolie's thunder to be teamed with a famous actor, even a somewhat known character actor would suffice here (or at least a character with a coherent accent and actual brains). "So tell us, John, what did you like about this film?" Well folks, the fact is I like movies. And usually I can salvage a miss of a flick if the story and lead actors are interesting and watchable enough. While there's nothing in The Cradle of Life to give you the unsettled feeling of must-seeing the film again before it appropriately exits the multiplexes, there are enough entertaining moments to keep your eyes busy if you'll let yourself enjoy it. My favorite moment, actually, took place towards the climax of the film that involved an encounter with some ferocious and ultimately disturbing creatures (the "hunt" in it should remind some of the velociraptor attack in the field in The Lost World). The visuals were often pretty cool but we all know that isn't enough to save an ailing film (anyone remember 1998's Godzilla?? -- If so, I'm sorry to hear that).

Language is minimal while the sensuality is kept under wraps pretty well and the violence includes some brief bloody cuts and marks as well as a brief-but-gruesome glimpse of a character melting in acid. Also, violence is heavy, but not too bad for a PG-13 action film. As far as the plot goes, The Cradle of Life was decent, yet, when analyzed, borderline blasphemous. The film proposes that life came to be from Pandora's Box -- Greek mythology -- and evolved. While we know it's silly but probably okay if used in a story for story's sake, and not meant to be taken literally, it's a goofy premise and one that contradicts what Bible-believers believe. 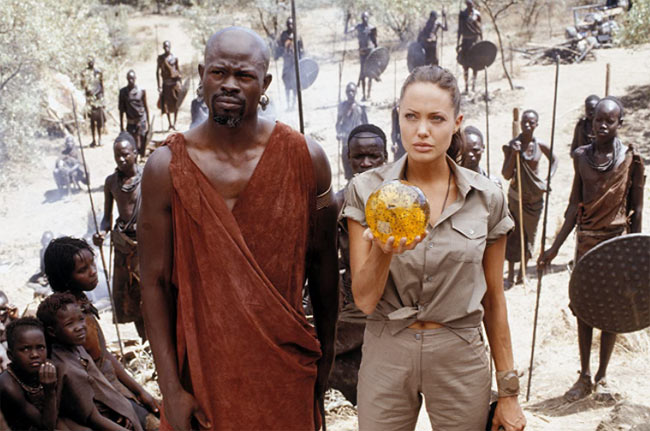 Overall, I thought the movie was alright but a large step above the first film. Still, it could have been a whole lot better. It's decent rainy day enjoyment if you don't expect much and are in the mood for improbable, and often lifeless, action/adventure.


For the 20th Anniversary of the 2001 Lara Croft: Tomb Raider, both that film and its sequel, The Cradle of Life have been remastered in 4K UHD for a new release. (It's unclear, however, if the 2018 4K releases of both movies are the same as these or not.) The 4K pack comes with one disc each for the two films, with the only special features being feature commentary from the director. The 4K UHD 2-disc set does come with digital copies, however, which will likely contain the bonus features that are also included in the separate 20th Anniversary Blu-Ray release of 2001's Lara Croft: Tomb Raider. 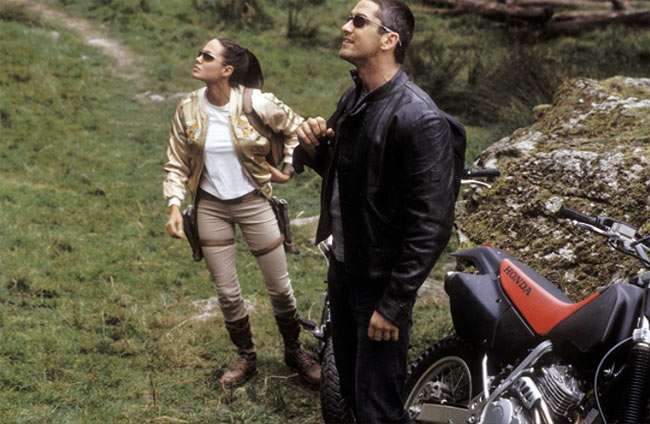 Lara Croft Tomb Raider: The Cradle of Life in 4K UHD - While it's hardly a good movie by any means, I remember Lara Croft Tomb Raider: The Cradle of Life being an improvement on the 2001 film, but sadly, there's still a lot of room for significant improvement. This time around, the directing was handled by Jan De Bont, who is responsible for bringing cult classics Speed and Twister to the big screen (but also 1999's widely criticized The Haunting). Unfortunately, you'd never guess by watching The Cradle of Life. All of the characters have definitely been improved upon, and even the film's musical score is a major improvement (but still lacking). The special effects are somewhat better, too, but the movie seems to have been inspired too much by spectacle-over-substance movies like The Haunting and The Mummy Returns and not enough by Raiders of the Lost Ark (although there are definitely some noticeable influences here). Jolie's turn as Croft this time is much improved as well, while Gerard Butler is a surprising addition to the cast. I noticed I completely bashed Butler's presence in the movie when I saw it in 2003 (and it's funny that he later became a leading man star), but his presence didn't bug me so much in this more recent rewatch. Butler's character Terry is pretty flat, but he's still immensely more developed than Daniel Craig's Alex West was in the first film (though that's not saying much). The script is also leaps and bounds better this time around - although, again, that's not saying much. I did find myself getting a little bored watching The Cradle of Life, at times, because the story just isn't all that engaging, but as a whole, it's a decent action/adventure film. The action scenes are better this time, too (and its central villain), even if things still just feel so much "cheaper" and more amateur than they should be.

So how is the movie in 4K UHD? Quite lovely, actually. Even more so than the 2001 film, the picture is crisp and colorful and revitalized in this format. I definitely think these new transfers do a lot for these films... but only as much as it possibly can, since they're just average-at-best action movies. If you're already of fan of the Jolie-helmed Tomb Raider movies and have 4K viewing capabilities, this collection is worth it. Otherwise, definitely check out the 2018 reboot instead.

Sex/Nudity: Besides seeing Lara in a revealing bikini, there's a sensual scene where Lara comes on to Terry. In that scene, we see her with just a low-rise dress of some kind wrapped around her. He comes up to her shirtless and they kiss passionately. She climbs on top of him and caresses him briefly before handcuffing him to the bed (non-sexually); Her bodysuit in the opening scenes shows the outline of nipples on it. It's unclear if that's from her or it's part of the bodysuit's design.

Alcohol/Drugs: Some people have wine and champagne.

Blood/Gore: Lara cuts her arm to make blood spill into the ocean to attract a shark (we briefly see the bloody cut and some red in the water); A man is poisoned with a form of the ebola virus and he spits up a considerable amount of blood into a handkerchief and down his chin; Lara throws bamboo poles at a man that slice either side of his shirt. He yells in pain and we briefly see his torn shirt and blood on his side where the shirt tore; We see a slightly bloody cut on a man's leg after she slices him with a knife; Lara has some blood on her shirt; Lara's head is pressed against some broken glass on a table and we briefly see some blood from her head on the table; We see some blood on rocks; We see a character in a pool of acid and briefly see them struggle as their skin melts off (it's very digital); Lara has some blood on her hands, arms, and forehead.

Violence: A heavy amount of shooting, punching, kicking, stabbing, some people die through the movie, etc. A man's throat is cut from behind but the camera cuts away as he is killed; A temple collapses, killing some bad guys; Lara shoots a man, killing him; A man falls into a pool of black acid. We then see his head, torso and arm pop out as he screams with skin and muscle visible before he sinks fully under the acid. Disclaimer: All reviews are based solely on the opinions of the reviewer. Most reviews are rated on how the reviewer enjoyed the film overall, not exclusively on content. However, if the content really affects the reviewer's opinion and experience of the film, it will definitely affect the reviewer's overall rating.