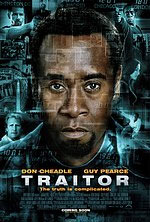 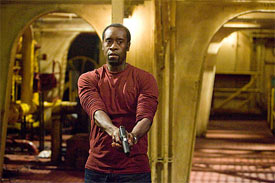 When straight arrow FBI agent Roy Clayton (Guy Pearce) heads up the investigation into a dangerous international conspiracy, all clues seem to lead back to former U.S. Special Operations officer, Samir Horn (Don Cheadle). A mysterious figure with a web of connections to terrorist organizations, Horn has a knack for emerging on the scene just as a major operation goes down. The inter-agency task force looking into the case meets with Carter (Jeff Daniels), a veteran CIA contractor who seemingly has his own agenda and Max Archer (Neal McDonough), a fellow FBI agent. The task force links Horn to a prison break in Yemen, a bombing in Nice and a raid in London, but a tangle of contradictory evidence emerges, forcing Clayton to question whether his quarry is a disaffected former military operative -- or something far more complicated. Obsessed with discovering the truth, Clayton tracks Horn across the globe as the elusive ex-soldier burrows deeper and deeper into a world of shadows and intrigue.

It's rare for me ever to go into seeing a movie with little actual knowledge about it. But after not hearing too much about Traitor until maybe a month before its release, I became interested mostly based on the genre of the film and its cast. With Don Cheadle leading supporting actors like Guy Pearce and Jeff Daniels, I got the impression Traitor was just a different spin on the whole fugitive-on-the-run thriller and decided to leave my knowledge of it at that. And while Traitor does kind of have that element to it, I was completely unaware of one of the crucial main plot themes. 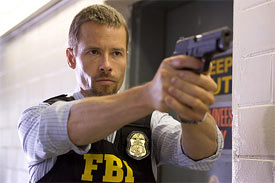 Traitor opens in 1978 in Sudan. We see a young boy named Samir with his father who then is killed as a result of a terrorist act. After the very brief flashback, we're in present day Yemen where a grown up Samir - now played by Don Cheadle - is meeting with some Muslim terrorists to deal them some explosives. Soon after, we're introduced to two FBI agents, played by Guy Pearce and Neal McDonough, who are working on fighting the war on terrorism. And before long, it's revealed that Samir is a deeply religious Muslim who gets caught up in some serious business when he begins fraternizing with an Islamic terrorist group and ultimately begins aiding them in their cause.

Elements of Traitor get that sort of Fugitive vibe, but without the snappy dialog or charisma from Tommy Lee Jones as the US Marshal hunting down Richard Kimble. Here, the chief hound dog role is split into partner roles, with a bit more emphasis placed on Guy Pearce's FBI agent, Roy Clayton. We slowly learn bits and pieces about Clayton's character, but mostly his religious background as the son of a Baptist minister which helps him relate to Samir's Islamic passion. Neal McDonough turns in his usual abrasive jerk performance as Clayton's partner Max Archer, which makes it incredibly hard to like any moment he's on screen. Clayton is even unevenly painted enough that, coupled with Samir's "where does he stand?" status in the film, it's a bit difficult to figure out who to be rooting for. There aren't really any solidly defined or even likeable heroes in the film, so it takes some time to get drawn into the story. Ultimately, because we sort of hold out hope that both Clayton and Samir are fighting for our kind of values somehow, the investment in the characters doesn't completely go unwarranted. But I found the twists and turns of the plot to be what kept things most interesting, especially as we try to figure out exactly whose side Samir Horn is on.

I felt a bit uncomfortable at first with the way the story begins because it almost seems like we're supposed to be supporting an Islamic religious fanatic with a terrorist mindset and goal. Thankfully, the story does begin to clear up around the midway point, but most of the film takes us deep into the heart of a terrorist organization and their duty to Islam while they plan a terrorist attack on the United States. The end result brings some clarity, while the theme actually does not strictly apply to the Muslim belief system. By establishing Clayton as having a background in Christianity (with his father and his father's father both having been Baptist ministers), valid points are made about the extremists on both ends (Specifically a great point made by Clayton about people who burn crosses calling themselves Christians as well as those who put those fires out. And incidents like Christians who blow up abortion clinics also come to my mind). Bottomline is, Traitor raises some interesting questions and topics for discussion after viewing the film. Still, I felt like there could have been more said and explained about Roy Clayton's character - especially to help draw more audiences into it his storyline. Director/writer Jeffrey Nachmanoff does little to make us like either Clayton or Archer right off the bat, so it takes most of the film to build up any real respect or appreciation for their characters (Although Archer's mostly a complete loss). And it's tough to show too much dimension to Samir without losing the intended mystique about his character, but that does hurt the story a little bit. 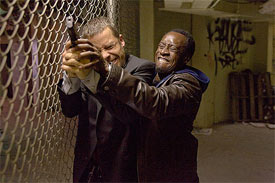 Content is mixed, as can be expected for a film of this genre. But with the MPAA slapping the film with "for intense violent sequences, thematic material and brief language," I found it misleading to claim "brief language." Oftentimes, when at least one "f" word is used in a movie, the rating will state "brief strong language," however, this film does not and yet McDonough's Archer tosses the "f" word at Cheadle's Samir pretty early on in the film, and then a handful of profanity is sprinkled throughout. It was appreciated for the blasphemy to be near nonexistent (it's limited to Samir saying "Oh, G-d" out of frustration in one moment) for a film with such emphasis on religious matters (usually that doesn't even seem to matter in most cases), but there's still a fair amount of other language included. Violence is rarely very graphic, but we do see a man get beat up a bit and a couple small bullet holes in victims' clothing. Finally, the terrorist theme is a bit unnerving, especially when it centers around the idea of a Muslim terrorist group having seemingly innocent civilians planted throughout the United States who all are just waiting for the day when they'll be instructed to give up their lives to "send a message from God." This theme produces several pretty tense moments as well.

More about religious and moral matters and how our country is trying to handle this war on terror than anything else, Traitor certainly isn't for everyone as it focuses most of its attention on terrorism and how the Islamic groups play a significant and disturbing part in it. It's more of a discussion starter than a question-answering film, so those interested in these kinds of current events and politics may be most interested in this film's story. As entertainment, Traitor succeeds in being an engaging story, particularly through Don Cheadle and Guy Pearce's acting talents, but those not interested in these kinds of thrillers/dramas with some heavy themes need not apply.

Sex/Nudity: None. We briefly see some women in bikinis on a beach, but the camera doesn't focus on them.

Alcohol/Drugs: While a few muslims sit around a table at dinner, their leader sips some wine and encourages others to partake, even though it is against their beliefs and do it just to "blend in."

Blood/Gore: A young boy has a bloody nose after an explosion; Many times when people are shot throughout the film, we see small bullet holes in their clothing, seen only briefly; Samir gets a cut on his arm (through his robe) during a fight and we see some blood on his sleeve during and afterwards. We also see him with some blood coming from his mouth and a little on his face; We see some people dead, lying on the ground after an explosion and some shooting; We hear that a teen was killed and we see a photograph of him dead with some scrapes on his face; We see a small bloody bullet hole on a man's back after he's been shot and a small pool of blood around his head; A man has some scrapes and a huge bandage on the side of his face after surviving an explosion; A man walks into a room and shoots several people. We briefly see bullet holes in their clothes. Another man is shot up via rifle fire (seen quickly), and another is shot a couple times, but we don't really see any blood

Violence: We see a car explode, killing the person inside; A room is raided and many of its inhabitants are shot and killed; A man is chained to a pipe and is struck by another man; There is a knife fight where Samir is cut on the arm and then ganged up on and kicked while down before the fight is broken up; A suicide bomber's car doesn't explode with him in it, so he runs out and the car explodes killing people around him (and he is only injured); When a plan is blown, a few terrorists throw the person who blew it over a bridge, possibly to be hit by a train (we don't see it, just hear a train and hear them scream); Two men fight over a gun, one holds the other at gunpoint before hitting him with it and running away; Two men struggle, one runs away and another person then shoots that man in the back, then walks up to the body and shoots him at close range in the back again; Part of a building explodes; We see a vehicle explode, killing people inside it; A man is gunned down while standing at a desk; A person shoots several other people. Then a room is raided and two people are shot down Disclaimer: All reviews are based solely on the opinions of the reviewer. Most reviews are rated on how the reviewer enjoyed the film overall, not exclusively on content. However, if the content really affects the reviewer's opinion and experience of the film, it will definitely affect the reviewer's overall rating.