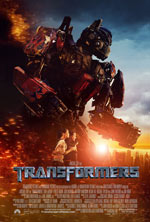 For centuries, two races of robotic aliens -- the Autobots and the Decepticons -- have waged a war, with the fate of the universe at stake. When the battle comes to Earth, all that stands between the evil Decepticons and ultimate power is a clue held by young Sam Witwicky (Shia LaBeouf). An average teenager, Sam is consumed with everyday worries about school, friends, cars and girls. Unaware that he alone is mankind's last chance for survival, Sam and his friend Mikaela (Megan Fox) find themselves in a tug of war between the Autobots and Decepticons. With the world hanging in the balance, Sam comes to realize the true meaning behind the Witwicky family motto - "No sacrifice, no victory!" (from MovieWeb.com)

It wasn't hard to scoff at the idea of a live action Transformers movie when it was announced a few years ago. And when a cast consisting of Jon Voight, Bernie Mac, and Anthony Anderson was mentioned, all hope seemed lost for anything good to come from it. While director Michael Bay has become a reliable name in creating memorable action films, those same films are often farfetched, overblown, and over-the-top - something that could very well work for making a Transformers film for an older audience. So when the Transformers teaser trailer hit theaters last year, it seemed like more of a joke than anything for a film based on an early 80's toy line that turned into a highly successful cartoon series. Given that I am a child of the 80's, I was indeed one of the fans of this particular franchise, and I initially had little hope of this film being any good. The news that the VW Bug character Bumblebee (get it?) was changed to a Camaro, didn't help either, and my expectations continued to dwindle. But then the full trailer debuted...

Watching the effects of a real helicopter and a real car quickly shift and transform into a larger-than-life robot was something this late-twenties 80's baby was floored by. Something about watching your childhood heroes come to life on the big screen reaches down to that little kid and becomes a real treat for them. Michael Bay understood this and set out to make a Transformers film for the original fans -- now all grown up (well, at least physically). But herein lies the biggest problem the film has. Where it may have some corny dialog or goofy moments, the film's greatest hangup is the adult content. From the beginning, Transformers has an edgy tone, and language doesn't seem to be something Bay wanted to tone down to make it more family friendly. Considering parents will bring kids to this, I found it disheartening that there had to be references to porn magazines under Sam's bed and a masturbation joke made by Sam's mother. It's stuff like that that not only seemed out of place, but it dumbed down the scale of the movie to almost a spoof status at times. Thankfully, these moments were brief and ultimately unimportant in the grand scheme of the movie. However, the language and sexual humor is bad enough to limit viewers, making it unsuitable for younger kids.

Where Transformers succeeds greatest is in its visuals and size. I admit I wouldn't expect every movie fan to "get" this movie. I'm admittedly a childhood fan, so a lot of the excitement that is born out of the events in the story tickle the fancy of those who appreciate the Transformers lore of the 80's. For example, voice actor Peter Cullen returns as Autobot leader Optimus Prime - the magnificent, large tractor trailer who is a born hero and protector. Cullen's voice is irreplaceable, and the thought of anyone else voicing Prime is unimaginable. In the 1986 animated feature film, a showdown between Decepticon leader Megatron and the Autobot leader results in Prime's death, something that would ultimately damage the franchise. So seeing Optimus back again - more grandiose and real than ever before, complete with Cullen's deep and fatherly voice - is just such a joy for fans. The new film also borrows a few memorable lines, not only from the TV series, but also from the film - enough to give any big kid a few chills to hear uttered by Cullen once again. The Matrix's Hugo Weaving steps in to voice the evil Megatron and does a fair job, although his voice is nearly unrecognizable here. Sadly, the character doesn't seem to get nearly enough screentime either, and doesn't really make an appearance in the movie until the final quarter of the film. The other voice actors are adequate although not nearly as monumental. But the quality of the animation of these robots is so fantastic. I've always wondered why special effects artists can't make everything look as good as those dinosaurs in the Jurassic Park films, and it seems whoever was in charge of bringing these robots to life spared little expense when it came to detail and tangibility. In most effects-laden films, flaws are easy to detect, and I had a real hard time finding any here. If anything, the action cuts and moves so fast, and the robots are so detailed, that it's often tough to tell what exactly is happening when the metal clashes and the action ensues. 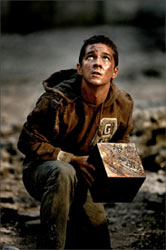 The comedy element is a bit mixed. There are plenty of laughs in the movie, but some fall flat while others more well-written. In fact, the story itself is a pretty good concept for a franchise built around some really cool toys. And the actors assembled do a fine job making what's happening around them believable. Shia Lebouf is one of the better young actors around today who makes embodying an average teenager seem especially easy (despite being past those years in real life). But Lebouf is charismatic and brings a lot to a role. The action, on the other hand, while the story takes its time to really get underway, is some of the more intense that I've seen in recent years. By the time Transformers rolls into its climax, the action, visuals, and resultant destruction from the warring robots is incredible. Sure it may just play to the little Transformers fan inside, but the action is exciting and fast-paced. It's safe to say, I've never seen anything quite like this movie before.

In the end, the latest incarnation of the Transformers franchise is an incredible achievement in theatrical entertainment. It excels visually and as a contemporary story serves as one of the most exciting films this year, however, it doesn't squeak by without its share of unnecessarily crude humor and adult language. Transformers is strictly for older audiences and parents will need to take this into consideration. This ain't quite your alien robot cartoon show from the 80's. Michael Bay has successfully updated the franchise and revived it for a new generation, as well as the old. If this film spawns any sequels, let's hope it retains the awe-inspiring visuals of this project, but brings more of a family-friendly element to it. Transformers is a spectacle, but while I'd love to heap further praise on, its occasionally violent and crude content hurts it from becoming an instant classic.

Sex/Nudity: Mikaela is shown often revealing cleavage or in other attire that accentuates her curves; Sam's ebay screen name of "LadiesMan217" is referenced several times; When Sam first sees Bumblebee as a robot, he leaves a message on his phone and makes reference to porn magazines under his bed that aren't his, and then admits they are; Mikaela and Sam search his room for something and when she reaches for a big black box, Sam rushes over to it and says it's personal and tries to hide it under his mattress; While in his room, Sam tries to hide the robots (who are outside) from his parents, but they knock on his door repeatedly, asking him to open up. When he finally does, his mom says she thought he might be masturbating, to which she says it's okay if he was; Mikaela makes Simmons strip down to his boxers and handcuffs him to a pole as punishment; Ratchett comments that he detects the pheromone levels of Sam that he wants to "mate with the female;" We see Sam and Mikaela laying on top of Bumblebee's hood (in car form) and kissing; some other minor innuendo is made during the movie

Alcohol/Drugs: Sam gives his dog (who is wearing a cast on his leg) painkillers and calls him a crack addict; a cop interrogates Sam and thinks the dog's painkillers are his own drugs and acts crazy, prompting Sam to ask the cop if he is on drugs; Sam's mom comments that she may have had a little too much wine to drink

Blood/Gore: Just some scrapes and cuts on Sam's face, and some of the soldier's faces

Violence: Lots! When robots attack a miliary base, most of the soldiers are wiped out; We see a scorpion-like robot quickly impale a man and throw him about (not especially graphic); We see some wounded soldiers after an attack; An immense amount of buildings being damaged, cars exploding and being crashed, people being thrown or killed (non-graphically); Some robots are killed, with one being pulled apart, another lives but loses its legs, others die through other means; After falling from a building onto a street, Megatron sees a human run by and flicks it away; etc Disclaimer: All reviews are based solely on the opinions of the reviewer. Most reviews are rated on how the reviewer enjoyed the film overall, not exclusively on content. However, if the content really affects the reviewer's opinion and experience of the film, it will definitely affect the reviewer's overall rating.