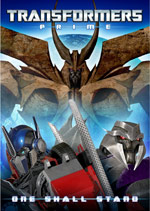 Transformers Prime: One Shall Stand 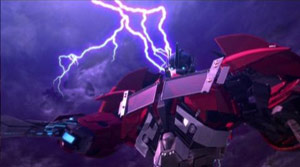 With UNICRON's awakening, extreme measures needed to be taken. An unlikely alliance formed between AUTOBOTS and DECEPTICONS to defeat UNICRON, a foe who could spell the end of the Earth. The action unfolds as the AUTOBOTS battle alongside MEGATRON against the evil UNICRON. Enemies became allies, allies became confidantes, and with the Matrix of Leadership, the planet Earth was saved... Though at immeasurable personal cost... (from Click Communications)

In 2010, following the success of Michael Bay's live action Transformers feature films, an all-new computer animated TV series was launched for a new generation of Transformers fans. Titled Transformers Prime, the new series continues the adventures of the beloved characters that bear similar models to their feature film versions while introducing additional characters from the Transformers lore and incorporating new human characters into the mix as well.

Although you can purchase every episode in Transformers Prime, Season One, on DVD or Blu-Ray right now, popular TV-to-DVD studio Shout! Factory has just released a unique DVD that unites seven Transformers Prime episodes into on seamless feature-length film. The last time I had seen something like this done, it was when the pilot episodes from Star Wars: Clone Wars were joined to create a feature film for the big screen. That film felt a lot like several episodes sewn together into one and Transformers Prime: One Shall Stand has a bit of that feeling as well. One giveaway for this is the start-and-end feel to several parts of the story. Because it's seven episodes, there are seven chapters that often have a distinct start feel that builds up to a climax, which then gives way to another start. However, Shout Factory, and the directors of the show itself, really have done pretty well at crafting a story that pulls you in and takes you along for a wild ride. There's a dramatic tone that the original 1980s cartoon lacked, and the pacing is a little bit slower as well. On the other hand, there is a great deal more importance placed on just a few main characters here, while the original series had a wider selection of characters at the forefront, giving less time to develop each of them. Because there are less main characters here, this show can and does focus on developing each character a little more than the 80s show had. 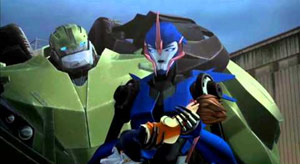 Granted, I have not seen any other Transformers Prime series episodes prior to this DVD "compilation" of sorts, but tonally, it seems as though this show is darker and more violent than previous Transformers cartoons. For example, in the "Generation One" series (the very first cartoon), prior to the violent animated film that separated Generation One and Two (a film which killed off the beloved Optimus Prime and many other main characters), no robots would really die in the television show. In Transformers Prime -- at least in this collection of seven shows -- the Decepticons have an array of expendable minions that we see the Autobots thrash time and time again throughout the film, killing many of these nameless robots. It does up the stakes a bit, but it also makes this show more violent in nature and less friendly for the littler kids.

The One Shall Stand story opens with a mano a mano battle between Optimus Prime and Megatron that borrows the iconic "One shall stand and one shall fall" line that was first used in the encounter between the two of them in the 1980s animated film and again in the 2007 live action Transformers film. This begins to set up a three-part arc where Unicron rises (also a character introduced in the 80s film) with the remaining six episodes being two separate three-part arcs that conclude Season One and begin Season Two -- which is still airing new episodes this summer. As a standalone story, the One Shall Stand DVD works really well, regardless of some noticeable chapters. Fans of G1 will appreciate the lore references, despite many liberties taken to update them, while new, younger fans will probably love the action and suspense. Again, while I haven't seen other episodes, the stories here are pretty smartly written and presented-- something that can't be said for Michael Bay's stories. In fact, One Shall Stand is far better storytelling than either three of Bay's efforts to date and would have made a great story for one of his films. 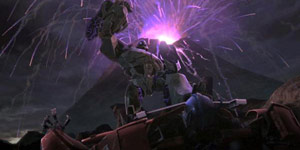 I grew up with the G1 cartoon which majored in the robots as the main characters and minored in human characters. My older brother and I liked Spike and His dad Sparkplug when we were kids, but we didn't care that much about them. It was Optimus, Megatron, Bumblebee (who, sadly doesn't talk in this interpretation of his character, to match Bay's film version), Ratchet, Megatron, Starscream, Soundwave (who doesn't talk here either?! He had the coolest voice!) who we gravitated towards; it wasn't the humans. Still, Transformers Prime includes a new set of human characters: Jack, Raphael, Miko, Jack's mom, and government agent Fowler. They don't really seem to do a whole lot other than to fulfill the need for humans to be included in the story, but since they're not really the main focus in this series -- as opposed to Bay's films -- that's a very good thing. This series feels a lot more like we've come to know Transformers to be than Bay's did.

Overall, I enjoyed One Shall Stand a lot more than I expected to. It even did its job and has me interested in this show. It's well animated, action-packed, and pretty smartly told (I also liked how the Cybertron scenes were reminiscent of the War for Cybertron video game from a couple years ago). The mostly seamless transition of episodes (it's really only noticeable to figure out where episodes begin and end if you're looking for that) make One Shall Stand feel well enough like its own movie and serves, too, as a good introduction to the show. And since it's a bridge between he show's first two seasons, it's a truly unique release. However, if you already own Season One on DVD or Blu-Ray and plan to get Season Two when it releases, One Shall Stand is an unnecessary investment. If you're only interested in one really cool Transformers story that spans almost two and a half hours and centers on Optimus Prime and Megatron, then Transformers Prime: One Shall Stand exists just for you.


A look at One Shall Stand with Jeff Kline, Duane Capizzi and Steven Melching (12:12) - This is a great, but short, round table chat with Executive Producer Jeff Kline, Writer Steven Melching and Supervising Producer/Writer Duane Capizzi supervising. Here, the crew talk about what it was like to create this story, what that process involved, and about creating and planning the whole series itself. It's interesting to learn their thought processes and how different the production of this show is from most animated cartoon shows.