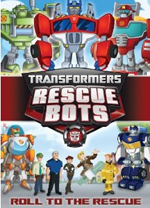 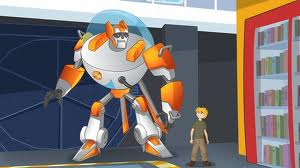 Griffin Rock seems like just another chunk of land floating off the coast of Maine. But if you look a little closer, you just might find more than meets the eye! Meet the RESCUE BOTS - CHASE, HEATWAVE, BLADES and BOULDER! Stationed undercover, they're given the task of protecting and learning about mankind by teaming up with a family of first responders, including a police chief, firefighter, helicopter pilot and engineer. With help from Cody, the family's youngest, the RESCUE BOTS help keep people safe, and along the way they learn what it really means to be a hero! (from Click Communications)

Being someone who grew up on the "Generation 1" Transformers cartoon show, it's a little heartwarming to see the cartoons and toys continuing for the next couple generations of little cartoon-watchers. Being a dad now myself of a 2-year-old boy, a series like Transformers: Rescue Bots seems to be the perfect starter cartoon for young guns who are growing up and getting into things like vehicles and robots. With the interest of hopefully getting my little guy introduced into the wonderful world of Transformers, I decided to check out the new DVD release, Transformers Rescue Bots: Roll to the Rescue, a six-episode compilation of stories from the Rescue Bots TV show. 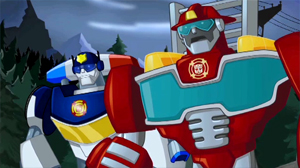 Roll To The Rescue is my introduction to this newer series. In fact, until the DVD's announcement, I didn't even know this 2011 series existed (coincidentally, I'd bought the Optimus Prime Rescue Bots toy truck for my son about a year ago not knowing it was for a kids' TV series). In short, the concept of Rescue Bots is about a team of four new Autobots that Optimus Prime has designated to care for the well-being of the humans in a small town called Griffin Rock. Posing as "robots in diguise" as large robots fabricated by man for their town--and not the living alien robots that they are--these four Rescue Bots are manned by humans who are all part of the same heroic family, lead by their father, a police chief. The youngest son, Cody, is the first of the kids to learn that the robots are more than meets the eye and, before long, the family and robots are learning what it really means to work together as a team.

The show's animation style is simplified and colorful in a way that looks perfectly formatted for younger viewers, however, the occasionally bickering children, coupled with life threatening situations make the show seem a little more mature than the toddler-centric toys you may find in the store. The pilot, which sets up the story well (and has a special appearance by Optimus Prime), features animatronic museum dinosaurs that come to life and must be stopped by the Rescue Bots team. The second episode involves stopping a volcano that begins spewing lava all over Griffin Rock. Another episode seems to be a strange nod to Alfred Hitchcock's The Birds by featuring, of all things, flying lobsters (dubbed "flobsters"). Some of it is pretty silly, and in ways does feel perfectly targeted for younger viewers, but some of it also feels strangely intense. One of those such moments finds two of the children trapped in the Autobot helicopter Blades who, because of a lightning storm, can't fly and so all three of them are trapped with fire starting to envelop them. The whole scene gets pretty intense before they're inevitably rescued. 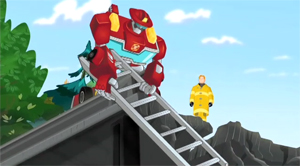 Because the show isn't aimed at toddlers, but still little children, the tone of the episodes and the voice acting aren't as goofy as you might expect from other shows (like Chuck The Truck or Bob The Builder). The classic transforming sound from the original cartoon is used when the robots go from vehicle to robot form and back, which is a nice touch, and there are subtle references to things that only parents would understand. One such moment is the aforementioned The Birds reference, as well as the fact that the town's scientist goes by the name "Doc" and looks like an African American version of Doc Brown from Back To The Future, and even drives a car that looks remarkably like the DeLorean. Doc is even voiced by Reading Rainbow and Star Trek: The Next Generation actor LeVar Burton. Another episode involves the town news reporter expressing paranoia over an imagined alien invasion. As such, quick little verbal references are made to movies like Men In Black, Alien, E.T. and Predator. It's pretty clever and something that would be lost on young viewers, but parents and 80s babies will appreciate it. Other notable voice actors include Maurice LaMarche as Chief Charlie Burns, who may be most known for voicing Brain in Pinky & The Brain and Egon in The Real Ghostbusters; actress Lacey Chabert, from Mean Girls, as Dani Burns; and actor Jason Marden as Kade Burns, who voiced Duke in G.I.Joe Renegades and was most recently seen on the big screen playing Kenny in Blue Like Jazz. It's a solid voice acting team and an interesting enough show. I anticipate my son getting into it easily when he's a year or two older.

It's neat to see some cartoon series being given new life for new generations, and one franchise that seems up to the task is certainly Transformers. Young boys instinctively love cars and robots, so to make the series a little more friendly for younger viewers just makes sense. Diehard fans of the franchise will be surprised to learn that the evil Transformers, the Decepticons, don't make a single appearance in this series, as the show just focuses on the human characters and the drama in their community, which brings a new spin to the concept of the characters. While it may not be everything a Transformers fan can hope for, Rescue Bots is a great starter series for children who may be too young for the later series, and they just might learn a thing or two about teamwork and family in the process. Roll To The Rescue may seem a little stingy to only include six out of the series' 25 episodes, but it's a nice sampler and a great introduction to the show and characters.

- John DiBiase (reviewed: 9/28/12) Disclaimer: All reviews are based solely on the opinions of the reviewer. Most reviews are rated on how the reviewer enjoyed the film overall, not exclusively on content. However, if the content really affects the reviewer's opinion and experience of the film, it will definitely affect the reviewer's overall rating.