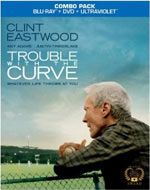 Trouble With The Curve

- for language, sexual references, some thematic material and smoking. 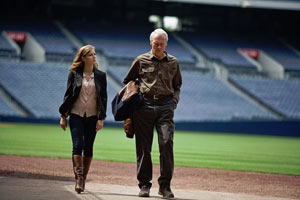 Gus Lobel (Clint Eastwood) has been one of the best scouts in baseball for decades, but, despite his efforts to hide it, age is starting to catch up with him. Nevertheless, Guswho can tell a pitch just by the crack of the batrefuses to be benched for what may be the final innings of his career. He may not have a choice. The front office of the Atlanta Braves is starting to question his judgment, especially with the country's hottest batting phenom on deck for the draft. The one person who might be able to help is also the one person Gus would never ask: his daughter, Mickey (Amy Adams), an associate at a high-powered Atlanta law firm whose drive and ambition has put her on the fast track to becoming partner. Against her better judgment, and over Gus's objections, Mickey joins him on his latest scouting trip to North Carolina, jeopardizing her own career to save his. Forced to spend time together for the first time in years, each makes new discoveriesrevealing long-held truths about their past and present that could change their future. (from MovieWeb.com)

First-time director Robert Lorenz may be new at calling the shots, but he's anything but a rookie when it comes to the going-on's behind the camera. Having worked closely with actor/director Clint Eastwood for about 20 years, his partnership with the expert filmmaker has taught him a thing or two about movie-making. For his directorial debut, Lorenz naturally enlists the aid of Eastwood by sticking the actor in front of the lens--exclusively, for a change--as the lead in Trouble With The Curve. 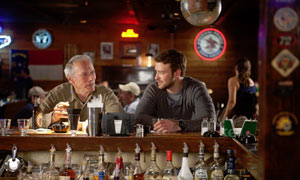 Although Trouble With The Curve has a lot to do with the subject of baseball, it's actually not really a sports film. If anything, Trouble With The Curve is more about growing old and family drama than it is about America's beloved past-time. Gus, played by Eastwood, is an aging player recruiter for the Atlanta Braves, who is unaware that his longtime employers are considering passing on the option to renew their contract with a man some are considering a has-been. With the passing of time has come the changing of tradition, and Gus represents a bygone age of baseball, with computers playing a big part in the process now. To make matters more complicated, Gus is starting to struggle with glaucoma, and soon must rely on--begrudgingly--his estranged daughter, Mickey (played by Amy Adams)--an aspiring lawyer with a heart for the game. When the two are forced to work together and spend time together, it creates an uncomfortable atmosphere for both of them that forces them to rethink their lives and everything they've known up until now.

To complicate things further, a former player-turned-recruiter named Johnny, an old colleague of Gus's, likes what he sees when he lays eyes on Mickey and tries to spend as much time as he can with the pair (and especially Mickey) as he can. Played by Justin Timberlake--yes, the egotistical popstar-turned-actor--Johnny actually turns out to be one of the few really likable characters in the movie. Both Mickey and Gus are heavily guarded and often standoffish people, while those entrenched in the sports industry don't fair much better at all. Matthew Lillard plays your stereotypical youngblood who is gunning for a management job and believes Gus is truly a dinosaur. He hardly knows as much as Gus does about the game and has gotten by just fine regardless. Then there's the potential all-star baseball player that Johnny and Gus are scouting; this kid puts the pomp in pompous and, while we're not supposed to like him, his scenes are pretty painful to watch. In the end, you have a film that's largely about a grumpy old man and his bitter daughter who meet a happy-go-lucky guy who is, like them, scouting a total doofus to be added to their ballclub--which is run by a bunch of money-hungry jerks. Sound like an appealing film? 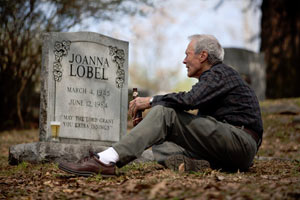 Thankfully, it's not as bad as it sounds. Lorenz and Eastwood do the best they can with a sometimes interesting, sometimes predictable script (it's actually not all that far off from In Good Company, however), which magically contains some weighty and meaningful themes and topics that include abandonment as a child, the loss of a spouse, growing old and feeling worthless, and child molestation (this one is downplayed heavily, but basically we hear that a child was almost taken advantage of by a stranger). It gives the film heart and meaning, but it's wounded by the scarcity of likable characters. Amy Adams is generally a likable person in general, so it's not difficult to feel for what she's going through, but the rift between her and her father is a bit of a stumbling block. The romance between Mickey and Johnny is meant to be cute and light--which is needed given the weightiness of the movie--but in some ways, it also seems a little childish for a movie like this.

Trouble With The Curve is probably saved mostly by the presence of Eastwood and Adams. If someone else were in Eastwood's place, it probably wouldn't have been as watchable, but there's something about Eastwood alone--and maybe it's just because the actor has become such an icon for film--that makes it a bit easier to pity his character. There's never a point in the story where you wish harm on Gus; if anything, you want to learn why the man is the way he is and that tends to keep our interest as a viewer.

The content in Trouble With The Curve is mostly heavy in the profanity department. "H*ll" and "*ss" are used most frequently, and Eastwood growls the lone "F" word when he gets into a scuffle with a drunk at a bar. There's also quite a bit of blasphemy which is just uncalled for, and it's this kind of stuff that does put an added damper on the film. By the time Gus grunts out his tenth cuss word through gritted teeth, it just feels a bit over-the-top in an effort to paint the picture that this guy is grumpy and unhappy.

Trouble With The Curve is a decent drama with just enough love for baseball expressed in it to make it appealing to fans of the sport. It also plays well as a father/daughter tale (and especially a dysfunctional one), but ounces of predictablity cloud the potential for a more poignant story here. It's certainly not a loss, but there was probably a stronger story in the mix somewhere. In the end, the film just has a little bit more trouble with it than handling a curveball.


Trouble With The Curve is available in a Blu-Ray/DVD combo pack or on a single-disc DVD, in addition to the usual digital outlets. Along with the feature film -- which is incredibly clear in HD (almost too much so, considering the detail it gives in everyone's faces)-- we have two short behind-the-scenes extras...

Behind The Scenes: Rising Through The Ranks (4:37) - This featurette addresses director Robert Lorenz's graduation from producer to first-time director. While this is his first director's project, he's actually been working with Clint for the past twenty years.

Behind The Scenes: For the Love of the Game (6:02) is not about baseball as you might think from its title. Here, Amy Adams and Justin Timberlake talk about their respective roles and their on-screen relationship together, as well as what it was like to work with the legendary Clint Eastwood. There's also some really great b-roll footage of the cast and crew on set while filming the lake scene, as well as some candid interviews. Sadly, less than eleven minutes between the two featurettes is super short to be all you get here. I really expected a lot more delving into the baseball aspects of the story and the extended cast.

Sex/Nudity: Gentry comments that when he gets to the majors, he'll "bang" a girl from "Desperate Housewives." Another player then asks what if the girls don't want to "bang" him; Gentry calls a pudgy player "bacon boy" and says something about him being greasey, so the player fires back "I used all my grease last night on your mother!"; Gentry tells his teammates he's doing his "visualizing" and lists "I'm banging chicks" among them; Johnny kisses Mickey while trying to get out of a fight with a drunk and says she's his sister and they like to get crazy sometimes; Gus's friends stare at his black eye and Gus says "What are you fellas staring at? I'm not a pole dancer;" A guy comments that Gus is traveling with some young babe and another guy laughs and says "Wow, I'm surprised he can still get it up!"; Gus knocks on Mickey's door and asks if she has a man in there. She responds jokingly that she was about to get in the shower with one; Johnny strips down to his boxers and jumps in a lake and encourages Mickey to join him. She then takes off her pants (she's in a t-shirt and panties) and jumps in. Soon they passionately kiss in the water but the scene ends; We hear a story about a man who had his hand up the back of a six-year-old girl's shirt, but the child's father intervenes before anything else happens (we just see the man rubbing the little girl's clothed arm).

Blood/Gore: Gus has a black eye and a cut on his cheek after a car accident; During a flashback, we see a little blood on a man's mouth after being punched.

Violence: A man starts heavily flirting with Mickey and won't back down, so Gus pushes him up against the wall, breaks a beer bottle and holds it up to his neck, threatening to "cut your f----g face off!" but Johnny and Mickey pull him back; Gus trips and falls a few times; Gus's car gets side-swiped when he pulls out into an intersection; A kid gets beaned in the back with a ball during a game; We see a man punching another man repeatedly in the face during a flashback (it's dark/dimly lit, however). We hear that the victim passed out. Disclaimer: All reviews are based solely on the opinions of the reviewer. Most reviews are rated on how the reviewer enjoyed the film overall, not exclusively on content. However, if the content really affects the reviewer's opinion and experience of the film, it will definitely affect the reviewer's overall rating.