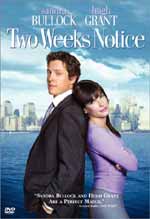 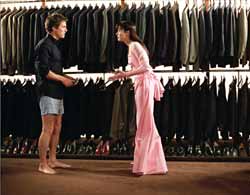 Millionaire George Wade (Hugh Grant) doesn't make a move without Lucy Kelson (Sandra Bullock), his multi-tasking Chief Counsel at the Wade Corporation. A brilliant attorney with a strategic mind, she also has an ulcer and doesn't get much sleep. It's not the job that's getting to her. It's George. Smart, charming and undeniably self-absorbed, he treats her more like a nanny than a Harvard-trained lawyer -- and can barely choose a tie without her help. Now after five years of this, Lucy is calling it quits. What ensues is a funny and charming romantic journey as Lucy tries to leave and George tries to decide what's most important to him...

Ah yes, romantic comedies. The last Hugh Grant romantic comedy I saw was the surprisingly depressing Notting Hill. While I like Grant as a character actor, that film left a bad taste in my mouth for a lot of romantic so-called comedies. While I often enjoy a good formula romantic comedy like You've Got Mail, My Big Fat Greek Wedding, or Serendipity, it's the ones that have more frustrating and sad moments than comedic ones that always burn my biscuits. But I went into Two Weeks Notice with an open mind and was handed a well-rounded romantic comedy.

Two Weeks Notice has an almost reverse basic plot of Notting Hill with Grant being rich here as Roberts was a superstar in Hill and Bullock playing the regular girl off the street while Grant had that role in Hill. Grant plays the womanizing yet down-to-earth millionaire very well as in Hill he pulled off the every man's man equally as good. Bullock's Lucy character is hilarious without seeming too goofy but has this ultra-liberal save the environment, Bush-hating, pushy political stance that seemed overbearing and unnecessary from time to time. The two played very well off of each other. Grant's charm was perfect and made you like him even when he was being shallow or selfish. Bullock's reactions to his actions and remarks made the scenes the two shared especially fun to watch.

Surprisingly enough for a PG-13 like this these days, this film has very few swear words. What brings this movie down, however, is some sexual content mainly present verbally. With George being a womanizer, many jokes are made about this. In one sequence, while George and Lucy are chatting, she drops and earring and as she picks it up and stands up again, she catches her hair at George's belt and they struggle to get her off as his brother walks in. That implies the obvious while in another scene Lucy walks in on June and George playing strip chess and we see him in his boxers

and her in a small bra and panties. Obviously the film would have benefited from the absence of such sequences and dialog and it's a shame its present as it hinders the film.

Aside from those beefs, the only other problem the film has is perhaps following too closely to the tired out romantic film formula. We all know it: Guy meets girl. Pair would be unlikely mates. Pair falls in love and soon has a falling out ("falls in love" part is optional this early in the formula). Pair realizes they need each other. Pair reunites in the end for a brief and joyous happy ending. What saves Two Weeks Notice from this redundant plot are the characters, the humor, and the chemistry between Bullock and Grant.

All in all, I enjoyed Two Weeks Notice but due to Hollywood's fixation on sexual humor in dialog or physically, I can't recommend the film with a clear conscience. This film could have been easily edited to be PG. Well, I guess we could always wait till it's on DVD and watch it on ClearPlay or something without all the junk.

Sex/Nudity: Mostly in dialog. Some words about affairs they've had are exchanged at a divorce hearing between George and his wife. In one scene, while George and Lucy are chatting, she drops and earring and as she picks it up and stands up again, she catches her hair in George's belt and they struggle to get her off as his brother walks in. It obviously looks bad to him, so George pulls his belt out to release her from his belt. While drunk, Lucy briefly talks about how good she is in bed. Lucy walks in on June and George playing strip chess and we see him in his boxers and her in a small bra and panties. Lucy tries to cover up the fact that she's alone by saying she's sleeping with someone.

Alcohol/Drugs: Some people drink beer and wine in the film. Lucy gets drunk in one scene.

Violence: If any, it's merely comedic. Disclaimer: All reviews are based solely on the opinions of the reviewer. Most reviews are rated on how the reviewer enjoyed the film overall, not exclusively on content. However, if the content really affects the reviewer's opinion and experience of the film, it will definitely affect the reviewer's overall rating.