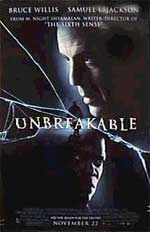 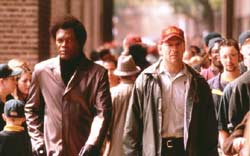 David Dunn's (Bruce Willis) life is turned upside down when a sudden catastrophic train accident leaves David as the lone survivor of the wreck. Not only is he the only survivor but he is completely unharmed. Hearing of the incident, Elijah Price (Samuel L. Jackson), an eccentric comic book collector with a horrible condition which renders him extremely sensitive to bone fractures, finds Dunn to inquire about the experience. Upon finding him and proposing a supernatural explanation, so begins the search for the truth behind what actually happened and why David survived the wreck.

Before I saw Unbreakable, I had heard a lot of opinions about it. Most of them were highly negative, filled with disappointment and disgust. After seeing a highly promising preview for a film with an intriguing plot, great cast (Bruce Willis), and talented director (M. Night Shyamalan, who directed 1999's The Sixth Sense), I had made up my mind I'd see it despite public opinion. What I found was a really bizarre movie with a good story, great plot twist, good acting, yet some pretty disturbing moments. 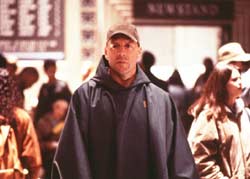 This is one of those movies that you will not get anywhere near what you expect from it if you see it based on its marketing campaign. The trailer ads you see in the theaters set you up for a Sixth Sense-like thriller and although similarities exist, it's completely "out there" and unexpected. This movie is a lot slower, darker, and done in a lot more of an artistic, almost fantasy-like fashion. Unusual camera placement and angles are used and dark lighting exists in almost each scene. It's often quiet, as well, the instrumental music is scarce, but when it does exist, it's quite prominent and assists the movie quite well. But the biggest thing about this movie that is throwing off everyone is the overall plot. Forget the real-life creepiness of The Sixth Sense. The plot pretty much revolves around comic books. It's all about one man's belief that he is extraordinary, and his life-long search for someone extraordinary just like him.

The content of the film was definitely PG-13, however, its disturbing nature at times definitely pushes the envelope by way of its more mature themes. The following may give a tiny bit away of the plot, but it's necessary to let you know what's in the movie... at some point, David Dunn (played by Bruce Willis), learns, as he works as a security guard, that when people touch him, he can see sins and crimes they've committed. For instance, we see a man walk up to another man's door, tell him he likes his house and wants to come in, and ends up killing said owner of the house (we don't see it, just see him lying dead) and tying up his two daughters and wife. This is the peak of its disturbing nature. We also see a vision of a young girl passed out on a bed and a boy commenting on her drinking too much. We then see him close the door to the room and the vision ends, hinting that the girl was taken advantage of. These events make for an eerier setting and add to what is going on with David, but they are clearly unsettling to say the least. Although not graphic in nature, they are unsuitable for younger audiences and may be too much for Christian viewers as well. With that laid out, the film only has a few other objectionable moments. Blood/gore is kept to thankfully a minimum to where we see a covered up body blurred out in the foreground of a hospital setting while a doctor is talking to David, and we see the sheets on breathing body slowly get soaked red with blood. Although blurred out to an extent, it is still pretty intense. Also, we see the wrists of some people bound that are a little bloody. Language is kept to 1 "S" word and a few other lesser ones, however, there are several uses of blasphemy that were highly unnecessary. Sexual content only exists in the form of one lewd comment (meant to be funny), and the incident mentioned above which hints at rape but nothing is seen or heard at all.

So what are the good aspects of the movie? It is a highly creative and inventive storyline, and something completely different than I've ever seen. Although completely strange and unusual at first, it's an incredibly well-done story. I would carefully go over what is here and what is listed below in the summary before deciding to see this film. I certainly found it unsuitable for anyone younger than late high school (at least), but it will be unsuitable for some adults as well.

In summary, I thought the movie was good, but had its many flaws, mostly content-based. Before I heard negative feedback about the film, I expected a lot from it. However, a pretty good film existed underneath a blanket of odd occurrences and some disturbing situations.

**2019 Follow-Up** I first saw the film at the age of 20, and I've since watched it a couple more times as an adult. It's a movie that actually gets better with more viewings. As a kid just out of my twenties, I couldn't relate in the same way as a later 30's married father of one. The film definitely holds a greater impact as an adult viewer. The film also was ahead of its time. It released before superhero movies were popular; it was before the hit Tobey Maguire Spider-Man films, and only released a couple months after the hit first X-Men film. Also, in 2016, the psychological thriller Split introduced a new villain into the Unbreakable universe, and 2019's Glass united characters from both movies to bring the storyline to a close. I'd say, now, that Unbreakable has aged extremely well and is more relevant today than it was when it first released. - John DiBiase, (1/19/19)

Sex/Nudity: 1 really crude comment is made. In a vision, it is hinted that a guy takes advantage of a girl who is passed out drunk. All we see or hear is him closing a door, however, and we are to assume something happens (but never officially find out)

Alcohol/Drugs: David stops a possible drug dealer, some people drink beer and such throughout the movie.

Blood/Gore: While David is sitting on a table in the ER, we see in the foreground that there is a body with a sheet covering them. As the doctor talks to David, we see a bloodstain on the sheet covering the body slowly grow larger. David finds a dead body. The wire binding a victim's hands together has caused their wrists to be marred and a little bloody.

Violence: Someone falls down a flight of stairs; a huge train wreck, although unseen, occurs; 1 fight, a man is killed off-screen, 3 women are tied up, a young person holds a gun to another person, etc. Disclaimer: All reviews are based solely on the opinions of the reviewer. Most reviews are rated on how the reviewer enjoyed the film overall, not exclusively on content. However, if the content really affects the reviewer's opinion and experience of the film, it will definitely affect the reviewer's overall rating.