VeggieTales: The Ballad Of Little Joe 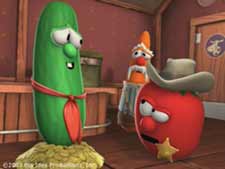 Now, y'all have heard the story of Joseph and his coat of many colors before, but I reckon you've never heard it told as a Western... until now! Join Little Joe (played by Larry the Cucumber) and his rootin' tootin' French pea brothers on an adventure that will take them from an abandoned mineshaft all the way to Dodge Ball City -- with Little Joe's faith being tested every step of the way!

Even if, for some bizarre reason, you didn't like VeggieTales, you can't deny the creativity and cleverness poured into each episode. In the case with The Ballad Of Little Joe, the masterminds behind the show have taken the familiar and timeless Biblical tale of Joseph and have retold it unlike any other way it's ever been told! To teach kids about facing hardships and persevering through them with God's help, they've taken a more tangible approach to the story and have set in the Wild West. Bizarre? Perhaps, but oh so effective.

All elements to the story were pulled off beautifully. Even when Joseph rejects a pass from his master's wife in the Biblical story, the Veggie minds work in an angle where Little Joe is setup and betrayed by Madame 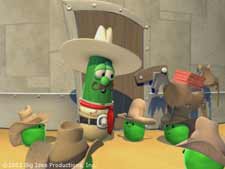 Blueberry's character while he's working at a saloon. And instead of Joseph becoming a high official of Pharoah, Little Joe becomes in charge of the town.

Traditionally, the video includes an intermission that pauses for the infamous Silly Songs With Larry segment. This time around, the guys parody *NSync and pretty much any ridiculous boy band as a new group called Boyz In The Sink. Although it might seem a little late as it's now a couple years after the style had peaked in popularity, the song is still a joy to watch as the memory of these groups are still fresh in our minds and solo remnants such as Justin Timberlake still exist.

With the right mix of humor, seriousness, and a touching message are blended make The Ballad Of Little Joe easily one of the best VeggieTales episodes to date. Keep them coming guys, they never cease to amaze.