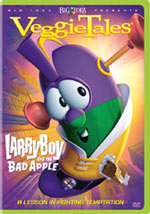 VeggieTales: LarryBoy and The Bad Apple 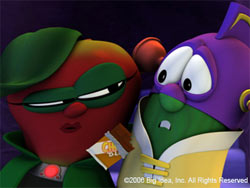 Something is rotten in the peaceful town of Bumblyburg! The Bad Apple has dropped onto the scene and is trying to take control of the town by making all of its citizens give into their temptations. Everyone is in danger -- Mayor Blueberry, Reporter Petunia, Butler Alfred - even the town's fearless defender, LarryBoy! Will the good people of Bumblyburg be able to resist the tricks of the Bad Apple? Can LarryBoy see through the sour plot and save the day? LarryBoy and the Bad Apple teaches kids that we can't fight temptation on our own -- we need God's help and the help of our friends. (from BigIdea.com)

It's been some years since the folks at Big Idea have brought a LarryBoy story out in their regular CGI animated series. The last time we heard from LarryBoy was over three years ago when he appeared in the 2-D cartoon DVD The Good, The Bad The Eggly. Now, the plunger-eared hero is back to battle temptation in LarryBoy and The Bad Apple.

Where the last 3-D LarryBoy show featured Larry The Cucumber's alter ego as a Batman-esque hero who saved the earth from a rumor in 1999, LarryBoy and The Bad Apple smartly incorporates more traits akin to Spider-Man this time around, including LarryBoys's ability to "sling" between the buildings with his suction cup ears (and even using them to stop a large object in a parody of Spider-Man 2 where Spidey had to stop a runaway train). The Big Idea folks know how to pull from different sources just right in near subtle ways, which gives LB and The Bad Apple a special charm. 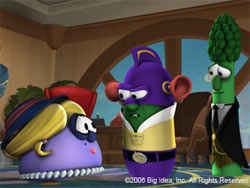 The Bad Apple may just take the cake as the creepiest villain to come out of Big Idea's creative team yet. Most likely to frighten some of the younger ones, The Bad Apple is a sultry little thing who uses her manipulative ways to lure the citizens of Bumblyburg into her control. The Bad Apple embodies temptation, overcoming her victims by preying on their weaknesses. The Bad Apple is just that... but as the story progresses, we discover that she's more than meets the eye. When she sheds a green cloak, we find that she dons mechanical spider legs underneath with which she uses to spin her webs of temptation to snare her victims. At this point The Bad Apple isn't just sinister, she's downright creepy and will be hard to watch for anyone who has anything against spiders. But The Bad Apple serves as a worthy adversary for LarryBoy, using his weakness for chocolate against him in what turns out to be a wonderful joke on Willy Wonka. And the parents who have a child who struggles with placing video games above more important priorities, they'll appreciate Reporter Petunia's weakness with them (which leads to a wonderful, unexpected parody of Tron)

Overall, I thought LarryBoy and The Bad Apple was a clever and fun installment in the LarryBoy and VeggieTales series. While I thought the Big Idea team made great use of the superhero genre for pulling inspiration for this story, I also thought they could have taken it a bit further. Also, I think the story probably spent more time overall with The Bad Apple and her mischievous ways than with its title character. And I was surpised Bob The Tomato barely appears in the episode. I don't recall how much (if any) of a part he played in the two previous 3-D cartoons, but I do recall him being in the 2-D ones (however, his contribution after this story is priceless and seemingly long overdue). Finally, although real temptation will forever be a lot worse than a creepy apple with spider legs and the ability to web its victims, I felt The Bad Apple may have been a little much here for some kids. While that makes triumph over temptation all that more appealing, I'm just concerned it's the kind of stuff nightmares are made of.

When all is said and done, LarryBoy and The Bad Apple is the fun return of our favorite plunger-eared superhero we've all been waiting for. And here's to hoping it won't be quite as long before he rescues Bumblyburg once again...

- John DiBiase (reviewed: 7/31/06) Disclaimer: All reviews are based solely on the opinions of the reviewer. Most reviews are rated on how the reviewer enjoyed the film overall, not exclusively on content. However, if the content really affects the reviewer's opinion and experience of the film, it will definitely affect the reviewer's overall rating.