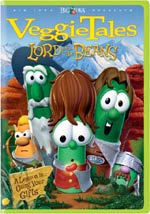 VeggieTales: Lord Of The Beans 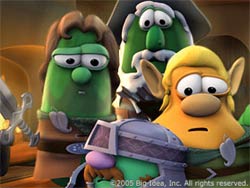 Lord of the Beans follows the fantastic journey of a wide-eyed Flobbit named Toto Baggypants (Junior Asparagus) who inherits a bean with amazing powers from his Uncle Billboy (Archibald Asparagus). In this moving story, young Toto learns that he has been given an extraordinary gift -- but what is it for? Together with Randalf, fearless ranger Ear-A-Corn, sharpshooting elf Leg-O-Lamb, and surly dwarf Grumpy, Toto forms the Fellowship of the Bean and embarks on a dangerous quest to find the answer to his question. (from BigIdea.com)

VeggieTales has been an unmatchable force in the Christian entertainment industry for a decade, always raising the bar in quality. With many episodes under its belt, including one theatrical film, the series has only grown more and more creative and impressive with nearly each installment. Following this Summer's delightful Minnesota Cuke and the Search for Samson's Hairbrush, the lovable produce return once again with the clever spoof, Lord Of The Beans.

I hold a soft spot in my heart for spoofs. It's often fun to see familiar stories given an intelligent or silly spin on them. The VeggieTales team have snuck inside jokes and spoofing moments into many of their stories since the beginning of the series. Minnesota Cuke was one of the first feature-length spoofs in the series, often brilliant in its joke on the Indiana Jones universe. Lord Of The Beans goes beyond what Minnesota Cuke accomplished, bringing plenty of laughs and fun for anyone familiar with The Lord Of The Rings books and films. 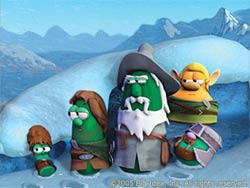 Actually, it's that fact that may be the one and only hindrance to Lord Of The Beans. The videos, although made by adults, are primarily made for children. Since The Lord Of The Rings films aren't quite children friendly (okay, they're not at all...), there's a very good chance all of the inside jokes will be wasted on them. In fact, while the lesson and delivery is geared towards children, it's a tale that would be best enjoyed by adults. And the spoofing is just plain perfect. From reinventing the evil Orcs as Sporks to including the unnamed Keebler elf as a brother of Leg-O-Lamb, the Big Idea team's creativity abounds from the story's start to finish. The bizarre but cute "Silly Songs With Elves" isn't the best from the Silly Songs tradition, but it's still a fun added treat.

Adapting elements from mainly the first Lord Of The Rings story, The Fellowship Of The Ring, and adding plenty of original twists to reinforce the theme of discovering your God-given gifts, we're treated to glimpses of the treacherous Much Snowia, The Blue Gate, and even a musical score that pays homage to the film's memorable themes. The use of vibrant CGI for the characters mixed with flat, almost watercolor style backgrounds and hand-drawn flashbacks rounds out this truly remarkable VeggieTales adventure.

The creative minds of Big Idea never cease to amaze me. Lord Of The Beans is a unique, silly, and often brilliant tale for the whole family. It will be most appreciated by those familiar with The Lord Of The Rings stories, but isn't entirely wasted on those not. The lesson is one for all ages and is executed beautifully. Lord Of The Beans may just be the best thing from the Veggies yet!