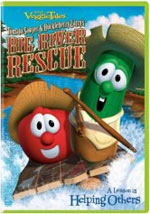 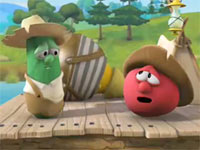 Tomato Sawyer and Huckleberry Larry's life on the lazy river takes a turn for adventure when they help a stranger in need. With unexpected twists around every bend, they discover that while helping others may not be the easiest thing to do, it's always the right thing to do!(from BigIdea.com)

As the VeggieTales videos progress, it's always somewhat amazing - for someone like me who's followed the series since its humble beginnings - to see how the Big Idea folks continue to advance and improve the look and feel of the episodes. While many of the latest adventures center on spoofing familiar tales or even pop culture (something I've always enjoyed on a personal level), the writers inject plenty of original, fresh, and fun ideas into each story -- giving VeggieTales a creative flair that most Christian entertainment is sorely missing. 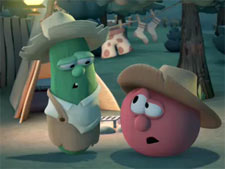 The latest sort-of parody is loosely based on Mark Twain's famous novel, Huckleberry Finn, getting the VeggieTales treatment as Tomato Sawyer & Huckleberry Larry's Big River Rescue. The adventurous Veggie story finds Bob the Tomato and Larry the Cucumber helping a poor, innocent enslaved lumberjack on-the-run get back to his mother in St. Louis. To do so, the kind vegetables sacrifice everything they have to help a poor stranger in need. What might appear to be a simple children's cartoon proves to possess a poignant message that anyone of any age and background can relate to and learn from.

While every VeggieTales venture is edifying and quality entertainment, they do vary in the success of their execution. Tomato Sawyer & Huckleberry Larry's Big River Rescue won't go down as one of their best efforts, but there's plenty to love about the humor and heart behind this tale of doing the right thing to help others in need. The lesson, which nicely finds Larry stepping in as the heart and Bob - as usual - playing the part of the temporarily misguided veggie who reasons with his mind and not so much his soul, works on a simple yet wonderful level for getting its point across. However, while past stories and adventures have been riddled with laughs and fun from beginning to end, Big River Rescue just doesn't deliver quite as well as a story like Gideon Tuba Warrior or The Wizard Of Ha's has. But still, there are true moments of inspired genius (or at least smart wackiness) -- like having a French Pea fill the spot as a little Indian in the canoe of the narrator... who is supposed to be Mark Twain, but as Larry points out, is also reminiscent of KFC's Colonel Sanders. Then, from a lumberjack carrot named Steve who acts like a dog (?!) to a completely random and fantastic gag about vinyl records being long forgotten predecessors to mp3 players, there are plenty of fun surprises within. 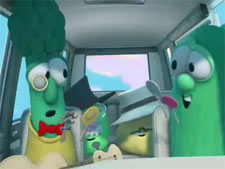 For the "Silly Songs With Larry" fans, this installment throws a curve (like many of the recent ones have tended to) and gives us "Silly Songs With Archibald" -- a bittersweet change from the norm. The song is delightfully fun, if not perhaps more random than usual (is that possible?), but is not likely to go down as one of the more memorable "Silly Songs." Lastly, the surrounding countertop story that bookends the "Big River Rescue" contains a fun little jab at book clubs, "Cliff Notes," and the student's tendency to skip the literary assignment in school and cheat with the help of any other adaptation of a book (and now thanks to the Internet, this is even easier!).

Tomato Sawyer & Huckleberry Larry's Big River Rescue may not be the best Veggie tale to date, but its message is a crucial one that children need to hear and take to heart. Grounding it in a Biblical truth without going over the young audience's heads, the idea of helping others and sacrificing our own wills for another person is broken down into simple and easier to understand terms for growing minds. Big Idea struck gold in this department, and it's a joy to see this kind of message being shared in a society that often teaches the idea of looking out for number one. Tomato Sawyer & Huckleberry Larry's Big River Rescue is another great VeggieTales lesson.

- John DiBiase (reviewed: 8/3/08) Disclaimer: All reviews are based solely on the opinions of the reviewer. Most reviews are rated on how the reviewer enjoyed the film overall, not exclusively on content. However, if the content really affects the reviewer's opinion and experience of the film, it will definitely affect the reviewer's overall rating.