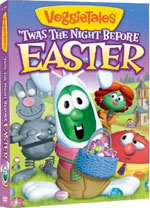 VeggieTales:'Twas The Night Before Easter 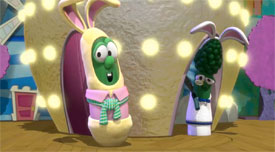 Its Easter time in Crisper County and cable news reporter Marlee Meade is hunting for a way to help others. She cooks up a plan to save the old theater with a cast of costume-clad townies, massive props and a 20-foot robot rabbit to perform Up With Bunnies. Now theres only one thing missing  the star of the show! When word spreads that singing sensation Cassie Cassava (Melinda Doolittle) is arriving to perform in her hometown churchs Easter service, Marlee schemes to steal the starlet for her own pageant! But when things go haywire, will it be curtains for Marlees dreams  or will she discover the true meaning of Easter and what helping others is really all about?

The latest VeggieTales DVD, 'Twas The Night Before Easter, releasing in time for the Spring holiday, is filled with so many important lessons delivered in a cheerful and kid-friendly manner, continuing the VeggieTales tradition of producing excellent media for children. The opening of the special begins with Bob the Tomato not being very good at finding Easter eggs, when he starts to think about what the true meaning of Easter really is. Larry is so concerned about all the jelly beans, giant cream-filled chocolate bunnies and eggs, while Bob tries to focus on the Biblical importance of Easter being about Jesus coming to serve others. An adorable young boy, Timmy, a Veggies fan who we see on Qwertys screen also wants to learn more about what is really important about Easter. The large golden egg that Larry finds leaves the audience wondering what is inside, as the story continues with a comical lesson about characters in a community who are searching for themselves to find the importance of helping others. 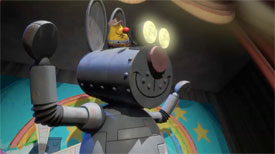 Crisper Countys Marlee Meade (Petunia Rhubarb) takes the center stage of the story as a television reporter on stories that she begins to realize are only fluff. Her helpful friend Lewis (Larry the Cucumber) who films her stories and helps with the writing of their cable access shows, listens to Marlee as she shares her desire to find a new career that will actually make a difference and help people in her community. She believes that she might be able to use her theater background to bring a musical show to the public that she thinks will really help them. Although it seems drastic, she quits her reporter job so that she can pursue making a big production with the help of Lewis, who will write a musical theater show called Up with Bunnies right in time for Easter! Next, Marlee begins to think about the importance of having a special star performer who will be the main attraction in her show.

The other story in the same community involves pastor Erwin (Bob the Tomato), who is concerned about his churchs Easter morning Sunday service that will feature the singing performance of one of the churchs members, Cassie Cassava (voiced by Melinda Doolittle, an American Idol finalist). Pastor Erwin is so excited that Cassie, the winner from a talent singing competition, will be coming home for the Easter weekend to sing in his sun-rise church service. He hopes that it might help to boost the attendance of his congregation on Easter morning, when Madame Blueberry reminds him that it is more important to be concerned about the homeless people at a nearby shelter who she wants to serve. When Marlee learns that Cassie is returning to the community for Easter weekend, she becomes determined to find a way to actually get Cassie to perform as the star in her show. The two stories become intertwined when Pastor Erwin reminds Marlee that Cassie can only sing in one performance Easter weekend.

With both Pastor Erwin and Marlee in competition to get Cassie to sing in their shows, Marlee gets the brilliant idea to add lots of spectacular attractions to her show. Some might think a giant robot-sized bunny is a bit over the top for some, but VeggieTales does not disappoint with the creation of Gary, the 20-foot robot rabbit who is Howards invention (Mr. Lunt)! I thoroughly enjoyed seeing the turbo-charged hopper bunny make his appearance when the auditions and rehearsals began for Marlees musical theater show. It is the creativity of VeggieTales that can create a fun new character as the centerpiece for this special that kids will find very amusing and action-packed! On a side note, I also found the nod to the Broadway show of Evita to be a sweet bonus in the show, when the cast of Marlees musical performs a number inspired by Dont Cry for Me Argentina called Dont Cry for Me Easter Bunny! Not to mention the musical treat from the French peas, Jean Claude and Phillipe, who perform a dazzling special of the latest dance craze called the Hopparena. Many viewers will recognize that familiar theme from the classic Macarena, that sweeped the nation years ago. However, the adorable bunny slippers and the bunny ears worn during the French peas' dancing lesson attempt for Archibald Asparagus make this silly song another memorable one that young children will love to sing-a-long to! 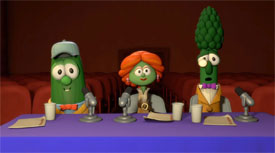 The rehearsal of the musical number for Pastor Erwins choir comes in as a close second, for an awesome catchy tune. Instead of singing about bunnies, Bob the tomato directs the group as their song focuses on thinking about Gods love on Easter. Cassie finally makes her debut singing performance during the rehearsal of the number, when a scheme to convince Cassie that she must sing in Marlees musical theater performance hatches! The performance of Up with Bunnies becomes a memorable silly song as well when things get a little out of hand with Gary the robot bunny. Some children might get scared at this point in the show, when we see Gary destroying the roof of the theater building, but I think the kids will be distracted with the hilarious smile on Garys face as he crashes to the ground.

The true surprise of the show is when Marlee finds herself having a meaningful conversation with a mother at the local homeless shelter. She begins to realize that although she thought there was such amazing power behind the magic of musical theater, the only way to really reach people is to help them meet their needs. The lesson about Gods love for His people now becomes the focus, as the VeggieTales characters talk about the love of Jesus and how He came to serve others. I especially liked hearing the church choir sing one of my favorite hymns, Christ the Lord is Risen Today, when we see all the VeggieTales characters singing together. Pastor Erwin wraps up the service with a special message about Jesuss death and resurrection, which really brings the Easter message home to the viewers. The 'Twas The Night Before Easter DVD closer and wrap-up with Bob and Larry talking with Timmy also speaks about how Jesus is the most important part of Easter. Even though Larrys large golden egg is empty, Bob reminds him that it is a great way to remember how it compares to the empty tomb of Jesus when he rose from the grave. Jesus giving his life as a ransom for many is a message that the viewers will take home from this wonderful new DVD that is a special new favorite in my family's collection.