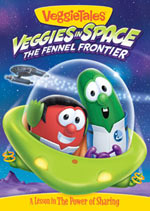 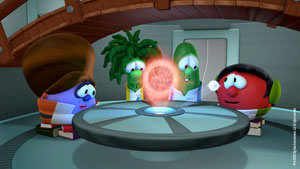 A Lesson in The Power of Sharing! Join Captain Cuke (Larry the Cucumber) and his loyal first officer, Mr. Spork (Bob the Tomato), as they embark on an out of this world adventure to bravely travel where no Veggie has ever been. The entire USS Applepies crew takes on Luntar the Looter, a power stealing space pirate, but they're in for a big surprise when they find out what's motivating him! (from VeggieTales.com)

I've said it before, but it's worth repeating: I'm a sucker for a really good spoof. Spoofing popular stories and franchises isn't something foreign for the VeggieTales team. Even since the first episodes of the series, Star Trek was spoofed when Bob and Larry enlisted Junior's help to save the U.S.S. Applepies in an attempt to teach him a lesson in friendship. The vessel's faitful crew finally makes a return to teach a lesson in sharing, something parents of any young child will be chomping at the bit to present to their children.

As a father of a 3-year-old little boy myself, sharing is a concept and theme I have yet to fully get through to him. He's starting to make some progress, thankfully, but he still is quick to declare "mine!" when I just want to look at or touch a toy of his. We encourage him to "share" his belongings (and food) like we share with him, but he is still often reluctant. Veggies In Space: The Fennel Frontier finds the U.S.S. Applepies to be completely foreign to the idea of sharing, and the selfish crewmembers eventually get a pretty hard lesson in what it means to share with each other. 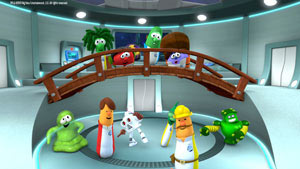 The story makes rapid-fire jokes and references to famous and popular sci-fi pop culture that parents will mostly catch and appreciate. Movies and franchises like Star Trek, Star Wars, Doctor Who, Apollo 13, Hitchhiker's Guide To the Galaxy, E.T., Back To The Future and even 2001: A Space Odyssey are all given direct nods or have lines borrowed from throughout Veggies In Space. It's clever, funny, and deliciously shameless. The wooden bridge cutting through the Captain's bridge on the Applepies and a floating audio-recording log acting as the Captain's Log are just a few of the witty and silly spoofs that litter this episode. It's always entertaining and fun and it helps keep things light as the lesson in sharing develops.

One of the funniest moments, and surprising given the release dateof this in conjunction with a film so recent, is the opening shot of the episode being a direct goof on the Academy Award-winning 2013 film, Gravity. From the lonesome, lost shot of Larry "floating in space" (against a wall of glow-in-the-dark stars), to the sound suddenly cutting out just like that film's score frequently utilized -- it's just wonderfully executed. And it sets the tone for what's about to unfold beautifully. 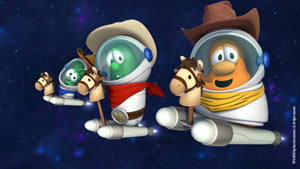 The episode is also pretty action-packed for a VeggieTales episode -- with giant, Veggie-manned (can you say "manned" when involving vegetables?) robot suits (think Avatar) briefly fighting to fiery popcorn meteor showers and some space-tacular explosions, it's one of the more action filled episodes in the Veggie catalog. However, it's never directly perilously violent, so I wouldn't worry too much for the little ones. It's probably just a little more action-packed than the recent Incredible Vegetables episode.

Fun, silly, fast-paced and witty, Veggies In Space is everything a parent and child could ask for in a VeggieTales episode. It's an original tale driven by great and easily recognizable references--both in dialog and visual form. Everything from the rolling pin nacels of the Applepies to a well-placed use of "It's a Trap!" and "Houston, we have a problem" is darn good fun and entertainment with a message for all ages to cling to.