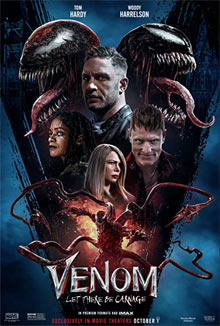 Venom: Let There Be Carnage

Eddie Brock attempts to reignite his career by interviewing serial killer Cletus Kasady, who becomes the host of the symbiote Carnage and escapes prison after a failed execution. (from IMDB)

In 2018, Sony partnered with Marvel Studios to bring a Spider-Man-related property to the big screen by taking the infamous villain Venom and giving him his own film. Tom Hardy embodied Eddie Brock, a sort of loser reporter who was pretty down on his luck when he came into direct contact with the symbiotic alien known as Venom. Venom hides inside Eddie's body and can take over completely as a sort of exoskeleton when he needs to fight... or feed. Sony treads a fine line between villain and reluctant hero with Venom and Eddie. He's certainly not a hero, though, but he's often put in situations where he's defeating a much worse kind of villain. In 2018's Venom, it was a rich man who was using homeless people as guinea pigs for these symbiotes and whether or not people could be suitable hosts. He makes things personal for Eddie and Venom, and so the duo find themselves fighting the film's central villain during the finale. The end credits bonus scene in that film introduced Woody Harrelson as a serial killer who takes a strange interest in Eddie, and a key line leaves the viewer with the tease of the next villain to come, Carnage. So 2021's inevitable follow-up, Venom: Let There Be Carnage, pits Venom against another far-worse villain in Carnage, and the movie ends up being another quirky, darkly comedic romp.

This time directed by Andy Serkis, who's most known for playing characters like Gollum (The Lord of the Rings), Snoke (Star Wars: The Force Awakens and The Last Jedi), Caesar (Planet of the Apes) and Ulysses Klaue in Black Panther, Venom: Let There Be Carnage amps up the comedic elements established in the first film while continuing to develop the bizarre relationship between Eddie and Venom. For example, Venom still craves human brains, but Eddie refuses to let him eat people, so they must resort to eating live chickens and copious amounts of chocolate. Oddly enough, the darkest elements of the this Venom sequel is almost entirely due to the film's bigger bad, Harrelson's Carnage. The man, whose real name is Cletus Kasady, is literally a blood-thirsty, sadistic killer who knows his time is up and tries to make a deal with Eddie to reveal where he's hidden the bodies of those he's killed in exchange for being kept alive. We soon learn that he has a love interest named Frances Barrison - AKA Shriek - who is a mutant who can hurt her foes, and break glass, by emitting a high-pitched scream. Cletus's endgame is to be united with his love, and he doesn't care what he has to do (or who he has to kill) to make it happen.

Serkis does a decent job in the director's chair for Venom 2, but there are definitely some moments that felt a bit sloppy. He does get creative at times - like telling Cletus's back story through animated scribbles of his - but Serkis's treatment can sometimes feel much too chaotic. The best moments of the film, arguably, involve Hardy's Brock and his relationship with Venom. The two quarrel like an old married couple and have a knock-down drag-out fight in Eddie's apartment which is just hilarious. Harrelson is good as Cletus/Carnage, but his character is quite disturbing and unsettling. Harrelson plays the character as quite twisted and unhinged - but not in a "fun" or light-hearted sort of way. The guy is about as bad as they get, which makes it work for Venom to go up against. While many superhero movies err on the side of keeping the fights and villains much too personal to the film's main character, it suits this story properly since Venom isn't out to be your "Friendly Neighborhood" Venom, so to speak; if Venom is going to fight against a bigger beast, it'll be because he has something to lose otherwise. 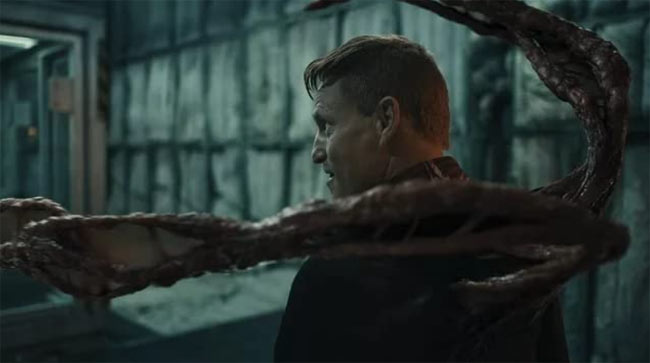 As I teased earlier, the content can be a bit edgy. There's some profanity - although probably just a little less than last time - with 1 "F" word from Venom near the end of the film, and an array of other colorful phrases throughout. There isn't much by way of visually graphic violence; some people's heads do get bitten off, but it's all depicted in ways that aren't graphic or gory (if that's possible?). Probably the "bloodiest" moment is when a human character bites another human character in the hand and we see a little blood on their hand from a distance and a close-up of blood on the attacker's mouth (which they lick off to taste). We hear a bit about Cletus's crimes and murders, including how he'd killed his grandmother and other members of his family, but also had been abused by them. It's heavy thematic material that some viewers probably won't be expecting when sitting down to watch this one. For the most part, it's content you'd probably expect from a movie about Venom, but there's still an unnecessary amount of profanity that continues to bog down the superhero genre.

I was also disappointed to notice that composer Ludwig Göransson did not return to score the sequel. I really grew to love his themes in the 2018 film, and I was looking forward to hearing them again (and maybe expanded upon). Sadly, composer Marco Beltrami, who's pretty hit and miss ("hit" being A Quiet Place and "miss" being just about everything else I've heard from him), threw out Ludwig's cues and offers up a pretty generic score in the end. It does work well enough within the context of the film, but it otherwise didn't stand out much on its own (other than just not being Ludwig's style or themes). 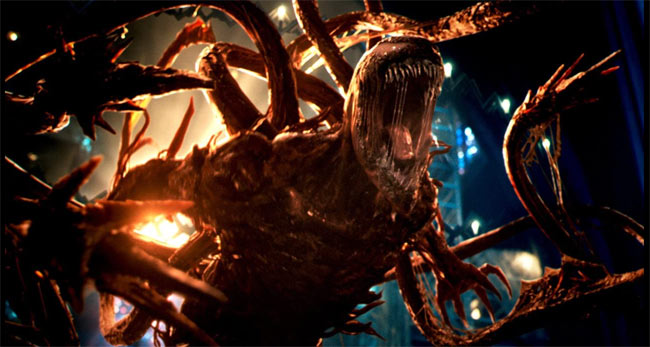 While the 2018 movie debuted to a mixed reception, I've found it to hold up quite well with repeat viewings. It's dark but the comedy lightens it up a bit - and Hardy's performance really pulls it all together. Venom: Let There Be Carnage is a proper follow-up and continuation of the first entry, and I'm very, very interested to see where things go from here. The mid-credits scene changes things completely for this series and it gets me eager for what's to come!

Sex/Nudity: An animated childish, unrealistic sketch shows a woman's bare butt; At a costume type party, we see some men dressed in drag; In the post-credits scene, we see a man exit his bathroom in just a towel.

Alcohol/Drugs: Eddie has some beer; some people have drinks in a restaurant.

Blood/Gore: Frances has scars on her face and a discolored eye because we learn in flashback that she had been shot in the face when she was younger; Eddie briefly has blood on a visibly broken nose before Venom fixes it; A man bites another man's hand and we see blood on the attacker's mouth. He touches it and looks at it to see it bubbling on the end of his finger and then he eats it; The transformations from human to symbiote form - especially Carnage - may seem gory as we see their faces get distorted as they morph into their gruesome appearances; Mulligan has some blood on his face while fighting with a character; Carnage shoves a tentacle into the man's mouth and down his throat, presumably killing him; A woman pushes her thumb into a man's eye; Venom seeps out of a man who proved to not be a suitable host (he falls over dead); Heads of humans are bitten off a couple times, but it's shown in a way that isn't very detailed or graphic.

Violence: (Some spoilers ahead) We see a flashback of Cletus and Frances younger in some kind of youth detention center where she gets taken away; As she tries to escape a van, a cop shoots her and she falls out of the back of the van; Venom and Eddie quarrel in his apartment and Venom punches Eddie's head through the ceiling and hits him in the face several times. He also throws Eddie around and then throws many of his possessions out the apartment window; We see quite a few body bags being carried away from a burial site; A man bites another man's hand and we see blood on the attacker's mouth. He touches it and looks at it to see it bubbling on the end of his finger and then he eats it; Cletus as Carnage brutally attacks, stabs, and beats up the security guards in prison; Cletus hangs a woman outside of Frances' cell and we see her legs kicking in mid-air; Carnage corners a security guard and the man begs for his life. Carnage then shoves a tentacle into the man's mouth and down his throat, presumably killing him; Cletus relays a story about how terrible his youth was and we see it animated as unrealistic, cartoony looking sketches. We learn that he pushed his grandmother down the stairs, killing her and murdered his mother by throwing a hairdryer into the bathtub with her. He also explains that he was abused and beaten up by his parents and grandmother, as well as the others in youth correction facility he was kept in; Carnage bites the head off a priest; We see a woman tied up (and alive) inside a coffin; A man is seen tied up and a little beaten up; Venom seeps out of a man who proved to not be a suitable host; Carnage and Venom fight during the finale and they stab each other and violently fight each other during a prolonged battle. Carnage has a large number of tentacles that often display blades/spikes on the ends of them and are used to stab Venom; A woman pushes her thumb into a man's eye; A man is beaten and choked and presumably left for dead, but we see them later wrapped in chains as their eyes light up (possibly awakening a creature inside them?); Carnage attacks and tries to kill Shriek because of the sounds she makes causing pain to him; A church bell falls from a distance and crushes a person; Venom bites the head off a man; ...And other sci-fi comic book violence. Disclaimer: All reviews are based solely on the opinions of the reviewer. Most reviews are rated on how the reviewer enjoyed the film overall, not exclusively on content. However, if the content really affects the reviewer's opinion and experience of the film, it will definitely affect the reviewer's overall rating.