War Of The Worlds

A contemporary retelling of H.G. Wells's seminal classic, the sci-fi adventure thriller reveals the extraordinary battle for the future of humankind through the eyes of one American family fighting to survive it. The film stars Tom Cruise, Dakota Fanning, Miranda Otto, Justin Chatwin, and Tim Robbins. Cruise stars as Ray Ferrier, a divorced dockworker and less-than-perfect father. Soon after his ex-wife (Miranda Otto) and her new husband drop off his teenage son Robbie (Justin Chatwin) and young daughter Rachel (Dakota Fanning) for a rare weekend visit, a strange and powerful lightning storm touches down. Moments later, at an intersection near his house, Ray witnesses an extraordinary event that will change all their lives forever. A towering three-legged war machine emerges from deep beneath the earth and, before anyone can react, incinerates everything in sight. An ordinary day has suddenly become the most extraordinary event of their lifetimes  the first strike in a catastrophic alien attack on Earth... (from Paramount Pictures)

Steven Spielberg's third venture into alien territory, War Of The Worlds, has one strike against it from the beginning -- it had already been made once before into a film, and it's a classic. But a contemporary retelling isn't a bad idea, in theory. And who would be better to do it than Spielberg, right? Well, that's what I thought before viewing the renowned director's take on the iconic H.G. Wells story. 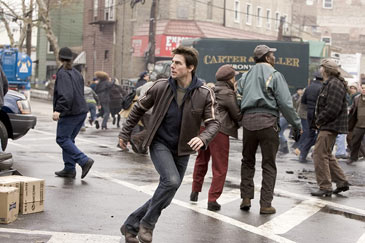 War Of The Worlds opens with Tom Cruise's character Ray getting off from work and arriving home late to greet his ex-wife and kids. It isn't long before we realize he's a deadbeat dad and his kids don't really like him. There isn't much to like about the film's central characters and, sadly, this doesn't change too much through the film's duration. In fact, the alien film becomes more about a lesson in parenting than almost anything else, and with that lies the movie's biggest flaw. While M. Night Shyamalan successfully used an alien invasion plot to deliver a message about faith, Spielberg's attempt at weaving in a message just doesn't seem to work. In Shyamalan's Signs, we were given ample character development from beginning to end, with much to like about the film's central family. Unfortunately, the Ferriers in War Of The Worlds just bicker, argue, and swear at each other most of the time.

What War Of The Worlds does have going for it is that it's certainly entertaining and often intense. The first half of the film was done wonderfully in setting up the way the aliens invade Earth. The tension that builds on the streets of New York and the mystery surrounding the aliens is just really exciting. While people begin investigating a mysterious hole in the ground that's been hit by lightening more than twenty five times, Spielberg uses little to no musical soundtrack, letting realism take over. Once Ray and his family are on the run, the tension continues as the trio face terror on the highway, a suburban house, a ferry, and right in the middle of a full scale war.

These action sequences leave plenty of room for some brutally violent sequences. One intense moment involves a mass of people swarming a minivan to take it over. The crowd gets physical, with one person even shooting a driver to get control of it (but the actual shooting isn't really shown). When the aliens attack, we see many people literally vaporized by the alien ships' rays in full-on classic sci-fi horror movie fashion. While not gory in any way, Spielberg's direction of it makes it disturbing. Finally, a startling revelation about one of the intentions of the aliens for people is rather gruesome, but Spielberg is selective about what he decides to show (in true Jurassic Park fashion in hiding more graphic details). 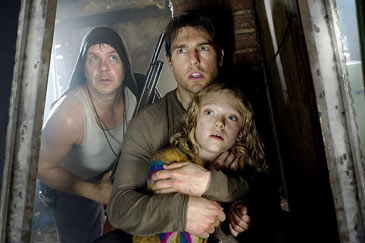 I would definitely stand firmly behind the fact that this is NOT a film for children. Too many sequences are filled with tense family moments, violence, and terror for the younger ones. Dakota Fanning's character Rachel even stumbles upon a river carrying floating dead bodies that makes for a more disturbing moment. Spielberg definitely opted for a more horror-based alien film this time around.

Overall, I was disappointed with Steven Spielberg's version of the War Of The Worlds story. The action and special effects are first-rate, but the characters left a great deal to be desired. Perhaps if we liked them more or the situations felt less forced, the outcome would have been stronger. A standard, stock Hollywood ending made for a bittersweet finish as well. It should have and could have been a lot stronger of a film--the kind you'd want to sit and rewatch every Halloween. This War Of The Worlds update is still an exciting and entertaining thriller, but don't go in expecting too much. You'll probably be better off renting the 1953 classic instead.


The 4K UHD combo pack of War of the Worlds includes the feature film in stunning 4K UHD, the standard Blu-Ray disc and a digital copy. There are NO bonus features on the 4K disc (and there are no iTunes Extras), but there are a bunch of extras on the Blu-Ray disc (most likely from its original Blu-Ray debut).

War of the Worlds in 4K UHD - I've seen the film a few times since first watching it in the theater in 2005 and reviewing it. I still have mixed feelings about it. My initial feeling about Ray and the constant conflict with his family is still a major downer for the film, and Justin Chatwin's character Robbie gets more irritating with each viewing. His constant bickering with Ray is annoying and his persistent need to join the fight against the aliens wears thin really fast. Still, my favorite moment is when the first alien ship tears out of the ground, and scenes like the ferry boat and hiding in the basement of Ogilvy's house while the aliens investigate are still great sequences. Overall, though, it's a movie that I can't help but feel as though it could have been great, but is held back by avoidable things.

I'll never forget rewatching the movie on DVD a few years ago. It was by far one of the worst DVD transfers I've ever seen. The picture looked as if you're trying to watching a standard definition movie streaming it on a poor Internet connection--but this was on a disc. I later watched an HD streaming copy and it was considerably better. So how does it look on a 4K UHD disc with HDR? Pretty dang good. However, the grainy look of Spielberg's original film really shows through with this crisper presentation. As expected, the color is more vibrant than ever before, and close-up shots are sharp and high in contrast. However, the digital effects don't always mesh as well with the movie since it's smoother than the grain of the live action material shot on film, but in the end, War of the Worlds still has never looked better. If you're a fan of the movie, this is still the best way to watch it.

Blood/Gore: When the alien beams fire from their ships, it vaporizes people immediately, leaving only their clothes. There is no blood or gore, however, because the people just disappear into dust; Ray has varying amounts of blood on his face/head throughout the film; Rachel watches as a group of dead bodies float down a river (neither bloody nor gory however); We see a swarm of people attacking a van. The windshield has a hole in it and we see a man desperately trying to rip it open (with some blood appearing on the glass from it cutting his hands); Robbie has some blood running from his nose after being punched; Ogilvy has some cuts on his face; We see a tentacle drop a man behind a truck (we see the legs protruding out) and then a large probe with a blade on one end impale the person out of our view behind the truck. We then see the probe fill up with blood; We see some unidentified orange liquid poor out of an alien ship

Violence: Many people are vaporized; Some people attack a van and its passengers and a man is shot to death; We see a brief segment involving the U.S. Army fighting the alien ships; A man enters a room with another man, closes the door and presumably kills the man; Aliens torture and kill some people, etc... Disclaimer: All reviews are based solely on the opinions of the reviewer. Most reviews are rated on how the reviewer enjoyed the film overall, not exclusively on content. However, if the content really affects the reviewer's opinion and experience of the film, it will definitely affect the reviewer's overall rating.