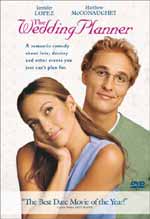 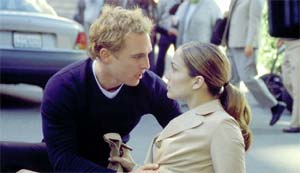 A wedding planner raised in an all Italian family has their life changed completely around when she gains a client that could catapult her career. A freak accident one day leads her to meeting a doctor who seems to be the man of her dreams, but all goes awry when she finds out he is actually the fiance' of the big wedding she is planning.

*Sigh* Another movie panned by critics. Plot "too contrived," characters not solid enough, blah blah blah. Picky Picky. I don't see why the crudest, most foul dramas get such praise, while light hearted comedies get dumped on. Make sense? Not to me. At least, while I tend to try to understand their stubborn, bloated pickiness, I find their reasons weak and overly stuffed than anything. In other words, I guess I can honestly say I liked this movie and am tired of decent, fun comedies being given the executionary treatment due to not enough complexity. I think there's room for no-brainer fun flicks. The Wedding Planner is really as such, I suppose. It's a feel-good romantic comedy with a good cast but without an exceptional plot. Does it need one? For heaven sakes, no. Was it good. For Pete's sake, yes. Fabulous, not really, but good.

Lopez and McConaughey delivered their characters in such a way that you couldn't help but like them no matter what they did, and they stole the spotlight in each scene. You wanted to see them together, and you were pleased whenever they shared screentime. Content placed the film adequately under the PG-13 label, however, 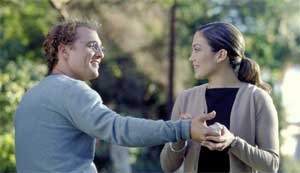 with the removal of a few words and the editing of about 2 lines and 1 scene, the film could have easily been a wonderful family film (Hello?! You've Got Mail was PG, no?). Sexual references only exist in about 2 or 3 minor occurances. *Spoiler alert for following description!* 1 comical scene consists of Mary and Steve knocking a statue over that shows full-frontal male nudity. In the process, the statues genitals break off, and they try to glue it back on. In this rather funny scene, Steve tries to hold the piece back on the statue as the glue dries, making it look like he's inappropriately 'touching' the statue. As a result, the piece sticks to his hand and Mary later tries to remove it. Although not real explicit or overly offensive, some may still find it offensive and inappropriate.

Language consisted of 1 "f" word muttered amongst background noise by Mary's assistant, along with the "s" word (which was possibly used once later in the film). Otherwise, the language existed in the form of a few other colorful phrases... Story-wise, the film was interesting. It had it's cute moments, it's funny moments, and it's sad moments, but was not completey riddled with offensive material like unfortunately most comedies as of late. However, with just a bit of content editing, I can't help but see this film being better.

In summary, I liked this movie, but still found what little offensive material still unnecessary and easily avoidable. A good date flick, The Wedding Planner is a fun, simple romantic comedy without the constant frustrating tear-jerker sensibilities as such films like Notting Hill. With content in mind and non-exceptional story as well, I still award this cute flick 3 and a half stars. If you have any questions or comments about the film before you see it feel free to contact me.

Sex/Nudity: Some minor comments/references are made. 1 comical scene consists of Mary and Steve knocking a statue over that shows full-frontal male nudity. In the process, the statue's genitals break off, and they try to glue it back on. In this rather funny scene, Steve tries to hold the piece back on the statue as the glue dries, making it look like he's inappropriately 'touching' the statue. As a result, the piece sticks to his hand and Mary later tries to remove it. (the piece looks clearly like what it is supposed to be, but isn't intricately detailed or anything extremely explicit)

Alcohol/Drugs: Several people have drinks throughout the film. Mary gets really drunk in one scene.

Violence: Nothing really worth mentioning (a car bumps a dumpster that rolls down the street towards Mary; Massimo wrestles Steve; people break plates at a wedding) Disclaimer: All reviews are based solely on the opinions of the reviewer. Most reviews are rated on how the reviewer enjoyed the film overall, not exclusively on content. However, if the content really affects the reviewer's opinion and experience of the film, it will definitely affect the reviewer's overall rating.