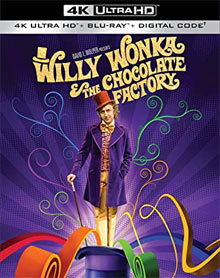 A poor but hopeful boy seeks one of the five coveted golden tickets that will send him on a tour of Willy Wonka's mysterious chocolate factory. (from IMDb)

In the 50 years since its release, Willy Wonka & the Chocolate Factory has become a classic - one beloved by movie lovers of all ages. I myself remember seeing it as a kid and marveling at the colorful and wacky visuals. And of course, all the kids hoped they'd be more like Charlie, and NOT like any of the other spoiled children - Veruca Salt, Mike Teevee, Violet Beauregarde, and Augustus Gloop. 2005 saw an unnecessary remake hit the big screen under the direct book's original title, Charlie and the Chocolate Factory, with Johnny Depp filling the top hat of Willy Wonka. Thanks to a creepy performance from Depp and Tim Burton's usual twisted creative mind, the movie may have had its moments, but ultimately felt over-the-top and charmless. 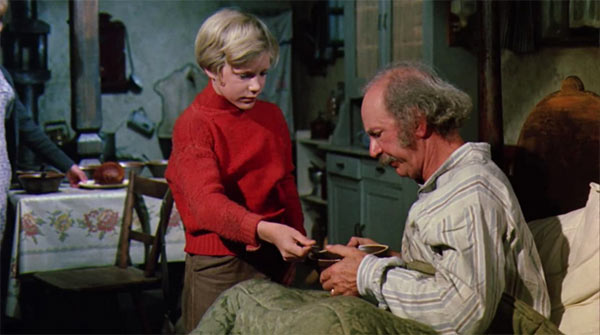 Revisiting the 1971 adaptation, Willy Wonka & the Chocolate Factory, in its new 4K UHD presentation, I was really captivated by Gene Wilder's often subtle but entirely charming performance as the title character. He surprisingly does not make an appearance in the film until nearly halfway through, and when the kids are finally welcomed into Willy's mysterious chocolate factory, it's only then that the movie truly comes alive. I forgot how slow and slightly tedious the first 30 minutes or so are, but director Mel Stuart uses this time to introduce us to Charlie and his family and work the Bucket family into our hearts. It's easy to like the selfless Charlie and his bizarre family, and Stuart does a splendid job making us care about them. On the other hand, the colorful and moderately depraved other children that make up the 5 winners who get a tour of Willy Wonka's factory are portayed in a way that makes it easy for the viewers when we see them get what they deserve. Thematically, the story is as relevant as ever in 2021. Many people today are blessed with such excess, or spotlights awarded through social media success, so much so that the spoiled children in the story are anything but difficult to spot in the real world around us. The movie does make a big statement about the poor over the priveleged and what it means to feel entitled, but we live in a world where entitlement is practically a religion for some people, and the technological advancements in our lives have only complicated this further. (2 Corinthians 9:6-7 is a nice reminder that "Whoever sows sparingly will also reap sparingly, and whoever sows generously will also reap generously," and Charlie's sacrifices for his family are a great illustration of this.) With that said, human nature alone is to blame for much of the selfishness around us, and Charlie becomes a sort of hero here, championing humility and gratitude when so many of us seem to be discontent no matter what blessings come our way. Charlie isn't a perfect character, which makes the sweet finale more hopeful to the rest of us wildly imperfect people. 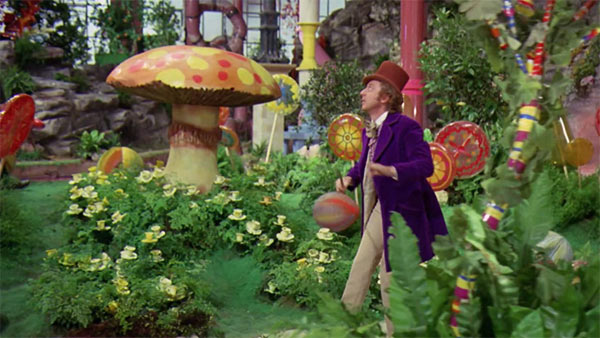 The imaginative visuals and creative concepts in Willy Wonka & the Chocolate Factory have hardly dwindled in the 5 decades since its release. The 4K UHD presentation is crisp, clear and vibrant, and the colorful scenes really pop (Seriously - the clarity and color in those bubbles alone!). While the picture doesn't seem nearly as clear at times as you might expect it to in this format, it's still quite good, and the best transfer of this movie to date. I love how much life is brought out by this refreshed transfer. The scenes before Charlie makes it to Willy Wonka's factory is mostly muted tones and drab colors, but it's a colorful feast for the eyes once Wilder's Wonka shows up. This movie is a classic for good reason, and I think this presentation only improves upon the film's overall quality.

The content of the movie is pretty tame, with a couple surprising exceptions. Yes, the spoiled brats in the movie indeed get their comeuppance, but Wonka insists that each of them will end up being fine (although, for some, that's really hard to believe). One of the kids falls in a river of chocolate and gets sucked up a tube. Another child chews a piece of gum that causes them to blow up like a giant blueberry (and Willy says they will need to be "juiced" if they want to return to their original shape). Another child falls down a trap door leading to the incinerator for being a "bad egg" (that's an understatement), but it sounds as though they would be rescued before harm might come to them. The last child is shrunken to the size of an action figure, and Willy's suggestion is to put the kid in a taffy pulling machine (yikes!). That's really the extent of the movie's violent content, but one scene that I was surprised by, that I really didn't remember, takes place when they're sailing down the chocolate river in a boat. They stop at one point and pyschedelic imagery flashes on the walls around them as Willy is entranced by the experience and spouts poetic jargon about their journey. Some of the images are disturbing, like what seemed to be a worm moving across a person's face, the close up of a crab or insect's mouth (or other bugs), and other quick clips of unsettling images (like an iguana eating a frog). I'm honestly not sure what the scene is meant to illustrate, but it's well worth fast-forwarding through. 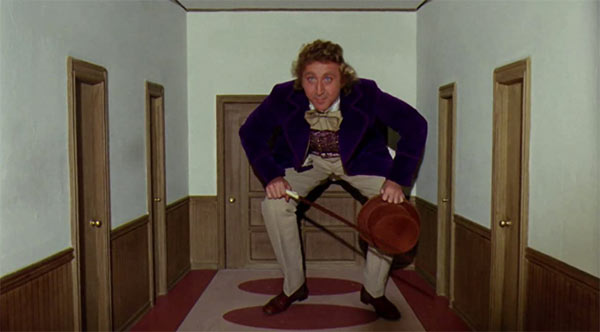 Overall, Willy Wonka & the Chocolate Factory makes a lovely debut in the 4K UHD format. It's revitalized in 4K and given new life. It's also just as thematically relevant today as it was 50 years ago, and a nice reminder of how far selflessness, kindness, and doing the right thing can go.

Alcohol/Drugs: There's talk of "butter scotch" and "butter gin," to which Willy says "Candy is dandy, but liquor is quicker."

Blood/Gore: We see a man with an ugly scar on his cheek in several scenes; We see a creepy boat ride with quick flashes of images like a worm crawling across a person's face, an iguana eating a frog, maybe a chicken getting its head cut off with a cleaver, and other creepy things.

Violence: A creepy guy with a cart covered with cleavers, called the "Tinkerer," tells Charlie no one ever comes out of Wonka's factory; In class, the teacher mixes chemicals, with Charlie's help, that cause a burst of smoke; We see a man with an ugly scar on his cheek in several scenes; Grandpa Joe stands up and falls backward onto the bed. He then falls forward onto Charlie. Then again against the wall, and then nearly collapses straight to the floor (but Charlie catches him). While singing, he stumbles around the house; A boy falls into a chocolate river and gets sucked up a pipe and stuck inside it; We see a creepy boat ride with quick flashes of images like a worm crawling across a person's face, an iguana eating a frog, maybe a chicken getting its head cut off with a cleaver, and other creepy things; Exploding candy knocks a kid backward; A girl blows up like a blueberry and is rolled out of the room to be "juiced"; After drinking some fizzy soda, two characters float up toward the ceiling and nearly hit a spinning fan (they are terrified as they get closer to it), but they end up going back down out of harm's way; A girl trashes a room, turning things over and kicking things. She then falls down a garbage chute; A child is shrunken down and Willy tells his team to take him to the taffy-pulling station; An elevator crashes out of the top of a building and into the sky. Disclaimer: All reviews are based solely on the opinions of the reviewer. Most reviews are rated on how the reviewer enjoyed the film overall, not exclusively on content. However, if the content really affects the reviewer's opinion and experience of the film, it will definitely affect the reviewer's overall rating.