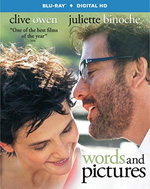 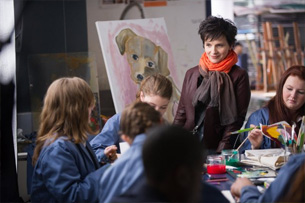 A flamboyant English teacher (Clive Owen) and a new, stoic art teacher (Juliette Binoche) collide at an upscale prep school. A high-spirited courtship begins and she finds herself enjoying the battle. Another battle they begin has the students trying to prove which is more powerful, the word or the picture. But the true war is against their own demons, as two troubled souls struggle for connection. (from MovieWeb.com)

This digital age we currently live in is a funny one for sure. Chat rooms and text messaging have made the need for shorthand a necessity in our rat-racing lives. We "Tweet" in 140 characters our thoughts and musings, and snap photos on Instagram of anything that finds its way in front of our phone's camera lens. The cheapening of art is everywhere, and our communication, while transmitted in different, unique forms these days, has gotten more inane and vapid. That's what makes a film like Words and Pictures so refreshing. It focuses on the lives of two forty-something teachers who have a deep love for two different art forms and are struggling with either modern technology and the dulling of their passion because of it, or with their own personal ailments and/or demons. Jack Marcus is a divorced father of one adult child with a severe drinking problem who has a hard time coping with his life and how degrading the appreciation of words has become in the American culture. He's jaded and has lost his ability to write creatively like he used to. Things change drastically for Jack, however, when his job as an honors english teacher is on the line because of his behavior. He also meets Dina Delsanto, an art teacher new to his school who is trying to rediscover her passion for art while dealing with a personal ailment in the form of the debilitating rheumatoid arthritis. Jack and Dina share many of the same students at this elite school, and when Dina tells her class that words are "lies" and "traps," it fires up Jack to want to prove her wrong in a battle of words versus pictures. 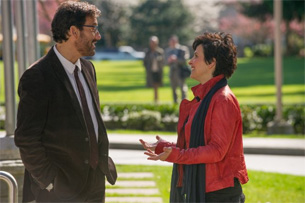 A film like this is only as successful as its script and players, and teaming Clive Owen with Juliette Binoche is an inspired match. Owen immerses himself in the role so completely that you really believe his character and his passion for literature and words. It just rolls off of him so naturally. He frequently tries to play word games with the other faculty (much to their discontent), and feels as though he's met his match in the feisty and oft cranky Dina. On the other hand, the art teacher has a love/hate response to Jack's pesterings, but feels driven to better her own craft in response to the way he acts toward her. We, the viewer, are made privvy to a few of their classes, lectures, and advice to their students, and anyone who's an artist--be it writing or visual artwork--will easily be drawn in by the characters and story. At one point, as Jack presents to his students an argument in favor of the inherent power of words over that in pictures, he recites a portion of a speech from this country's founding fathers and his emphasis on the power of words is illuminating. And when he insists the students research topics in a physical encyclopedia as opposed to using a phone's web browser, he presents the case that, while flipping through the pages of such an insightful book, readers may stumble upon people, places and things they may have never otherwise found, and therefore really learn something unexpected. I found this to be an inspiring revelation for how Christians have shelved their paper-bound Bibles in favor of more convenient apps on their phones. It makes finding answers we seek spontaneously much less likely.

There's a surprising amount of layers to unpack while watching Words and Pictures. To be honest, when I watch a movie or TV show in my own home, I find it easy to be doing something else while the program is playing (usually, for me, it's drawing in some form). Words and Pictures felt far more engrossing than an exciting action film and I found myself with my eyes glued to the screen. There's a great deal of passion that oozes not only from the main characters, but from the film itself. It's infectious and nearly tangible. While Jack battles a drinking problem he hardly will own up to, Dina is desperately trying to adjust her life to include her struggle with rheumatoid arthritis, including re-learning how to create art in her own way. Dina is clearly trying to come to grips with her own frailty while trying to push her students to be the very best versions of themselves as art-makers, and it's difficult to not sympathize with her through the struggle. The film even lightly touches on the lives of some of these teachers' students, with one of them being bullied by another student (and the ramifications of it from both perspectives). Overall, as someone who writes a lot here on this site and draws in my "spare" time as well, the topics in the movie spoke volumes. There's even a moment near the end of the film where a character writes in an email something like "enough words and pictures..." and sends the recipient a beautiful piece of music to represent their own feelings; it adds yet another layer to art expression in a profound way, helping to broaden artistic communication to include not only words and pictures, but music as well. 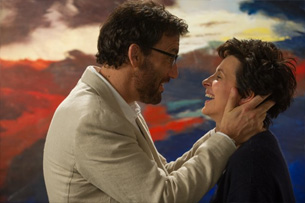 The content of the film is very much PG-13, unfortunately. For a movie focusing so much on the importance and depth of words, and with Jack quickly scolding a student for asking a simple question in such a dull way, there's a surprising amount of profanity use here. A few scenes early on dance around possible uses of the "F" word, and then Jack mumbles it twice during one drunken phone call. There's a handful of other profanity use, including some blasphemy and uses of the "S" word. Some of the abstract paintings shown in the movie are a little sensual, but not very graphic. However, two instances do show cartoons drawn by an unruly student that offensively portray characters in the film with bare breasts (in the intent of offending). Also, the main characters sleep together and discuss it a few times (although not too graphically), and we see them together in bed after the fact once. Finally, if you're sensitive to the topic of alcoholism and how it can really affect a person, this is a really big theme in the movie. Jack does eventually seek help (and we briefly see him in an AA meeting), but the road leading up to it may be a difficult one to watch for some viewers.

When all is said and done, Words and Pictures is a wonderful indie film that celebrates the power of words--written and spoken--and art in general. It also shows them from a romantic perspective, creating an adult romantic story here. It's very much not intended for younger teen audiences or people who prefer action and comedy, but any wordsmith or romantic who's also a sincere lover of the arts will probably be swept away by Words and Pictures.


Words and Pictures is available on all digital retailers and comes as a single-disc DVD or single-disc Blu-Ray with digital copies for each. The Blu-Ray looks beautiful and is especially ideal for being able to appreciate the artistic nature of the movie. Along with a feature-length film commentary is one lone featurette about the making of the movie.

Behind the Scenes of Words and Pictures (17:46) - Although it's the one, single featurette on the disc, this is a very thorough behind the scenes look into the making of the film and it gives viewers insights into casting, production, the writing (and how the script had been floating around Hollywood for almost a decade before being picked up), the actors' craft and more. We hear from the cast and crew, and also learn that Juliette Binoche paints as a hobby, so she did her own work for the film. It's a really insightful look into the movie's production which adds to the appreciation of it.

Sex/Nudity: When Dina talks to the class about making viewers feel their art in their chest, Swint makes cup shapes with his hands in front of his chest to symbolize breasts; While talking to Jack, Elspeth makes a subtle reference to the two of them having a mistake fling in the past. Jack then says something about getting "laid a lot back then;" Jack tells a woman at work that "avocado" is an Aztec word for "testicle;" Dina lists sex among things people need while arguing about the importance of words and pictures with Jack; Swint flirts with Em and tells her he'll show her a good time, and she says he did with another girl and bragged about it to the whole school. He responds that the girl did too; We see a cartoon of Em with a sword and nipples showing and a distorted crotch area where her legs are spread in a jumping position. It's not realistic looking, but her breasts are clearly bare in it. We see this again later; We see another offensive bare-breasted cartoon, this time of Dina, but she just laughs about it; Elspeth mentions, again, the affair she had with Jack and is concerned he'll use it against her to save his job; Jack jokes about being in Playboy--since he's a writer--and then adds "as miss January" to make the female company drinking with him at the bar laugh; Jack and Dina discuss sleeping together and he says he had a vasectomy and is very clean. She says it's been a while since she's been with anyone and mentions having previously lived with a guy for 6 years. They kiss and it cuts to them in bed after the act (with the sheets pulled up to their shoulders). She says she wants to do it again and he tells her he has to wait, so they joke about it. We then see them outside talking about what just happened and she says, "for a guy who just got laid, you look pretty forlorn;" When students are announcing words they made up, one says "Textulating: making love via texting;" Jack tries to play his word game with Dina again and she says, "'Masturbationalistic,' play with yourself" as a double meaning about the game and simultaneously telling him off.

Blood/Gore: Jack angrily punches an empty bottle of vodka in his trash can and cuts his hand. We see blood on his hand and in the trash briefly.