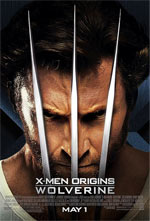 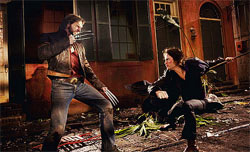 Using several resources that include the Marvel Comics lore, along with the more recent Weapon X graphic novels by Frank Miller, "Wolverine" mixes action with an origin story about how Logan emerged from a barbaric experiment as an indestructible mutant with retractable razor-sharp claws... (from MovieWeb.com)

It's no surprise that after the success of the X-Men trilogy that a prequel movie would be made centered around the most popular of the X-Men, Wolverine. It's the role that really launched Hugh Jackman's career, so the real treat about X-Men Origins: Wolverine is getting to see him in the role again. Jackman's a great leading man and a fine actor, but sometimes he falls victim to mediocre writing and storytelling, and sadly - X-Men Origins: Wolverine is riddled with those kinds of problems. 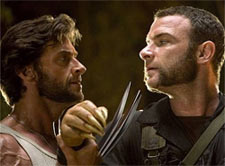 Right off the bat, to stress the fact that this film is also probably the most violent of any of the previous X-Men films is most likely understood, but it's important to make it clear that Wolverine is the most adult of any of the X-Men flicks. From featuring more language than the previous installments to showing more of Hugh Jackman's body than any of us really ever wanted to see, to keeping the action (and violence) coming almost nonstop, Wolverine actually pushes the PG-13 rating envelope a bit too much. I suppose comic book fans can argue that an R-rating would be the only way to keep true to telling the story of Wolverine "right" (at least in their minds), but being more sensitive about the material for a wider audience is not only smart but ideal. Still, keeping the movie as edgy as it is may still limit its accessibility.

X2: X-Men United (like Spider-Man 2) is widely believed to be the best of the X-Men trilogy and there's a good reason for that. Director Bryan Singer has a knack for storytelling, character developing, and working in just enough action and decent special effects to keep it all entertaining and interesting. Sadly, dramatic director Gavin Hood doesn't even handle the more dramatic sequences of Wolverine to their greatest potential. Singer gave X2 plenty of room to breathe and tell its story in two hours and fifteen minutes, while Wolverine seems to try too hard to fit in just enough story to string a series of action sequences along within an hour and forty five minute window. Hood almost makes as many mistakes as Stephen Sommers did with Jackman's monster vehicle, Van Helsing, where nonstop mindless action and eye candy were favored over story and character. So what made the first two X-Men films so great? Or even last year's The Dark Knight? Story, direction, and characters. Singer painted a more realistic picture of mutants living in the existing world as we know it, while Hood seems to have treated it as if Wolverine existed in a completely alternate reality to the real world. It's more like a live action cartoon for adults. Part of this is probably due to the fact that Hood used lots of CG effects and green screen which seems more often obvious than not. When it all comes down to it, X-Men Origins: Wolverine feels too different than the films it's created to be leading up to. 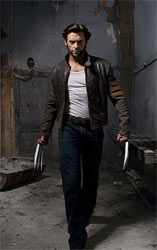 The best part about X-Men Origins: Wolverine is Jackman returning as the title character. Liev Schreiber is good as Sabretooth, but it's strange to see such a difference between this film's take on the character and the 2000 X-Men version (with no explanation here as to how he comes to look like he does in the first X movie). Hood and company do work in some little tidbits for the fans -- from seeing Logan get his signature leather jacket we see him wear in the first X-Men movie to us meeting Cyclops for the first time (and even at least one other contrived but still fun little surprise cameo towards the end), there are plenty of entertaining and fun moments during Wolverine to be worth most fans' time. However, a mediocre feel is washed over the whole of the film. The first misstep happens early on as the intro of the movie shows Wolverine as a little kid. We get to see when he first discovers his claws, so when he does the typical throw-your-head-back-with-your-arms-out-and-scream-at-the-sky move, you'll either laugh or groan at how painfully cheesy it is. Later, Jackman howls like an animal as Wolverine in a similar fashion which just spawned laughs from the audience during a moment that was intended to be serious. It's stuff like this (including an overlong and goofy scene with The Blob) that detracts from X-Men Origins: Wolverine. Finally, viewers are likely to be left with more questions than answers by the story's end. For example, we're introduced to the Wolverine character as James Howlett, which is the first time I (as someone who has not followed the comic book lore of the character) had ever heard his name was anything other than "Logan." Later, Stryker just out of the blue starts calling him "Logan" and we're never given an explanation as to why. Did he choose this name as a cover for a new life? Was it given to him? While comic fans probably know (and I can also find through a quick wikipedia search), a movie like X-Men Origins: Wolverine should really have more clearly explained this to its audience.

Overall, X-Men Origins: Wolverine is a decent effort but significantly falls short of greatness. Characters get introduced and dismissed seemingly too quickly, while other story directions seem to conclude just as prematurely. The movie is violent enough to warrant exercising caution, while language (including a surprising amount of blasphemy for a superhero film) is also a hindrance. X-Men Origins: Wolverine isn't a waste by all means, but it's far from the movie it could have been and certainly won't be remembered as one of the better superhero films. Perhaps if they explore the Wolverine story further, a more suitable director and better writers could be enlisted to create for fans a much stronger superhero flick.

Sex/Nudity: We see Logan lying in a water tank naked (we barely see his bare side, no visible nudity). However, when we gets out of the tank, we see all of his torso to right about his hip, and then see the top of his bare butt as he jumps out. Later, we see him fully nude running (but we don't see his genitals) and jumping into a waterfall. After that we see his bare butt as he sprints across a field, and then see him kneeling naked in a corner with no visible explicit nudity; We see a woman with just a man's shirt wrapped around her; We see her again in a white dress/nightgown that conforms to her figure and shows some cleavage (she then straddles Logan as they talk and kiss); There's also an ambiguous scene early on where, during a WWII sequence, Victor tosses a civilian woman into a room, but is stopped by Logan. It seems to imply he was going to possibly rape or take advantage of her, but it is never clarified.

Alcohol/Drugs: We see Logan and other characters drinking at different times. Logan has a cigar in at least one scene.

Blood/Gore: We see a decapitated wolf's head on the ground with some blood; We see a woman with blood all over her clothes and across her neck; We see a man pouring blood (or fake blood) all over a person; We see the brief close-up of a face that has its mouth sewn closed with string; We briefly see the closeup of a face that looks like it's cut all around the eyes (looks kind of gory); A person has blood on her hand after being wounded; We see bloody cuts on Logan's face that heal up a couple different times; We see cuts across a person's neck and then, as they fall, we see (in the distance) the head separate from the body and spin in the air); We see a man walking down a road and his shoes are worn out on the front (and look slightly bloody); A person in a helicopter cockpit have some blood on their face after it crashes; *Spoiler (after the credits): We later see the decapitated head close-up (not gory), but apart from the body, and when a hand crawls over to touch it, its eyes and mouth open

Violence: (Some spoilers may be included here!!) The film opens where a man is killed and a young Wolverine first grows his claws and runs them into another man, killing him; We then see a montage of a couple different wars that Victor and Logan served in, with various non-bloody violence; Victor and Logan are shot in a firing squad but survive; An extended action sequence shows Wade reflecting bullets back at the shooters, killing them. Another sequence shows some people being roughed up and killed, but Logan gets fed up with what the "special team" is doing and leaves; We find out that some mutants are being killed off by someone; A person is found dead covered in blood; Logan is put through a procedure where metal is fused to his skeleton, so we see many needles sticking into his skin, He then breaks out and escapes; We see Logan and Victor fight (he elbows Gambit in the face), and then Logan and Gambit later fight; Victor stabs a man in the chest (and he says he can feel their spine); Logan fights the Blob in a boxing match (and threatens him to give him information); We see a decapitated animal head; Two innocent bystanders are gunned down; A helicopter crashes and someone ignites leaking fuel that causes it to explode, killing people inside; A house is blown up by missiles; Cyclops' uses his vision to take out a couple bad guys; Logan and Victor fight a brutal battle; A man threatens to kill a woman by putting his hand on her throat; A big fight between three characters yields one of them being decapitated, which leads to the collapse of a power plant funnel; A man is shot in the head several times (no blood) and then again at close range (which we see further away); and other comic book style violence... Disclaimer: All reviews are based solely on the opinions of the reviewer. Most reviews are rated on how the reviewer enjoyed the film overall, not exclusively on content. However, if the content really affects the reviewer's opinion and experience of the film, it will definitely affect the reviewer's overall rating.