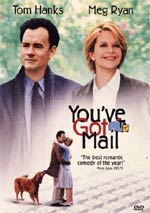 Joe Fox (Tom Hanks) is heir to a big book superstore chain. He lives with his girlfriend, Patricia who he doesn't even really love, and at night chats online with a woman he's never met and knows nothing about, but soon falls in love with. That woman happens to be Kathleen Kelley, the owner of a small children's' bookstore that has been around for 40 years and was started by her late mother. Joe's store is serious competition for Kathleen's. Before long, Joe & Kathleen are at war with each other. Unknowingly, however, they are chatting online with each other and falling in love in the process. As this crazy story unfolds, the mystery in this romantic comedy lies within when and how they will learn of each other's identity.

You've Got Mail is easily the best romantic comedy to come out of Hollywood this year. Director Nora Ephron takes the 1940 Jimmy Stewart classic Shop Around The Corner and updates it nicely for the late nineties. Ephron makes Mail funny without being crude, and creates characters that are not only tangible, but likable. The film thankfully shies away from sexual innuendos (save a minor and unnecessary joke about cybersex), which is uncommon for most romantic comedies these days, and serves as a fun, adult romantic comedy. The film does, unfortunately, show two central relationships involving couples who live together without being married with the two main characters secretly beginning in a relationship together online. The love story and comedic aspects of the film are its real charm, but there are plenty of moral downsides to keep this from being a true family film. The battles of wit between Hanks and Ryan, coupled with a budding romance between the two, make this film especially fun to watch.

The movie seemed a little long at times, especially for a film of this genre, but the suspense of how the two will find out each other's true identities holds the viewer's interest throughout the film. Overall, I thought You've Got Mail was a sweet little film, but due to some language and some significant moral issues, it just doesn't have the innocence factor the original it's based from possessed.

If you're looking for a little romantic comedy to curl up with your spouse to watch on a rainy night, You've Got Mail might be a good choice, but definitely check out Shop Around The Corner for you and your family.

Sex/Nudity: A few minor comments are made about "cybersex," and Joe & Kathleen both live with other people, unmarried. A comment is made about Joe's future stepmom running off with the nanny.