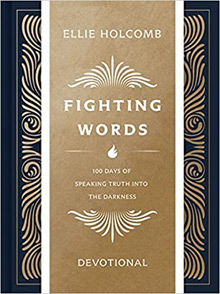 Ellie Holcomb has had a big year. Earlier, she released her third full-length studio album, Canyon, and now comes the release of her latest book, Fighting Words Devotional: 100 Days of Speaking Truth into the Darkness. Partly taking inspiration from her own songs, mostly taking inspiration from Bible verses she's memorized with friends, this devotional seeks to bring encouragement to continually seek God in daily life. Each day is a short read with a verse, some thoughts, questions for the reader, and even a pre-written prayer for those who don't know quite what to say.

From the outset, it's stated that this book is specifically for women. In particular, mothers will find a close connection with Holcomb's experience. She tries to make each entry feel like a little conversation that could happen in her kitchen and for the most part strikes that tone well. This book is laid-back and easy-going, with each day's reading never feeling too long that one couldn't slide it in first thing in the morning or in between tasks. Holcomb's motherly heart is quite evident throughout and that lends itself to the encouraging tone. She also has a knack for coming up with a thoughtful illustration that complements the day's verse/message nicely. For instance, in one entry, Holcomb makes the case that darkness must give way before light, using a flashlight to prove her point. It's an effective picture that carries on well after leaving that day behind.

While there may be moments where Holcomb gets a little theological or provides some commentary on the Scripture she's highlighting, most of this is surface level at best. On one hand, with basic encouragement being the goal, the lighter touch in dwelling on these passages makes sense. On the other, the lack of depth can be felt as the days start to run together and the upbeat, positive words melt into the same refrain being repeated over and over. Perhaps going with 50 days instead of 100 would have lessened this feeling. Granted, this is a book written for stressed-out women and frazzled mothers, so there's only so much one can mentally handle when stressed-out or frazzled, but simply skimming the surface level meaning of the Bible does the Word (and its students) a disservice.

That critique aside, Ellie Holcomb's Fighting Words Devotional is a nicely put together package. From the intricate design of the dust jacket to little flourishes inside with spaces for writing thoughts, genuine care was put into the publishing of this book. The lack of depth may frustrate some, while for others it may be exactly what they need. Fans of Holcomb's music will also find another layer of appreciation as she frequently connects some of the verses and their stories back to specific songs. Women in that stressed-out/frazzled stage of life, who are struggling to keep up their relationship with Christ should find Fighting Words a helpful resource and perhaps a springboard into more of the depths of God's heart.