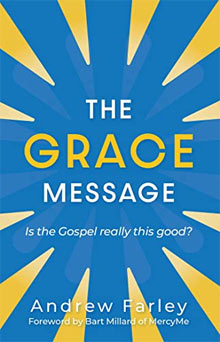 Andrew Farley
The Grace Message: Is the Gospel Really This Good?

Some pastors wrap their whole ministry around one particular message. For Texas pastor Andrew Farley, his has been "the grace message." His church is called The Grace Church; he founded The Grace Message ministries, hosts a radio program called "The Grace Message," and now has a new book titled, The Grace Message: Is the Gospel Really This Good? This surprisingly thick volume tackles various questions and applications regarding the doctrine of grace, with interactions with church members, listeners, and conference goers to serve as a springboard for each chapter. The book essentially seeks to clear up misconceptions about grace and focus in on what the Bible really says.

Farley hits the grace note hard, like a punk rocker pounding out a power chord. He starts off by clearing the air regarding the Old Testament Law. He clears it by grabbing the Law by the collar and defenestrating it out the nearest window. Christians are freed from the Law, therefore none of it applies to us, not even the Ten Commandments. After taking care of the Old Testament, Farley even goes after some of Jesus' teaching in the Sermon on the Mount. His argument is that Jesus' teaching was under the Law and given to other people under the Law. Therefore, it doesn't apply to Christians.

While his point makes sense, it does come off a little flippant and doesn't really take into account what we're to do with the rest of Jesus' teaching. After all, if the disciples' teaching is based off of Jesus', then how much of their writing applies to us? I'm sure Farley doesn't mean to discount Jesus' teaching, and this point only covers the first couple parts of the book, but it does lack nuance. (For what it's worth, Paul uses the Law to make a point about paying ministers in 1 Corinthians 9:9-10. So while Christians may not be under the Law, there are still principles we can learn from it.)

After dismantling evangelicalism's weird relationship to the Law, Farley hones in on the message of grace, what it means, and how it applies to believers. He does this (as mentioned above) by recounting previous interactions that brought up a variety of questions. He delivers some points that are worthy of consideration: if God has already forgiven us for sins past, present, and future, why do we keep asking for forgiveness? If we have new hearts already, why do we keep telling ourselves we're still wicked? Is our "flesh" and sin an actual part of us or merely an outside influence? Farley, to his credit, covers all these questions with plenty of Scripture.

Though this is all delivered in an easy tone and style, and packaged like a simple "Christian living" book, one finds it's actually a theological treatise on grace and all its implications that challenge certain conventional thinking among American Christians. While Farley is thorough to a certain degree, like his dealing with the Law, there isn't much nuance. Good theology has tension in it. The message Farley gives has tension that he mostly tries to dispel. It's not that he's being unorthodox (I found myself agreeing with most of the book), he's simply skimming the surface and trying to make the message as simple as possible without getting into the weeds. On one hand, there's nothing wrong with that approach. On the other, it's not very satisfying.

In the end, those wanting an easy-to-read book on grace, forgiveness, the New Covenant, and more will find The Grace Message very approachable. It's over 200 pages of Farley trying to open up to the reader every corner of the house of grace. The result is a tour that feels a little long in the end and perhaps not as satisfying as some things get glossed over to move to the next point in the topic. The challenges it does raise, however, make it worth a read (and possibly a re-read). Just come ready to engage with Farley in the conversation and seek out some answers for yourself from the Bible.