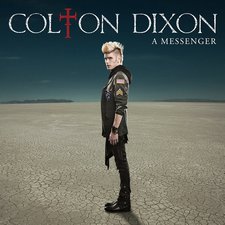 It's hard to believe the show that cranked out pop stars like Kelly Clarkson, Carrie Underwood, and Chris Daughtry has been around for over a decade now. American Idol has been one of the nation's top television shows since its inception, and it continues to discover and develop new talent that America gets to vote for at the start of every New Year. Along with crafting some of mainstream music's biggest success stories, Idol has also contributed to the discovery of several CCM-related artists. One of the latest contestants to venture into the world of Christian music is season eleven's own Colton Dixon. Colton was originally introduced to us in season ten, but failed to make it to the live rounds. He came back this past season, and was successful in making it to the top seven, with high acclaim from the judges and was also a fan favorite among viewers. Dixon was famous for a few things while on the show, such as his "rock and roll" hairstyle, his piano skills, and, ultimately, his heart for God. Colton made it very clear that he intended to pursue Christian pop/rock post-Idol, and after completing the summer's American Idols Live! Tour and signing to Sparrow Records, he is doing just that. After almost a year in the making, Colton's debut, A Messenger, is being unveiled to the world.

Giving fans a taste of what his own music would sound like, Colton performed an original song while on the Idol tour. He then released it as a promotional single, titled "Never Gone," as well as released a primary radio single called "You Are," both of which experienced success on the CCM charts. Citing artists like Switchfoot, Casting Crowns, Daughtry, Paramore, Skillet, and Thirty Seconds to Mars as musical influences, it seemed as if Colton was drawing creativity from an eclectic group of musicians. With his inspirations in mind, and along with his own flair, A Messenger is presented to listeners as a textured album that fans will be sure to eat up, and is truly CCM pop/rock gold.

Kicking off the album is a short intro, which consists of some sirens, hushed voices, and other eerie noises, in an attempt to build up the excitement and suspense for the first track, "Noise." While the intro provides a decent segue into the song, it's almost unnecessary and feels like a "filler" track. "Noise" kicks off the album's music with a fast and aggressive approach, as it tries to set the tone for the rest of the album. It's interesting to note that, while Colton's image seems to be marketed as "edgy" and "rock and roll," at his core, piano-driven music with uplifting lyrics is where he resides. Songs such as "You Are," "Never Gone," and "Rise" showcase that. "Love Has Come" is a straight-up modern worship tune, where Colton sings of redemption and God's love, and how He's everything we're not. "Scars" is one of the highlights of the album, with a stripped-down intro with just his voice and piano; the song builds into a strong chorus and an equally strong message about looking at each day as a fresh start, and that God will take us as we are. Another standout track is "In and Out of Time," which is sonically one of the most distinctive tracks on the album. With a unique and danceable beat, it vaguely reminds me of something that could have found a home on the new Anberlin record. The album bows out with "Let Them See You," which is a heartfelt, piano-driven ballad where Colton's desire for God to be reflected through him and his life is the core subject of the song. It ends with some strings played at the end, and is a tender and poignant finish for the record. The two bonus tracks, "The Shape of Your Love," and "Wake Up," make a nice addition to the track list, with the former continuing the trend of softer tones, and the latter being more of an energetic pop song that could easily find its way on a radio station playlist.

"Technically," this album does no wrong. Dixon's voice is apparently well trained, and fits comfortably within the genre that he's picked. Consequently, all the instruments were well chosen, polished, and perfectly placed all into a nice package that's wrapped tighter than a drumhead. However, one of the issues that A Messenger has is that, except for a few tracks, the album tends to feel like one long song. It's understandable that Dixon wants to establish his "sound," but it seems as if he simply used a paint-by-numbers formula for quite a few of the tracks. Along the same lines, his lyrics, while seemingly genuine, feel trite and cliché at times throughout the album; it's content that's extremely familiar (and redundant) to listeners of Christian pop/rock.

Beyond all of that, A Messenger remains a solid effort. Will it be put down in the books as the best and brightest debut for a new artist? Probably not, but this record should appease his fans from Idol as well as enthusiasts of mainstream CCM music. One of Colton's biggest challenges in his career will be to stand out amongst the masses of young singer/songwriters in the industry. He's had a huge push from Idol, but it'll still take some time and work to establish himself as more than just "That Guy From American Idol With The Hair."