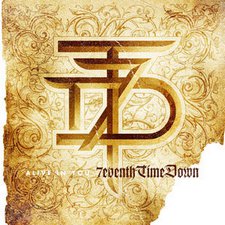 7eventh Time Down
Alive In You

BEC Recordings at one time was home to some great rock acts such as The O.C. Supertones, Project 86, Plankeye, Hangnail, and even Falling Up. Nowadays, it seems as though the better rock bands are on the Tooth and Nail or Solid State rosters. That being said, let's examine the label's newest signing, 7eventh Time Down. The very first issue and detractor I took from this album was the name of the band. No matter how hard I try, I only see "Seveneventh Time Down." The next detractor of their BEC debut, Alive in You is the album itself, which is on par with their sister label mate Since October's latest release.

7TD kick things off well enough to capture our attention. "I Need Someone," the title-track, "Alive in You," and even "What About Tonight" are decent enough radio rock songs, although the ending line of the chorus of "Alive in You" features a Chad Kroeger-esque, Nickelback sounding double repeat of the word You, "I am alive in You (You, You)." Beyond that, the song is solid and even features a pretty nice guitar solo. After these two tracks, however, the album's promise begins to slowly deteriorate.

While "World Changer" has a beautiful message of living a Christ-like lifestyle and changing the world for Jesus, the song itself is my least favorite. However, it does feature a very true line in the bridge that too often Christians neglect and use as an excuse and crutch instead, "One life can change the world." If you don't buy into this, just look at the life of Paul.

Another low point is "Jesus Machine;" the track is a party song that feels like the name of Jesus is thrown into it just because they are a Christian band and "that's what you are supposed to do." The chorus says, "We are the heart of the Jesus machine, I hope you know what that means." While the Christian listeners will obviously get what they mean, they never go any further to explain to a non-believer. They proclaim "faith is so bionic" and "love is like a drug," but beyond those lines, the song is about partying and playing music. The song may have worked better if they had just written a well-meaning party song about having a good time and not half-heartedly thrown Jesus into it.

The attempt to shake things up a bit and throw in some horns on the funk influenced "Love Parade" also falls flat. The music sounds contrived and just doesn't come across with the bravado that appeared to be intented. Finally, "Worship Jesus" is a decent worship song, while "Rusty Nails" is absolutely the diamond in the rough. The best songwriting, lyrically, takes place on this track and this music fits it perfectly. "Rusty Nails" makes a good ending to the ten-track outing.

Overall, the album is at absolute best so-so. While the production is a touch better than the new Ashes Remain album, the songwriting isn't. The issue previously discussed in "Jesus Machine," lines like "I'm like a lovesick puppy chasing you around" in "Love Parade," and the repetitive nature of "Worship Jesus" just don't get the job done in the grand scheme of things. On a side note, with the band's Kentucky roots (can you say bluegrass?), southern accent, and the reference to "roping the moon" ("World Changer"), I have to wonder what 7TD would sound like as a country band.

If you are a fan of bands like Since October, Ashes Remain, or some other "radio friendly" rock bands, you may enjoy 7eventh Time Down. If you want a little more out of your music, you may want to skip this one. While they play the same type of music, 7TD is nowhere near the quality of a Seventh Day Slumber or Kutless; even Decyfer Down provides a better listening experience.