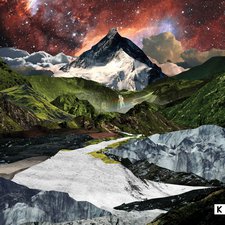 
We were introduced to the uniqueness that is Kings Kaleidoscope only a few short years ago. With some successful EPs and a mind-blowing LP, they've made not merely a good first impression but broke ground and crushed monotony. Riding the same wave of originality, Kings K offers listeners Beyond Control - a journey of depravity, redemption, hope, despair, regeneration and the effect of the gospel on the soul. To say this album is short on quality or content would be a horrid misnomer.

Please Note: I wish I could simply celebrate all of the tracks without the reader giving into the elephant in the room with the pre-dispositional, "What do you think about the band saying the f-word?!" So with that in mind - I will give you some highlights and then focus on the present situation.

If you loved the last album, Beyond Control is a change yet continuation of Becoming Who We Are. The album opens with a luxurious instrumental, "A Resting Place," and quickly transitions to the percussively explosive "Enchanted." The creative instrumentation, the driven rhythm, and eloquent use of background vocals sets the tone of the album. The band has always been extremely fun, but "Most of It" introduces a light-hearted sound that the band hasn't fully explored in the past. If you're looking for a bright sound to match a jovial day, this song can be a part of your soundtrack.

"In This Ocean" (parts I and II) deals with the reality of fear, despite the believer's security in Christ. Musically, it is somewhat whimsical yet reserved track arranged in an epically wave-like fashion. As the music goes up and down like the flow of the sea, the lyrics also drift from faith to doubt and back to faith. If you're looking for depth in your artists, Kings K delivers what your soul has always needed. Along those same lines, "Lost?" and "Sabotage/Home" provide well-orchestrated and lyrically transparent songs about trusting that God is in control - and that is better than our lives being in our own hands.

Now for the part that you, the reader, may have simply skipped to: Without a doubt the most powerful, controversial and more than likely most scrutinized song on the album is "A Prayer." Yes, folks - it comes in two versions: clean and explicit. And yes, the explicit warning of the original version is well-deserved as it includes an "R-Rated" word (The exact line of the explicit version is "Where the fear is f---ing violent." The clean version replaces the "F" word with "vicious"). The song is a heartfelt prayer of struggle, anxiety, and depression delicately attached to some of the most haunting music the band has composed yet. As Gardener pointedly and bluntly bares his heart before the Lord and concludes his petition by asking, "Jesus where are you? Am I still beside you? Jesus where are you?" the tone of the song shifts to a response rooted in the gospel, from the perspective of Christ, "I'm right beside you. I feel what you feel You know I died too, I was terrified. I gave myself for you, I was crucified. Because I love you, child." There will be people who will be upset about this song. But, as someone who struggles with anxiety, this reviewer loves both versions: The "clean" because it takes others into consideration as the band has decided to set aside their liberties for the sake of others, and the "explicit" because it is a raw, transparent and accountable song that truly displays the humanity we all feel sometimes.

The album closes with the hopeful yet confessional "Trackless Sea." Gardner acknowledges the struggle of our constant hope in Christ and the sinner that still resides in the believer, much like Robert Robinson referenced in his hymn, "Come Thou Fount of Every Blessing," as he movingly wrote, "Prone to wander Lord I feel it, prone to leave the God I love." Gardner modernly expresses this same sentiment as he sings, "I'm holding on to feelings in between. The faith I want is bound in apathy. I'm tired of doubt and feeling incomplete. Still, this hope I hold is my reality." It's that tension of the soul and the flesh that perfectly concludes the album.

At the end of the day, Kings Kaleidoscope is justified in receiving well-earned praises for their latest offering. However, there will be some that will be unable to look past the glaring "Explicit" warning on "A Prayer." But regardless, the band has made an honest and all-around excellent follow-up album that is sure to last listeners until the next chapter. Don't pass on this album just because you have a pre-determined opinion. If you have ever struggled for a moment in the midst of a life lived for Christ, this album may really reflect what your heart has been feeling.

Nearly two years ago, Kings Kaleidoscope blew me away with their Tooth & Nail Records debut, Becoming Who We Are. From the very first listen, I knew I had something great on my hands (or in my ears, rather). They've released a couple of EPs of re-imagined songs since then, but when I heard that a new studio album was on its way, I was pumped. And for the most part, Beyond Control delivers. Kings K is as experimental as ever, and you don't know what sounds to expect from song to song (especially with Zach Bolen of Citizen & Saints having co-written at least half of the songs). This time, however, all the songs are Kings K originals (no covers or hymns), and they seem to have tapped a little more into their soul and funk influences (parts of "Most of It") along with some, but not much, contemporary pop leaning ("Lost?"); I'd even say there's a little disco here ("In This Ocean, Pt. I"). Songs like "Most of It," "DUST," "In This Ocean, Pt. I," and "Sabotage/Home" stick out to me as some of the best songs on this album (and may even rival a few selections from Becoming Who We Are), but a portion of the album - though strong - doesn't seem as memorable, such as "Trackless Sea." "Friendship" is a mostly skippable interlude, and "A Prayer" (controversy aside) doesn't hit me like I thought it would (though I certainly do pray that it positively affects anyone who might be struggling with or might have forgotten about the endless love of Jesus). "DUST" is my favorite track, with "Most of It" coming in a close second, but I'm sure everyone who listens will find something to love in Beyond Control. - Review date: 6/26/16, Scott Fryberger

In 2014, a relatively fresh band by the name of Kings Kaleidoscope released an album that shook and challenged the worship music industry. Becoming Who We Are was a near perfect step towards a promising new territory and critics and fans alike devoured it. The band's follow-up release, Beyond Control, takes this creative vision even further and unfortunately this results in a mixed bag. Tracks such as "Dust," both parts of "In This Ocean" and the meditative ballad "Lost?" feature gorgeous arrangments and lyrical prowess. However, despite the quality of tunes presented here, the album feels inconsistent and musically unfocused. The instrumental interludes are mostly void of purpose and relevance (although "Friendship" does provide a theme) and most of the album's second half doesn't quite reach the excellence of the first. Although a lot will be torn on the band's newest offering, it's still a solid follow-up and worth checking out. - 6/27/16, Lucas Munachen