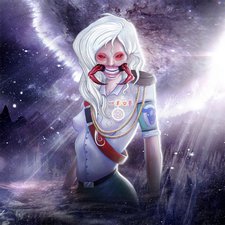 Showbread certainly has one of the more interesting band histories you're likely to see. They've gone from the darlings of the Solid State screamo/post-hardcore scene to a band who gives away all their albums for free on Come&Live! In between those two points is a veritable revolving door of lineup changes and stylistic adventures, from the epic concept double album Anorexia/Nervosa to the soft, almost alt-rock of their last album, Who Can Know It? Lyrically, they've covered everything from salvation to marriage to the zombie apocalypse. Throughout this, they've fostered one of the most open band-to-fan relationships in the industry, resulting in a fanbase that is both intensely loyal and remarkably stubborn, many of whom will still fervently declare the band's debut album to remain their best album ever, no matter how much it annoys frontman Josh Dies. So here we are now with their latest and (they hope) greatest work yet, Cancer. As was the case with Who Can Know It?, Cancer is fully fan-funded via Kickstarter and will once again be offered for free download from Come & Live! as soon as it drops. It's also worth noting that it is, in fact, both an album and a movie. However, we don't yet have access to the movie, so this review only covers the music.

And what lovely music it is. Perhaps the first thing you'll notice about Cancer is that it only has nine tracks. If you're afraid you're about to get short-changed, fear not, because the second thing you should notice is that all but one track is at least four minutes long, and four of them clock in at over five minutes. Thus, a mere nine tracks manages to cover almost a full fifty minutes of music. So what's filling all that time? Simply put, possibly the most stylistically diverse and lyrically profound music Showbread has ever made. What you consider to be Showbread's signature sound will depend on which of their albums you like the best, but whatever your choice, you'll find some of it on Cancer, plus a little bit more. Of course there's a good bit of the mellow, instrumentally simple sound of Who Can Know It? There's also a very healthy dose of good old fashioned screaming, so fans of No Sir, Nihilism is Not Practical can rejoice! One certainly shouldn't forget the heavy synth influences of Anorexia/Nervosa, which are also definitely present. And to top it all off, there's some of the standout lead guitar work that was so powerful on The Fear of God. But there's more, too. There's punk influences all over the place, especially on the opening track "I'm Afraid that I'm Me." There's straightforward Killers-esque modern rock on "Germ Cell Tumor," and finally, there's the tiniest little dash of worship thrown into the mix.

It's pretty apparent on listening through Cancer that Dies and friends chose to simply let the songwriting go wherever it would take them. Virtually every track cycles through several wildly different themes, often changing abruptly and then suddenly reverting back to a previous musical idea. You could almost call this Showbread played by Rush. Such a free-spirited approach to songwriting can often be disastrous, but here it's virtually flawless. "I'm Afraid that I'm Me" goes from vibrant gang chants to introspective piano rock to driving punk beats, then rounds it all off with a seemingly random instrumental guitar onslaught. "Anarchy!" borrows cues from sixties pop tracks with a bouncy beat and melody in the verses, then breaks out into a triumphant rock chorus that demands a sing-along. And then there's "Escape from Planet Cancer," which starts off with some gloriously frantic screaming, then abruptly transitions into an impossibly happy guitar lick, which is then covered by the most optimistic gang chorus Showbread has ever performed, proclaiming that "maybe there's good to be done where darkness abounds. We dare to hope, use love to beat evil down." And to top it all off, the closing "You Will Not Die In A Prison" is simply a beautiful song. It's a wonderful example of the ministry-minded heart of this band, as Dies sings "All our enemies and all our friends, the slaves, the masters, the rebels. May they all find their way into Your arms, may we finally share Your peace when we get there." It then closes with a truly great lead guitar solo that we normally wouldn't hear from these guys.

Of course, it would hardly be a Showbread album without some controversy, and Cancer definitely delivers in that regard. The freedom of no longer being constrained by a record label has allowed Josh Dies to speak his mind, and he holds nothing back here. The band's pacifistic leanings are apparent on several tracks, as well as their resistance to the idea of pledging allegiance to any flag or nation. They take a couple shots at the political system in "Anarchy!" and "I'm Afraid That I'm Me" and even voice disagreement with Calvinism in "Sex with Strangers." It's safe to say many of their listeners will disagree with them on some of these points, but the fact that they're willing to address some of these issues and at least start a conversation is a big benefit. And it would certainly be hard to fault them for their ultimate conclusion that Jesus Christ deserves our full allegiance and our primary purpose is to love and serve the world.

Cancer is Showbread at the top of their game. They've accumulated years of experience in a variety of genres and managed to cram all of that into nine wonderful songs. It's not often you get to listen to an album and feel all the pieces clicking perfectly into place as you do so. That's what Cancer does. The songwriting is flawless and it's fascinating. The instrumentation is diverse and very accomplished. The lyrics are challenging and thoughtful. The fact that they're now willing to simply give it away is even more remarkable. If you're still stubbornly holding onto your insistence that No, Sir... is the best that it can get, it might be time to let go. This might be the album of the year. This might be Showbread's best album ever. Whatever it is, it should be the album you have on repeat for the near future.

After a barely-successful Kickstarter campaign earlier this year, the Come&Live! raw rockers Showbread are finally presenting us with their new odyssey, Cancer. To get the whole experience, one would need to buy the DVD that goes along with the album; this review will cover only the audio portion. Showbread has always been one to push boundaries when it comes to lyrics and messages, and it's never been more true with Cancer. For the first portion of the album, the guys take a stand against the ways of our nation, pledging not to "pledge allegiance to a flag or to a piece of land" in the synth/punk track "Anarchy!" Some of my favorite lyrics are in the opener, "I'm Afraid That I'm Me," when Josh Dies says "'Blessed are the meek' succumbs to 'might makes right,' 'turn the other cheek' succumbs to pre-emptive strike, 'love your enemies' is fossilized beneath the frozen tundra, and 'blessed are the poor in spirit' is devoured by 'God bless America'." As the album closes, Dies sings more about his own times of doubt and disbelief, as he longs to escape the planet Cancer (spoiler alert: it's Earth), and the sinful curse it's under. But they lead out with a worshipful track called "You Will Not Die In A Prison," ending on an uplifting note. For those wondering what sound they've gone with, it's a bit of a hybrid, as it features screamy and rock-filled portions akin to No Sir, Nihilism Is Not Practical, with other sections sounding a lot more like their last album, Who Can Know It. Oh yeah, and there's some ska. Yes, ska. Highlights include "I'm Afraid That I'm Me," "Sex With Strangers," "Anarchy!," "Germ Cell Tumor" and "You Will Die In A Prison." - Scott Fryberger, 9/22/12