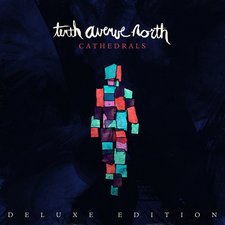 Cathedrals represent an important part of the Christian canon. As highly visual representations of the church, these impressive edifices took hundreds of years to build, and they still stand as a reminder of the hard work and determination it took to build something grand in scale. Great art takes time to curate, and Tenth Avenue North knows. Much like a cathedral, TAN's efforts are ornate and large in scale, but also like a cathedral, they potentially try to do too much. Either way, it's a great analogy for TAN's fourth studio album.

Stylistically, Cathedrals feels like a natural follow-up to the production-heavy The Struggle, though it also mixes in some key elements from the lighter The Light Meet the Dark to make the record feel reasonably balanced. What's probably most noticeable, however, is Mike Donehey's vocal exertion this time around; every note feels higher than usual, and though he hits every single one without issue, the energy never really lets up. The "less is more" approach is used so infrequently that the closing track "All the Earth Is Holy Ground" feels like a breath of fresh air rather than a subdued grand finale. This isn't to say that the upbeat tracks are always detrimental, however; "Heavens Sound" and "Closer" are both polished in the important ways that keep the album dynamic.

The title track is truly meant to be the centerpiece for the album, however, which it mostly succeeds at being. Leading up to the song is the intro track "Iesu, Dulcis Memoria," featuring the stunning voice of Audrey Assad, and she lends quite a bit of credibility to the album's concept. Though the verses of "Cathedrals" seem to indicate a faster chorus than what listeners actually get, it's still a memorable track that features a convicting cry for God to serve an active role in our lives ("God, fill this space with joy, take temptation's place/we will taste and see you as you are").

There are some songs in the album, however, that have less than interesting melodies. For instance, "I Need You, I Love You, I Want You" never seems to deliver on its promise of a crescendo, resulting in what feels like four minutes of the same note. Similarly, "Stars In the Night," "The Spark," and "Stay" feel like boilerplate material, featuring undeveloped choruses without a satisfying hook. "We Won't Numb the Pain" is also oddly executed; it's a truth-filled track about the cowardice of hiding from problems, but the track gets bogged down by a distracting song structure, as if it's trying to replicate Switchfoot's rambunctious "Selling the News." These are the sorts of tracks that feel puzzling in the midst of other truly great material.

TAN has always been band to focus on truth-telling. That's half the battle in writing quality songs, but it's also the element that's kept their listeners faithful for the last several years. Additionally, they've proven to be deep theological thinkers, though this element only seems to bubble under the surface. Both of these traits are ubiquitous in the band's entire discography, and Cathedrals is little exception. While there are tracks that reach well into some introspective footing, they mostly stay accessible to an almost simplistic degree. "No Man Is An Island" is the perfect example of this type of songwriting; while the track's message is absolutely commendable as a reminder for Christians to be vulnerable with those around them, it's disappointing that it resorts a tired cliché for the hook to get this message across. In the end, it's typical songwriting for TAN, but it's what people have come to know and love.

At this point in Tenth Avenue North's career, an album such as Cathedrals feels unsurprising, but also genuine. It's a clear result of the hard work from over a decade of musicmaking experience, while also taking cues from what their fanbase most appreciates. Still, it's far from a flawless release with eleven tracks that are listenable, but often uneven, though they do improve upon repeated listens. It's inconsistent, but also entirely respectable, and it's this latter quality that makes for a landmark CCM release this fall.

With Cathedrals, Tenth Avenue North illustrates that you don't have to be cutting edge to still be sharp. "No Man Is An Island" bursts out of the speakers (with its proto-U2 flair) as one of the finest pop-rock songs of the year, and hits the target lyrically; taking on the notion that life is supposed to be tailor made to your specifications and that other people are incidental to your life. "We Won't Numb The Pain" likewise takes a hard look at how online life, media (as in content you consume passively) and being plugged in constantly is no substitute for facing the hard realities of life head-on. Over the course of four albums, Tenth Ave has wrapped prophetic statements in great melodies. Though they might seem too "safe" and inoffensive to some listeners, a closer look at themes and lyrics reveals a tougher message than might be expected from a band that has a nice home on Christian radio. Musically, the album feels cohesive and, at times, daring. The ethereal, Latin chanting of "Iesu, Dulcis Memoria" segues nicely into the soaring title track, and "Closer" and "Spark" sound like they could have been on The Breakfast Club soundtrack in the 80's. "All The Earth Is Holy Ground" wraps up the theme of the album nicely, and in the end, Cathedrals sounds like an album that was labored over and well worth your time. - Review date: 11/9/14, Alex Caldwell

Over the years, Tenth Avenue North has somehow found their way onto both sides of the debate regarding CCM quality (or lack thereof). That said, most can agree that 2012's The Struggle was a step in the right direction, and Cathedrals is an even bigger step. There is still some creative unevenness that was prevalent on their last album, such as the very Switchfoot-esque "We Won't Numb the Pain" or the safe "Stars in the Night," but quality tracks like "No Man Is An Island," "Stay," and "Closer" are more frequent. In fact, the title track is possibly the band's best song to date. While a solid album on the first listen, subsequent spins reveal a more surprising depth and appreciation, owing to the musical and lyrical nods, such as the ukulele in "No Man Is An Island" or the Latin chant "Iesu, Dulcis Memoria." When all is said and done, while falling short of being cutting edge, Cathedrals is a wonderful example of what good, quality CCM can sound like. - 11/9/14, Mark Rice of Jesusfreakhideout.com