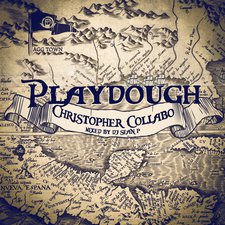 Texas emcee Playdough has been in the rap game for over a decade. He's dropped albums and mixtapes as a solo artist, as part of several groups (Phonetic Composition, ill harmonics, Deepspace 5), and done collaborative efforts with Heath McNease, DJ Sean P and For Beats' Sake. In addition to all that stuff, he's done many appearances on other peoples' songs. So, because of all of that, he has plenty of material for his latest mixtape, Christopher Collabo. Mixed by Sean P, the authentically-styled mixtape features Playdough's raps from all over the place; some of them may be new to even the seasoned Playdough fan, and some of them will be easily recognizable.

When I say "authentically-styled mixtape," I'm referring to the fact that Christopher Collabo is divided into two tracks, both title tracks, but with the post-scripts "Side A" and "Side B." "Side A" is a half hour long, and "Side B" is twenty minutes. Each track just flows through different verses that Playdough has rapped over the years, one right after the other, all mixed together by Sean P. "Side A" starts with a verse from Playdough's breakout solo album Lonely Superstar, and jumps all over the place from there. As far as Playdough's own material, you'll hear Phonetic Composition and Deepspace 5 raps, as well as material from Don't Drink The Water, Writer Dye: Deux or Die, and his mixtape with Heath McNease, Wed, White & Wu. He also worked in verses from McNease's Straight Outta Console ("Style Points"), Move Merchants' self-titled album ("Live As It Gets"), and a feast of others I had never heard before (but wish I had).

"Side B" has more awesome bangers, including a cut from a Pigeon John song that Playdough did that flows perfectly into the opening verse of the Deepspace 5 track "Goose Needs This," from The Blueprint 3 Outtakes. "Goose Needs This" features one of my favorite beats he's ever rapped on, as does "Don't Drink The Water" from the album of the same name. I was glad to hear that one make itself known here too. The amount of different songs that he pulls his verses from on this mixtape is astounding; he's so talented, relentlessly rapping his butt off on his own material as well as the material of others. It seems that "Side B" features a great deal more stuff I hadn't heard before than "Side A" does, but the quality is still high. If you have a favorite verse of his, it's probably here.

The beats you hear are from a wide range of producers. Dust, Beat Rabbi, Pigeon John, Sean P, Alex Goose, For Beats' Sake, and the Wu Tang Clan (technically). What's cool is that all of what you hear, as far as the rapping and the beat, is exactly how it sounds on its original album. So Sean P deserves some props here as well. Not only did he throw in some additional samples here and there, but he was also responsible for taking all of the different verses and their respective beats and essentially turning them into one long, flowing track. In some cases, it was a clean-cut jump into the next track, but a lot of times, he blends together the end of one and the beginning of the next, so that the track is just a smooth ride-along. The team of Playdough and Sean P is a strong one; two like-minded individuals with the same love for hip hop.

Playdough says that this one is for his Road Dogs. He asked on Twitter for input from his fans as far as what their favorite verses are, so a lot of what went into this, as far as content and verse choice, was appreciation for his fanbase. Christopher Collabo is well worth the five bucks, as you get to experience the best as well as get introduced to something you've probably never heard. Don't let the track lengths scare you; you'll find it easy to get into the groove and listen to Playdough rap for almost an hour. If you're a fan of hip hop, think about forking over some cash for this collection.