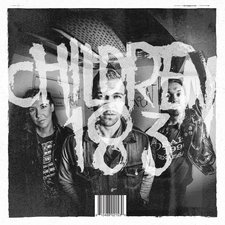 
Consistently accomplished bands like Children 18:3 are sadly quite rare. With every member's talents noticeable on every track and every intricacy accounted for, the band of siblings create an unbelievable story together, and most groups just don't click together this well on a regular basis. But David, Lee Marie, and Seth Hostetter all found a way to harness their collective creative energy and release album after album of excellence. But all good things come to an end, and in January 2014, the band announced a Kickstarter campaign to raise funds for the band's fourth and final album. Sixteen months later, listeners finally have Come In, and it brings about a certain retrospective as the band's final statement.

Final albums, of course, beg certain questions about the band's past and present: how did they evolve over time, and what kind of career did they achieve? The inescapable aspect of Children 18:3 is that they really did pick a certain rock sound and stick to it for the whole nine yards, though many bands on Tooth & Nail Records do and have done the same. But unlike so many of those bands, C18:3 always changed just enough in their methods to make every album its own unique event. The punk rock nucleus has always been here, but no two albums have been alike. But at the end of four albums, comparing the newer material of Come In to the band's classic self-titled effort reveals fewer deviations than one might expect. While Lee Marie has steadily taken more and more lead vocal duties and the group has moved from shorter punk bursts to longer, more standard rock tracks, things have mostly stayed the same over the last decade, and if nothing else, Come In reminds us even more of that reality.

Much like Anberlin did for their final album, Lowborn, Children 18:3 pieced together Come In on their own but partnered with Tooth & Nail for distribution purposes. But while Lowborn was a purposeful mix of both the warm familiar and experimental left field, Come In falls more on the least risky side of the equation; tracks such as "Hold Your Breath," "For This We Ride," and "Watch Over Me" feel like short punk blasts that don't make too many impressions, and are at worst unmemorable and at best accessible. But just like the rest of the band's work, repeated listens to the full album tend to reveal the special moments. C18:3's lyrical style has always been on the interpretive side anyway, with later listens tending to reveal depth over time.

Most of the highlights of Come In are more of the same greatness as before. Seth's drumming is unspeakably polished, while David and Lee Marie share the rest of the duties expertly. The intro title track is a warm invitation to everyone ("Are you empty? Are You broken? Are you lost and all alone? / Unaccepted? Suicidal? Are you looking for a home?"). These descriptions fit us all, and they usher in the realistic human futility of "Bethlehem" and "After All." These two, along with the sweetly redemptive "Don't Stop Moving," are probably the most complete tracks here. But it's the slower and reflective "Long Ride Home" that really hits home and helps make the album distinctive in the band's catalog. It recounts the band's experiences as a relentlessly touring group starting with humble beginnings ("the other night on a couch you dropped a beat / took a chance on never-ending curtain calls and touring / that night when I borrowed a guitar / became 13 years of open surgery").

In the popular consciousness of Tooth & Nail devotees, Children 18:3 wasn't necessarily the most well known of their label family, but they were among the most talented and original. While it's hard to envision Come In years down the line as the most memorable album of the band's decorated career, the album does little to tarnish their reputation as quality musicians and songwriters who simply do what they do best. But perhaps the best news is that after the final drum rolls and vocal echoes of "Long Ride Home" come and go, the Hostetters will rise again in more musical projects on the horizon. But for now, Come In is a more than fitting finale for this exceptional trio.

Before we all bid farewell to Children 18:3, the band offers their fourth and final album that closes their bid as one of the most consistent Christian punk rock bands in the last ten years. If you thought the first album had a raw sound, it's evident the band has sharpened their music some. However, there's still lots of energy on the album along with a couple of their usual chaotic sounding pieces (Most notably "Afterall"). I've always appreciated their cleaner punk flavored pop music and "Let There Be Light" and "Great Big World" perfectly fit the description. There's no long, final rock songs this time around (like "Lost So Long" and "Final"). Instead, we're treated to an introspective piano driven ballad in "Long Ride Home," which seems like a fitting end for the trio. It also doesn't take long for the band to explicitly link redemption to Jesus Christ ("Bethlehem"). In addition to several other references to God and the Bible, the album seems to emphasize themes of innocence and hopeful exploration of the future. Come In is very much a Children 18:3 album; it's hard to tell exactly where this album will fit into the ranks of the band's discography. The one sure thing is this: the trio brings one last, strong punk-inspired rock project into an underserved genre in Christian music. - Review date: 4/16/15, Nathaniel Schexnayder

With Children 18:3's latest, another one of Tooth & Nail's most exciting and reliable bands ever has brought their career together to an end (at least for now), and Come In is an appropriate send-off. With more polish and melody than the Minnesota siblings have provided in the past, it isn't quite the raucous pop-punk fans loved in years past, but it does follow a logical progression from the their preceding three albums. And frankly, it is perhaps more appropriate for the final album of a band's career to be musically smoother than, say, their 2008 self-titled label debut. But while "Hold Your Breath," "Don't Stop Moving" and "Great Big World" bring out the band's more melodic side (in a very good way, mind you), old school fans will dig tracks like "Afterall," "Watch Over Me," and "Let There Be Light." And few can argue against Lee Marie's beautifully sentimental farewell from the Children in "Long Ride Home." Pick this one up for sure. - 4/29/15, Mark Rice of Jesusfreakhideout.com

The three rockers that make up Children 18:3 are responsible for some of the best of the best from Tooth & Nail Records in the last seven years. It's always sad when a good rock band puts their instruments down, but a band of this caliber doing so is even sadder. Thankfully, Children 18:3 is giving us one last offering before moving to the "alumni" section of T&N's website. The crowd-funded Come In is a strong effort, and it's everything you'd expect from the band: a lot of energy and passion, with some anti-formulaic approaches to punk rock. It's also perhaps their most accessible album, with several cleaner-sounding pop punk tracks in the mix, such as the album's first single, "Hold Your Breath," as well as "Because of You" and "Great Big World;" the latter two are also fronted by bassist Lee Marie Hostetter, instead of brother and main vocalist David. While this is surely a Children 18:3 album, it's a much more polished and slightly more mature effort than the band's pre-Tooth & Nail material, or even their self-titled debut. Overall, it's not quite the album I was hoping for, but that being said, it's a fine way to go out (and the closer, "Long Ride Home," is an excellent, and slightly emotional, final track). With two-thirds of the band comprising the metalcore band Lessons, it's nice to know that we'll still have some of these talented musicians bringing us new tunes. Thank you, Children 18:3, for helping to restore my faith in mainstream Christian rock music. - 4/18/15, Scott Fryberger of Jesusfreakhideout.com

It's not a very common occurrence where a band of siblings stays together for very long. Children 18:3 are an obvious exception to this observation as these brothers and sister have been making music together since 2002 -- David and Seth were in a band together starting in 1999; that's 16 total years. We've known the final album was coming for a while, which could lead to unrealistic expectations, but fortunately, the Hostetter's have released what is possibly their best album to date. David's raw vocal performances on tracks like "Come In," "Afterall," and "For This We Ride" absolutely steal the show, but Lee Marie's showings on "Bethlehem," "Watch Over Me," and the touching send-off "Long Ride Home" are also of note. This trio has produced a solid punk rawk inspired set of rock songs that fans should absolutely love for the final outing. With any luck, the trio will emerge again sometime in the future for a reunion and new record, but until that time hopefully comes, they will be missed. - 4/23/15, Michael Weaver