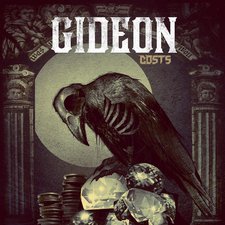 These days, metal and hardcore music can get fairly pretentious. Everybody seems to be competing for a bigger, more complex sound, and the amount of genre-mashing going on is truly astounding. However, the artists coming from the Facedown Records family rarely follow this trend, and new band Gideon is certainly no exception.

Everything about Costs, Gideon's Facedown debut, is exactly what you would expect from a hardcore band. The album has a mere nine songs; they're all fairly short, and they're all passionate, intense, unashamed hardcore.

The album kicks off with some rumbling bass and drums, followed by a good dose of growling/screaming. It then gets into top gear with a lot of crunchy guitar chords, blast beats, and a liberal dose of breakdowns. It's basically exactly what you would expect from a meat-and-potatoes hardcore band. The vocals are comfortably typical, and are occasionally interspersed with some clean singing. Fortunately, the album keeps up a pretty rapid pace, and the band manages to keep things interesting even without being particularly innovative. This isn't extremely creative, but it's well-executed hardcore and the album benefits from its simplicity. There's no need for extensive production, blistering fast solos, or any extra instrumentation. It's just grinding guitars, some adept double bass work, and passionate vocals to top it off. In short, this is music begging to be heard live.

Of course, no Facedown band would be complete without solid lyrics and Gideon doesn't disappoint here. A common theme on Costs is greed and corruption, addressed in "False Profits" and "Brave New World." The album also deals with the reality of others trying to question the singer's faith. He answers these doubts by saying, "When all my friends have picked up and gone, I still believe," and "Save your words, they fall on deaf ears."

If you're looking for some new hard music to keep your ears interested, you could certainly do worse than to pick up Costs. It's a blessedly simple, fists-in-the-air, headbang-worthy hardcore album that will definitely satisfy any fans of the genre. And there's no need to be pretentious about it.