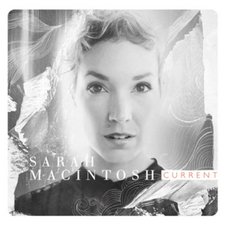 As a Christian pop pioneer from years past, Sarah MacIntosh hasn't been one to draw much attention to herself in recent years, but that's about to change for the better. The former Chasing Furies frontwoman has been working seemingly in secret to create a new project for the masses to be released on Integrity Music, entitled Current. With so much potential to showcase her talent and a great outlet to do so from, Current does just that, and it's like nothing she's previously produced.

At first, MacIntosh's approach this time sounds quite a bit like fellow pop singer Charmaine's latest venture, and actually, the two have comparable recent histories. After taking some time away from the music scene, both returned with a more modern method, and they're better musicians for it. With great producers and refreshing songwriting under their belts, both the singers' projects work surprisingly well considering their dicey attempts. But in the end, both albums really work, but they do in tangibly different ways.

MacIntosh's real selling point musically is its diversity, and not in Charmaine's way. With co-producer JT Daley (of the experimental rock ensemble Paper Route) on board, Current's influence is obvious. From the opening title track, thumping percussion and serene strings come together with MacIntosh's pristine voice to create a solid sound. Alternative pop by name only, Current doesn't remain in traditional confines, though her songs are still easy for listeners to follow; "Take It All," "Hope," and "Laughter Comes Upon Us" feel very familiar in their arrangements, but they still take the listener into a strange world of soaring and soft vocals and impactful compositions. "Galaxy Former," focusing on the Lord's creative nature, is a good example of the multilayered pop sound that MacIntosh exhibits with strings, synths, and laptops all contributing in fluid motion, all while taking the listener through a journey of sometimes uncomfortably polished twists and turns. More listens to MacIntosh's style results in a better appreciation for her technique, and it's time well invested.

Still, not every song majors on these distinctions, resulting in the album's slight imbalance. After the first three tracks leave the listener stunned, the fairly typical pop worship ballad "Hope" shows its face, and while it's not a horrible cut, it somewhat disrupts the album's continuity. "Hiding Place" functions in the album in a similar manner, though not quite to the same extent. When it stands alone, it's a fabulous musical tribute to God's role as a protector, but even more could have been done to the song to keep it in tune with the album's overall concept. Minor complaint as it is, these tracks distract a bit from the otherwise flawless surge of experimentation that Current is meant to be as an album experience.

While not a watertight project, Current takes more than enough risks to warrant one listen, a second, and many more afterward. Likely to be one of 2012's more accomplished pop efforts, its distinctive factors really make the record stand apart in bold fashion and they breathe new life into another great singer's career. Upon this favorable survey, listeners would do well to get caught up in Sarah MacIntosh's Current.

Sarah Macintosh's Current should be required listening for every aspiring worship artist out there. More than ten years removed from fronting her all-sibling alternative rock band Chasing Furies, Macintosh returns with an off kilter yet wonderfully accessible vertical release of left-of-center worship songs. The album's title track crackles from the beginning with the creative use of a string section and Sarah's distinct vocals. This hummable tune pleas with the Lord to "save us from the current of this world" and balances pop with what might be called "art rock" nicely. This aquatic metaphor is returned to in the second song "We Should Run" and serves as a theme for the rest of the album. Fans of Chasing Furies' artful rock and roll will find much to like in these tunes, and Sarah's writing, particularly in the way the songs thematically mesh and brim over with hooks, has only matured over the years. So consider Current a textbook example of great, worshipful songwriting and let the class begin. - Review date: 3/4/12, written by Tincan Caldwell of Jesusfreakhideout.com