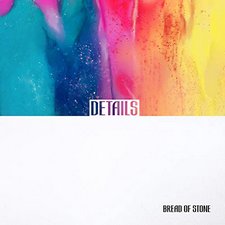 
With extended-play releases being all the rage these days, ever-increasing numbers of artists are becoming more amenable to the idea of doling out their music in modest doses rather than in full-album installments. Such is certainly the case with Iowa-based pop outfit Bread of Stone, who recently released their first project in four years in the form of their new EP, Details. As it turns out, the abridged format suits the Iowa-bred quartet quite nicely.

The ingratiatingly effervescent leadoff cut, "Won't Let You Go," should curry no small amount of favor amongst members of the Walk the Moon and Neon Trees fan bases. The bracing rhythms and sparkling mandolin flourishes that adorn the Americana-inclined "Not Alone" render it a peppier, and more engaging, counterpart to the already-winning original version from the 2015 album of the same name. The buoyant, breezy vibe of "Before" is more than a little bit infectious. And the blue-eyed pop-soul of "Running" is smooth as butter and twice as satisfying.

The more perfectionistic members of the listening audience will be quick to note that "Before" isn't all that different from the average radio-ready inspirational pop offering, while the underlying groove of "Running" pulls up just short of reaching true funk and swagger. Others in that same group will contend that "Not Alone" skirts a little too close to the line that separates the cute and clever from that which could be considered precious or affected. And both factions would be forced to admit that the spate of "Oh oh oh" backing vocals which pepper "Won't Let You Go" are more than a bit overused by this late point in the game.

That said, when the record's drawbacks are stacked up against its far more plentiful shining moments, any such objections soon become more finicky than substantial. And while the decision to spread such a diversity of styles over so short a running time may strike some listeners as a bit dizzying or scattershot, whatever the EP winds up forfeiting in terms of cohesiveness, it more than makes up for by virtue of its undeniable vigor and keen pop sensibility.

Not nearly destined to change the musical landscape as we know it, or spawn legions of sound-alike artists, Details is, nevertheless, yet another eminently engaging addition to what is already an impressively solid back catalog. Perhaps even more importantly, the majority of its songs are just different enough from the prototypical Christian Top 20 single to suggest that a work of truly exceptional proportions from the BoS foursome may well lie just around the next corner.