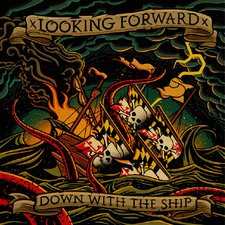 Hardcore punk outfit xLooking Forwardx put their newest music on display with the EP, Down With the Ship. The EP is a sucker punch that strikes and is gone before you know it. This hit-and-run disc clocks in with eight tracks at just eleven and a half minutes. It features an intro and an outro with six songs jammed in between, each ranging from 1:03 to 2:07 in length.

The music and lyrics come at you in a pace as fast and furious as the album's length. There is no wasted space, as each song starts within a second after the previous ends and the blistering speed never backs down. Many will view this as a negative, but it really brings back what this genre used to offer musically in the late 80's and early 90's. It's funny to think of a band like this as old school, but with so many sub-genres of "hardcore" these days, people tend to forget (or just don't know) where hardcore came from, or just what was considered hardcore in the late 70's (yes, kids, hardcore was around in the 70's). Bands like Black Flag and Dead Kennedy's paved the way for xLFx and so many before.

The title track, "Getting Back With Your 'X'", and "Put Up or Shut Up" lead the way in this collection, but "Demanding Answers" may be the best of the bunch. Other than its brevity, the only real complaint is that the intro and outro are essentially the same. Both feature the same opening riff, but have slightly different endings. "Intro" features a palm-muted guitar part, while "Outro" features the same exact guitar parts minus the palm-muted addition.

Long-time fans of hardcore punk will be excited to hear this EP. xLFx has always had an old school sound, but the offerings on Down With the Ship show they are still legitimate after twelve years. One can only hope for a full-length album from these guys in the very near future. In the mean time, enjoy these six high-speed musical accomplishments.

After taking a brief hiatus as a band, Facedown Records hardcore punk foursome xLooking Forwardx are looking forward to a bright future. Their first release since 2005 is a short EP called Down With The Ship. It's got eight tracks (including a quick intro and outro as the bookends), and it adds up to about eleven and a half minutes in length. Yes, these guys get right into the punk rock and only slow down in the short time between tracks. Only three of the eight tracks break the two-minute mark, and even those only barely do, which could make you wonder if the songs have anything to offer. But it's important to remember that this is typical of hardcore punk like this; while some bands fail to make the most of the quick and short nature of this genre's songs, xLooking Forwardx takes full advantage of every opportunity to give you excellence in punk rock and to speak out for what they believe in (whether it's friendship, God, or their straight edge lifestyles). Highlight tracks are "The Fast and the Spurious" and the minute-long, straight edge anthem "Getting Back With Your 'X.'" My only complaints are that the intro and outro are too short, despite having awesome guitar riffs that I feel could've been fleshed out a little bit more into another couple of songs. But this is minor. For only five bucks for a physical copy (including 7" vinyl), it would almost feel like I was ripping them off. If you've been a fan of the band or you like hardcore punk in general, you'll love Down With The Ship. - Scott Fryberger, 6/11/12