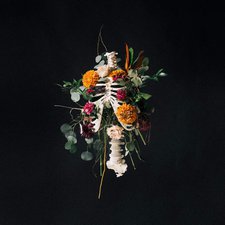 
Elevation Worship has grown into almost as big of a name in modern worship music as Hillsong or Bethel. The NC megachurch definitely get their share of criticism, but they've largely managed to stay out of the limelight in a negative way. Their worship team, led by Chris Brown, however, has been writing song after song in recent years that can be heard in any number of churches on a Sunday morning. Hugely popular songs like "Do it Again," "O Come to the Altar," "Resurrecting," "See a Victory," and the very recent "The Blessing" with Kari Jobe and Cody Carnes, are just a few examples. After last year's excellent Midnight EP, the group is back with their newest live worship album, Graves Into Gardens.

The album starts out with "RATTLE!," an extremely fun song about the resurrection of Christ. It may not be the most worshipful song about this blessed event, but it is a super fun listen and really easy to sing along with. The rock vibe of the song is a nice change of pace from the sound that many of these megachurch worship groups are offering up. "My Testimony" follows as another upbeat song about our testimony in Christ. Some may take issue with the "I" and "me" centric focus of the song lyrically, but overall, it's about giving God praise through the things He has done for us. The Brandon Lake-fronted title track is up next. Lake's raspier voice keeps the rock vibes going with "Graves Into Gardens" -- especially when the bridge hits. The song is a reference to the Garden tomb in Jerusalem and sings the praise of things only God can do. Lake sings, "You turn mourning to dancing. You give beauty for ashes. You turn shame into glory. You're the only one who can," and "You turn graves into gardens. You turn bones into armies. You turn seas into highways. You're the only one who can." From here, things slow quite a bit with the aforementioned, and already widely popular, "The Blessing." The song is a direct scriptural reference, but suffers immensely from repetition. The track clocks in at nearly eight and a half minutes and features of chorus of repeated "amen's" and a bridge of repeated "He is for you's."

The next two songs are pretty similar in sound and feel. "Available" and "Authority" both are slower piano-driven numbers that eventually build: the standard worship formula. This isn't to say there aren't positives here, but they get lost in the shuffle a bit -- especially with the Tauren Wells-featured "Never Lost" immediately following. There is no denying the capability of Wells' voice as he sings out, "You can do all things, but fail, cause You've never lost a battle; no, You never lost a battle. And I know, I know You never will." It's a soulful pop song about God's unlimited power.

The slower piano returns for "No One Beside" after Wells' appearance, but this one stands out a bit more than the previous two. After vamping on "You can have my heart," for just over four minutes, the band finally goes into the next song. "There is a King" offers up a very different sound than expected on this type of worship album. The song has very light acoustic guitar, light percussion, keys, and some interesting vocal effects. It's certainly not be the best song to put on for high-energy worship, but it does offer a unique time for personal reflection and worship with its stripped-down feel. After the softest song on the album, the Isaiah Templeton-led "What Would You Do" follows. The song utilizes the softness of the previous to start, but eventually builds into a full-throated gospel number. After the lone gospel song the album comes to close with a reprise of sorts. "GOD SAID LIVE!" isn't an exact reprise of "RATTLE!," but it eventually gets back to the chorus of the opening number after vamping "God said live," for a bit. This brings the album around full-circle and ends things in a different way than what would normally be expected.

Graves Into Gardens isn't the most groundbreaking worship album you will hear, but I appreciate Elevation's attention to detail and their willingness to vary the sound. One major issue with so many modern worship albums is that the songs tend to bleed together to the point that you can't tell them apart. Elevation manages to break things up just by changing vocalists, but also by completely changing styles. The album features rock, contemporary worship, pop, and gospel music. Not many of the major worship groups are swinging for the fences in this way. Elevation Worship definitely has their own sound, but their willingness to bring outside members in to inject a new flavor and change things up keeps them interesting. I'm not sure Graves Into Gardens will win anyone over that didn't like Elevation previously, but it should keep listeners who enjoy them happy while providing several new songs for churches to insert into their services. The overall impact isn't quite the same as the Midnight EP, but Elevation does a nice job here offering worshipful music in varied ways.