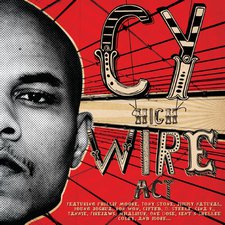 Texas rapper CY isn't a new rapper. He's been making solo albums since 1999 when he independently released an EP called Versatile. A few years later, he signed with a small record label called Much Luvv, and he released his debut with them, The Complex, in 2004. After one more studio album in 2008, Circus World Event: The Ringleader (with a chopped & screwed version) and a best-of collection, CY has found himself with the newfound blessing of national distribution. His latest studio album, still through Much Luvv, is called High Wire Act.

CY's last studio album, Circus World Event, was a concept album. The whole album compared life to a circus, and the music even had a circus feel to add to the idea of it all. The idea was solid, but the execution was moderate at best, with the music being a little stronger than the vocals. However, it was pretty easy to see CY's potential as a hip hop artist. After listening to High Wire Act, it's clear that he's taken advantage of that potential. His music and vocals have both matured significantly, giving High Wire Act a lot more weight to it. CY sounds more confident - not that he wasn't before, but it's more evident this time around - and his skill definitely shines a lot more. With only a little more production value, he could easily keep up with the artists from the Cross Movement crew.

CY's lyrics are completely focused on God. It's clear that he's completely sold out to his Savior, and the idea of not glorifying God in everything is foreign to him. Even when his verses aren't directly about God, CY is always uplifting Him. In "Step By Step Cypha," CY's lyrics are all about the path in life he's taken, from being new to the rap game, to getting married and meeting good friends who became like family. Through all of it, he's careful to recognize God's grace that was there for him with every step. It's cool to get a little background information about him and his life; it's also encouraging to hear when people take so many steps and eventually meet their goals and dreams.

One thing I like about the music this time around is how the beginning maintains some of the circus feel like that of his previous record, but as the album progresses, it takes on more of a west coast sound. It's almost as if it's supposed to represent a transition from a previous sound to the sound CY wants to make this time. In addition to the circus-style music at the beginning, CY also experiments with hard-hitting rap in "Godz'illa," as well as west coast rap in "Balance," dirty south mixed with a small dash of reggaeton in "New Day," R&B in "As The World Turns" and straight up hip hop in "Step By Step Cypha." Along with the different styles, High Wire Act features some guest emcees that fit the styles well. The biggest name in the guest emcee department is in "Godz'illa," where we hear from Cross Movement Records artist Young Joshua. He provides a nice guest spot, as does the lesser-known Von Won, who brings a speedy flow in "Comin' Up." The rest of the guest emcees are good, but don't really bring anything that memorable to the table.

CY has definitely grown as an artist over the years, showing a great deal of talent in his latest album. Those who heard his last outing, Circus World Event, and weren't particulary enthralled with it may be skeptical, but High Wire Act is several steps up. It may not be album of the year material, or even hip hop album of the year, but it is a good album. Even better, I think CY still has more potential locked away. He could be one of the top rappers in the Christian industry if given enough time. Check out High Wire Act and see if you agree.