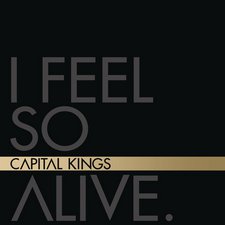 It goes without saying that trends and fads come and go, but they somehow end up making their way back around the horn a few decades down the road. Among the vast amounts of movie remakes and neon leg warmers is the re-popularization of electronic pop music. Electronic pop technically never really "went away" as much as it has risen to prominence in our culture again. Amongst the droves of bands jumping on the bandwagon are the fresh-faced and newly signed Capital Kings.

Gotee's newest addition to their roster is an electro-pop duo that is comprised of Cole Walowac and Jonathan White. Capital Kings has been leaving their mark on the map by joining tours like Winter Jam and performing at events like Camp Electric. Their recently released debut EP, I Feel So Alive-EP, is a collection of four songs and seems to give us a taste of what's to come from their future full-length (releasing in January).

Track one is also the title track and blends some soft synth patterns with lyrics that are about finding new life in Christ; "I feel so alive, so alive inside." // "I'm breaking through the haze, to a brand new day, because my heart has been revived." Even though the song (and the whole EP) is primarily synth and drum patterns, there's also a little guitar thrown in at the end of the song, which adds a nice touch. "Be There" is up next, and has a much darker feel than the previous song. This track seems to be focused on stacking murky patterns on top of each other to create a thicker sound. There is also a short breakdown in the bridge, which listeners should enjoy. The lyrics in "Be There" state that God will always be there, "When the lights go down, I'm gonna be there. //When you're all alone, I'm gonna be there. //When you're hanging on, I'm gonna be there." Moving along, "Tell Me" is the third track and also slows things down for a few minutes. Even though it's still electro-pop, it also has a slight R&B vibe to it. The synth patterns are still employed, but they are more subdued than the previous two songs and are used in a more "poppy" kind of way. On this tune, the boys plead for assurance, "Tell me everything's alright, tell me everything's just fine. // Tell me the words that I need in my life." Rounding out I Feel So Alive is a remix of the title track. Since most remixes are in vein of Capital King's genre, this one fits right at home on the EP. While the remix is well done, it does feel like they're double dipping with the songs on here a little. That's probably their biggest downfall on I Feel So Alive.

For their first outing, Capital Kings manages to introduce us to who they are as artists and their musical style. If you're a fan of this genre, then there's plenty to love about Capital Kings, but for casual listeners looking for something new, this EP may sound all too familiar if you listen to other artists with a similar sound. Nonetheless, Capital Kings does a solid job on this EP, aside from the unnecessary remix, and we should expect more good things to come from them in the future.

If you've been paying attention to TobyMac's latest releases of 2012, you may recognize the name Capital Kings from his latest remix project and from the bonus tracks on his hit record Eye On It. As it turns out, the Capital Kings are more than just remixers - the band, made up of lead singer/producer Jon White and singer/drummer/producer Cole Walowac, is a self-produced electropop/dance duo who have recently been signed to TobyMac's Gotee Records. After hearing their debut single on YouTube, "We Belong As One," I was excited to hear the Kings' debut EP, and I'm pleased to say that it's a solid pop release full of huge dance beats and, of course, some dubstep.

The opening track, "I Feel So Alive," sounds like pretty standard pop fare, but when you consider that Jon and Cole did almost everything on the song themselves, the song becomes that much more impressive. Jon's voice is not your typical pop voice, but it fits surprisingly well in with the electro chords and pounding four-on-the-floor beat. "Be There" is a bit of a change, providing a noisy yet ambient electronic backing to Jon and Cole's harmonies, and even featuring a short wobbly dubstep break for the bridge.

"Tell Me" is a softer, yet no less energetic, song asking for God's guidance in a crazy world, featuring a solid beat and some bleepy electronics and piano. In fact, all the lyrics on the album are a nice change of pace from every electro house and dubstep song nowadays - they're well-crafted and uplifting, and catchy too. The last song is TobyMac collaborator Telemitry's remix of "I Feel So Alive," putting a nice dubstep-y but easy-to-dance-to spin on the track.

Overall, this EP is an incredibly solid alternative to today's electronic dance and top 40 pop music (and the lack of Auto-Tune is a notable improvement on it). My only gripe is that there are only three actual songs on the EP; however, Capital Kings are planning to release their debut full-length in January 2013, which is very reassuring for a pop/dance release of this caliber. I look forward to seeing the Kings' later releases!