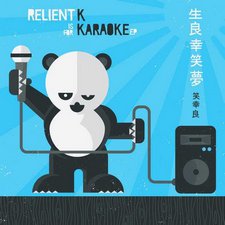 I've never been much for cover songs. They just never really appealed to me. Exceptions have to be made, however, like Ryan Adams' "Wonderwall," which is arguably superior to Oasis' original recording. And since the first time in 2003, when Eminem was losing himself, and Avril Lavigne was complaining about just how complicated things were, I have enjoyed going to Relient K shows and watching them break from their normal sets and play one or two "whatever the heck we want to play" songs. One time it'd be a Weezer song, and another time it'd be the theme songs to "Full House" or "The Office." Whatever it was, Relient K kept things fun. It was never meant to be taken too seriously; it was just some good fun to keep people engaged and having a good time. Even still, and harkening back to my original point, when I heard that the next Relient K record was going to be one filled entirely with cover songs, I cringed inwardly. It just didn't sound like fun, in the way going to Relient K shows and listening to them play covers for 3-5 minutes per set was.

But then I checked myself, and realized the band was probably under some kind of agreement to record an album in the first half of this year, and after extensive touring last year, just didn't have enough material ready to constitute an entirely new album. So, perhaps they worked out a compromise in which they got to have their fun on a cover record now, while they worked on making a better "full" album for later. The label gets two albums (well, three, considering the way they're releasing this "EP") for a little more than the price of one, more than likely. Well played. For now, then, we're all treated to this collection of covers, while we wait for the next full release from Matt Thiessen and the gang. We get seven of the tracks from K Is for Karaoke, and the "full release" comes out at the beginning of October.

The first word that comes to mind concerning this set of tunes is eclectic. Here's the lineup: Cindi Lauper, Tom Petty & the Heartbreakers, Justin Bieber, They Might Be Giants, Gnarls Barkley, Tears for Fears, and Weezer. In seven songs, they have attempted to include everyone that might possibly come into contact with K Is for Karaoke. Current teen fans of Relient K will probably immediately relate to the Biebs, as well as Gnarls Barkley. Older Relient K fans will be pumped to hear from Tears for Fears and Weezer, while mothers also in the car listening with their kids will be excited to hear from Tom Petty and Cyndi Lauper. And They Might Be Giants serves as a wild card. You gotta love it.

For the most part, these covers serve as faithful renditions. No real strides were made to mix or change things up, other than the obvious "Relient Fi-K-tion" of each classic hit. Depending on the track, this can be a good thing or a bad thing. For a song like "Here Comes My Girl" from Tom Petty, it's a major plus, considering the way in which Petty basically just speaks the verses on the original. Relient K made no effort to modernize these sections, and speaks them with quaint irony, before leading into the rousing choruses. It works really well, because it's fun, and doesn't take itself too seriously. On the opposite end of the spectrum is Justin Bieber's "Baby," which I really wanted to like. Yes, it does have its charms- the way Matt Thiessen delivers the lyrics gives the whole thing a sense of urgency and authority that makes the vocals more engaging than on the original. It just seems like more could have been done to make it fun, rather than being just a faithful rendition of a song that's just a couple of years old. And just straight skipping the Ludacris rap is unforgiveable. Matt Thiessen could have had a hayday with this, even completely changing the lyrics, just for the fun of it ("When I was thir-ty/I sang this co-ver" anybody?). We all know Thiessen could have made lemonade with it, so the fact that it's completely skipped gives the whole thing a rushed feel.

The whole EP fares a lot better when you can tell the band is having a good time, as in the above Tom Petty example. Heck, the EP, not coincidentally, starts with "Girls Just Want to Have Fun" from Cyndi Lauper, which happens to be another highlight. It doesn't get switched up very much at all, but it's fun. Fun is the absolute key here. This EP works best when you're tapping your foot with a smile on your face while you're listening to it.

Though I wasn't the biggest fan of the idea in general, the range and diversity of this collection makes me wonder what other songs got the Relient K treatment. K Is for Karaoke is hit and miss, but its hits are much greater than its misses, which are slight and mostly excusable. It will be fun to see what the rest of the collection sounds like in October. In the meantime, big fans should pick this one up now and buy the rest of the album in a few months when it's released. And for those more skeptical (or on a tight budget), head over to the JFH blog, where I've ranked the seven songs found here.

As a longtime fan of Relient K, I was initially disappointed to hear that Relient K's first project in nearly two years was a covers EP leading up to a full-length covers album. Even after spinning it once or twice, I still wasn't that impressed with all the songs that Relient K offered on the K Is For Karaoke EP since their original material is far better than the songs they chose to cover. However, after listening to it more, the EP began to gain traction with me (Except for "Baby" by Justin Bieber. I'm sorry, but not even Relient K could save those pathetic lyrics). The cover of "Girls Just Want To Have Fan" starts off the album excellently while the catchy chorus sends "Surf Wax America" to a roaring finish. "Doctor Worm" showcases Matthew Thiessen's skill in mimicking the singer's voice in a ridiculous song that could have been written by Relient K. The band's version of Tears For Fears' (you know, Relient K's favorite band in "In Love With The 80's") "Everybody Wants To Rule The World" is infectious and brilliant. The K Is For Karaoke EP is nicely paced and features a diverse selection of songs that is a solid lead-in to the Relient K's full-length covers album due out in October. - Nathaniel Schexnayder, 6/26/11

The Isaacs The American Face [House of Isaacs]

Chris Renzema Without You - Single [Centricity]

Various Artists Songs We've Been Trying To Tell You About (And Others We Haven't) Vol. 10 [JFH Music]

We Are Messengers God You Are (feat. Josh Baldwin) - Single [Curb/Word]