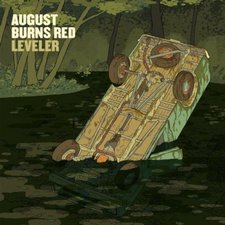 August Burns Red is a five-piece metalcore group from Lancaster, PA. Consisting of Brent Rambler on rhythm guitar, JB Brubaker on lead guitar, Matt Greiner on Drums, Dustin Davidson on bass, and Jake Lhurs on vocals, this band has been a huge presence in the metalcore scene since 2005, when they released their first official album, Thrill Seeker. With Leveler as their third studio release, they are a very, very successful and influential band. Seeing as there is already a review for the non-deluxe edition of the album, I will only be reviewing the bonus tracks here.

My favorite bonus track is "Empire (Midi)." Harkening back to the days of 8-bit games, this is a fun listen, and sounds a lot like something you would perhaps hear on a game like Super Mario Bros. It's cool to hear one of the heavier tracks on the album at stage one and in this more stripped-down version. It's a great and interesting listen for sure, though repeated listens can leave it sounding a little childish. "Internal Cannon" may be one of the most experimental songs the band has ever done, in that there is a full-on flamenco styled breakdown. The acoustic version is also very cool, turning the whole song into flamenco. It flows very well and does line up with the original, though the original is probably better. It's a good listen for those who like the more technical moments of ABR broken down into acoustic format and without screamed vocals. Now, for the next track, we have to review a bit of ABR history. You may not know this, but ABR has actually had three vocalists. In 2004, the band released an EP titled Looks Fragile After All. Jon Hershey did vocals for that EP, and it was the only released work he did with the group. However, he formed the experimental rock group Bells, and they did a cover of "Pangea." They took one of ABR's faster songs, and converted it to a cool, calm, instrumental alternative piece. It may even be better than the original. Finally, "Boys of Fall (Performed by Zachary Veilluex" is a piano take on the original song from the album. I'm not really a piano person, but it's still fast and impressive.

There aren't really many pros and cons, but I'll go on anyway. Pros are the experimentation in the bonus tracks. A lot of metalcore groups just release acoustic versions or live versions of songs as bonus tracks, but don't really go much further. I like how ABR didn't just do acoustic versions. Also, the 8-bit take on "Empire" is something I hadn't heard before, and it's original. Cons would be that it would've been cool if the screamed vocals could have been converted to Midi, and if you were hoping for vocals on Bells' cover of "Pangea," you may be a little let down. Now, the question is, would I repurchase the entire album for the deluxe tracks? I would say yes, because without the deluxe songs, this is my second favorite August Burns Red record; I would highly recommend it.