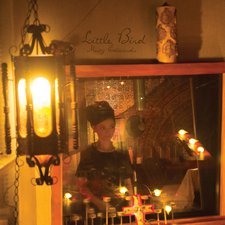 Misty Edwards' Little Bird could easily slip by unnoticed at the end of the year, but it's one worth discovering, as a veteran worship leader takes a step back from the familiar territory of corporate worship and focuses on exploring the spaces where sacred and secular converge.

"Mystical" comes to mind when attempting to describe the effect of Edwards' songs, both in their eclectic sound and their focus on themes like God's invisible nature, the hope of resurrection, and His future reign. "It's like we're sitting in the dark and we don't know it," Edwards muses in the pensive piano opener "Womb of the Morning," which finally fades into the haunting sonic atmosphere of "Invisible One." All throughout the album, these songs invite the listener to wonder, pay attention, and reflect, rather than dazzle them with catchy choruses and big sounds. A large part of this record's beauty is in its restraint, even with the big ideas she strives to share. The sound ranges from ethereal to earthy, and, in its best moments, mixes a little bit of both. "Little Bird" offers both a letter of knowing to Edwards' younger self and a meditation on the future resurrection wrapped in a bluesy vibe. "Audience of One" infuses influences of world music with a passionate praise song, and "Center of the Universe" closes on a Revelation-themed imagining of the second coming of Christ.

Like many albums, this one has the weakness of stacking the best songs at the album's first half and losing steam toward the end. Things start slowing down in the middle when "Killing Me with Mercy," a beautiful song in its own right, strays a little too far into worship territory to fit in with the singer-songwriter intent of the record. From there, things start to lose momentum and the songs turn less memorable, but that's a small caveat for an otherwise lovely record. For the most part, Little Bird closes out the year on an elegant and quietly powerful note.