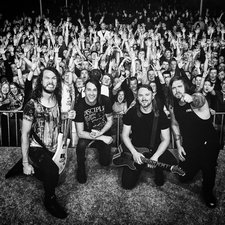 
As anticipation for Disciple's 11th studio album builds, the band decided to hold fans over with a free four-track EP, selecting highlights from their recent performance at Denmark's annual RiverFest. Though this is not the first time they've released live content (they included eight short concert videos on their greatest hits album last year), it is the first time in the band's 24 year history that they've officially released live audio recordings. Because of this, a four song live EP seems somewhat anticlimactic--especially because they posted videos to twelve songs from this event on their YouTube page.

There doesn't seem to be anything particularly unique about this event in Denmark, instead it feels like a snapshot on one of their worldwide tours. However, the fact that this isn't a special performance in a unique venue communicates that the band gives everything they've got for every performance--especially lead singer Kevin Young. While the sound quality and overall mix may not be up to par with what we've come to expect from Disciple, they are both strong enough to effectively convey the band's energy and commanding stage presence.

"321" kicks things off strong with some southern hospitality and fun shout-along lyrics, even if it cuts off the second and third verses. "Regime Change," one of several career highlights for the band, opens with dirty trade-off guitars between Andrew Stanton and Josiah Prince before bursting into a full-blown rock assault with Kevin Young singing and screaming about dying to his old self and letting Christ rule in his life. "Radical" keeps the momentum going as a bold proclamation of faith over brutal guitars and tight drum fills. The bridge of "Radical" is the only softer moment on the EP, and also the only spot that truly highlights Young's impressive clean vocals. Before you know it, the fight song "Game On" steps up to the plate as the album closer. As the song finishes with a mini-breakdown you are left wanting more face-melting tunes, and maybe a slower song to help the heaviness sink in.

With only two songs from Scars Remain, one from Southern Hospitality, one from their most recent record Attack, and nothing in their radio-friendly style, the Live In Denmark EP is not nearly as comprehensive of a live album as the band deserves. As it is, Live in Denmark is a nice treat for Disciple fans, but a new song or a slightly more extensive track list would have added tremendous value to this release. With this EP currently being offered for free on Noisetrade, there is no reason for any Disciple fan to pass up the opportunity to grab a download.