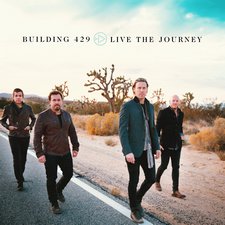 
From the big guitar riffs of their 2004 debut, The Space In Between Us, to the pop-oriented 2015 We Won't Be Shaken, Building 429 has more or less provided a snapshot of the current trends of CCM radio with each of their releases. Their latest offering Live The Journey continues in this vein, fitting perfectly into their catalog of uplifting tunes.

All of the tracks on Live The Journey, except for the ballad "Always Only You," fit the mold of a standard mid-tempo pop/worship anthem. The lack of high energy songs in no way hinders the pacing of the album as, from start to finish, the album is quite fluid. The three singles "You Can," "The Journey," and "1,000 Promises" are decent selections to represent the album, but to one degree or another, they all contain varying amounts of weak songwriting and predictable structures. Lyrics like "it's okay not to be okay," "I wanna see the mountains move," and "I can conquer a giant" are prime examples of how the songwriting can sometimes feel too vague, overused, or both. On a more forgettable note, "Assurance," "Shame Doesn't Live Here," and "Closer" don't leave any lasting impression, aside from getting the part of the chorus that contains the title cemented in your head.

When the band mixes in more unique characteristics to their songs (at least in comparison to the other tracks on the album), the result is much better. Breaking the string of four average pop/worship songs, the fifth track, "Joy Unspeakable," introduces an almost bluesy electric guitar (think Tauren Wells song "Known") while lead singer Jason Roy sings tenderly about trusting in Jesus through difficult circumstances--a prominent theme of the record. Similarly distinct, "I Still Believe" opens with a Coldplay-esque string melody that is catchy and used well throughout the song. "I Still Believe" is a testament to holding the Christian faith in a "post-Christian America," a message that is complemented nicely with "The Same God," which is about Jason Roy's personal testimony of belief through the years.

As always with Building 429, Live The Journey will give listeners a great deal of encouragement. The production is top notch, the messages presented are accessible to many, and although they do stick close to the formula, they do have a slight distinction from their many counterparts in Jason Roys unmistakable raspy vocals. In the end, Live The Journey is recommendable to fans of the band and fans of artists like Jeremy Camp, Hawk Nelson, and Sidewalk Prophets.